Paul Polman says businesses must be part of society's solution

SINGAPORE -- When the United Nations issued its 17 Sustainable Development Goals, which were adopted by the organization in September 2015, Unilever Chief Executive Paul Polman stood out as the only business leader who took part in drafting the document.

The role of business is "to solve societal problems," Polman told the Nikkei Asian Review in a recent interview in Singapore, where he was attending an international public-private-sector conference.

The opportunities for companies like Unilever in Asia's emerging economies are matched by the environmental and social challenges in the region.

Since taking over as CEO of Unilever nearly nine years ago, Polman has demonstrated his enthusiasm in pursuing a sustainable-business strategy in emerging economies -- most notably in Asia -- from where the company's growth is increasingly centering. It is a strategy to align the company's business objectives with solutions to those environmental and social problems, rather than being the cause of or exacerbating them.

Tackling sustainable development goals in the developing world provides "enormous economic opportunities," he said. If Unilever keeps proving his vision to be correct, his strategy may well long outlive his tenure at the Anglo-Dutch consumer-goods giant.

Since its origins in the late 19th century, Unilever has sought to address social issues. Sunlight bar soap, one of the company's original products, tried to address the hygiene problem in Britain's Victorian era, which was still a developing country by today's standards. 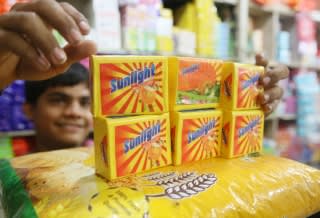 Sunlight bar soap is displayed in a store in Mumbai. (Photo by Keiichiro Asahara)

As a more recent example, Polman points to Pureit, Unilever's water-filter product line that was developed by the company's Indian subsidiary, Hindustan Unilever, to address the needs of hundreds of millions of people lacking access to clean water and sanitation. Pureit was introduced in the country in 2008 after a four-year testing period. The company later introduced Pureit to China, Southeast Asia and elsewhere. "It is gradually growing into a global brand," Polman said.

In June 2015, Unilever -- the owner of such globally recognized brands as Dove soap and Lipton tea -- became the first major multinational corporation to publish a human-rights report, which self-evaluated how the company and its value chain were implementing the United Nations Guiding Principles on Business and Human Rights, which was adopted by the U.N. Human Rights Council in 2011. Unilever's participation in the 17 sustainable development goals was a next step. 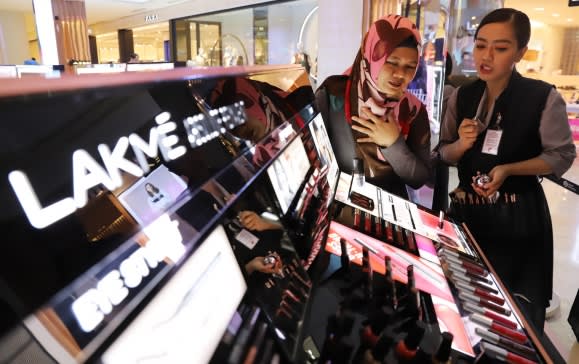 Lakme, a major local cosmetics brand in India, went on sale in Indonesia in September, after receiving halal certification. (Photo by Shinya Sawai)

The 61-year-old Dutch-born executive is encouraging Unilever teams in various markets to identify uncultivated local needs, many of which are connected to poverty, poor hygiene and other related issues. "Increasingly we develop our brands in many parts of the world," he said, and the company is trying to meet the consumer needs in those markets. "The center of our expertise, increasingly, is being developed across the world."

Late last month, Unilever announced its acquisition of Carver Korea, a South Korean maker of skin-care products for roughly $ 2.7 billion. Earlier in September, it introduced its Lakme cosmetic products, a major local cosmetics brand in India, to Indonesia and are halal certified to conform with Islamic law. If it succeeds in gaining the support of Muslim women in Indonesia, the company may introduce the line to other Muslim markets as a halal cosmetic brand. Polman said that some of its emerging-market-born brands could become global brands, while others might be limited to regional or local markets. Even if a brand does not reach a global scale, he said, "These days, if you have a big brand just in China and India, you are already covering one third of the world population."

More than 40% of the company's total revenue last year came from a geographical segment comprising Asia, Africa, the Middle East, Russia, Turkey and Ukraine, compared with 31% in 2007.

"Most of our growth is taking place in emerging markets," he said. With projections that about 80% of the world's population will live outside Europe and the U.S. by 2050, Polman said Unilever, which has its products sold in more than 190 markets worldwide, is "well-placed to capture that growth" associated with demographic trends. Some global consumer-staple companies, such as Procter & Gamble and Nestle, have seen a slowdown in growth in emerging economies in recent years. Unilever, which has a higher exposure to emerging markets than its rivals, saw its revenue growth in continuing businesses rebound in 2015. Many of Unilever's competitors are also competing in sustainable business practices, but Polman is the most vocal in advocating that model.

Soon after becoming Unilever's chief in January 2009, Polman said the company would focus on creating long-term value and would not attempt to accommodate the interests of short-term stock investors. He introduced the Unilever Sustainable Living Plan in November 2010, laying out how the various parts of the company would operate. The plan set targets on such items as green energy usage and the sustainable sourcing of agricultural materials. In 2011, Unilever stopped disclosing profit figures in its first- and third- quarter performance announcement, as Polman said quarterly [earning reports] encouraged short-term thinking in the market. The company only reports revenue and its dividend for the first and third quarter.

"If a business is only run for shareholder profits," Polman said, "it loses its reason for existence," noting that the average lifespan of a publicly traded company in the U.S. has fallen from about 65 years a half century ago to just 17 years today.

"If you want to be in business for a long time, which I think is an objective for most companies, you need a business model that responds to a long-term [value creation], which requires responding to multiple stakeholders," he said. Many stakeholders -- including employees, consumers, shareholders, suppliers and partners -- want to be associated with companies that make positive contributions to the world, he said.

"If you are a long-term investor like a pension fund, it is good to have stocks like ours that give you a long-term compounded return," he said. Indeed, 70% of the company's shareholders have owned its stock for seven or more years, according to a company spokesperson. 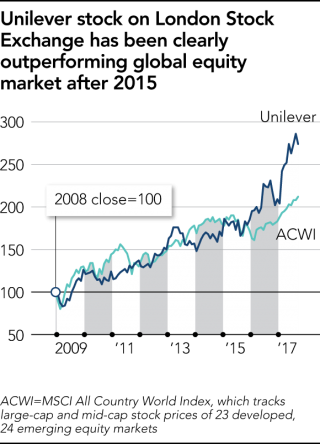 Societe Generale analyst Warren Ackerman said in a research note last month that Uniliver is the best among consumer-staples stocks for investors "to position for emerging-market economic recovery," adding that the company "offers one of the best combinations of revenue growth, margin and cash returns to shareholders" toward 2020.

Polman said that with all the efforts to address global-scale issues, "there was no financial compromise," pointing out that Unilever's revenue growth rate has been double the overall market growth rate. He said the company has increased its market share in most of its businesses and that its profitability has increased.

Kraft Heinz's acquisition bid in February was a wake-up call to Polman and his fellow board members, who immediately rejected the offer, which valued the company at $143 billion or about $50 per share, with an 18% premium, claiming the offer significantly understated the company's value.

As a result of the review, the company announced in April that it will sell its margarine and other spread brands, as consumers were rapidly switching to real butter, and that it was discontinuing the Timotei shampoo brand. The company also raised funds in debt for a share buyback and a higher leverage. 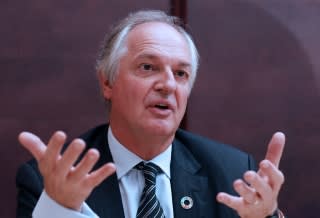 Polman says that sustainable development goals by the United Nations are seeds for business opportunities. (Photo by Shinya Sawai)

"What you clearly saw [in the acquisition attempt] was that the sterling was weakened because of the Brexit when there is an abundancy of money out there," Polman said. (The British pound is the main currency for trading the company's stock.) "Interest rates are low, leading companies to be enormously leveraged, and many [investors] are seeking short-term returns," he said, "so we just needed to make sure that we stay independent in such an environment."

Polman acknowledges the difficulty in achieving all of the company's sustainability targets. Unilever has 170,000 employees, in addition to a vast, complex supply chain with more than 80,000 direct suppliers and a larger number of indirect suppliers, whose practices are difficult to completely monitor and control.

For example, Unilever is one of the world's largest buyers of agricultural raw materials, such as palm oil and tea leaves, and the plantations on which they are grown are frequently accused of environmental damage and human-rights violations, making the company a target of criticism.

"I know some things are simply not possible because they may require bigger system changes," Polman said, citing an example of palm oil plantations in Malaysia and Indonesia, where many people work to get out of poverty despite adverse labor conditions. "How do you square that with prevention of deforestation or pollution?" "But that doesn't mean that you should not keep trying," Polman said. The company is implementing policies on responsible and sustainable sourcing, including palm oil. Unilever also is building and operating tea plantations, in Africa, Vietnam and elsewhere, to ensure that high standards are met.

Polman said that when people working in the supply chain are treated fairly, they are more likely to be motivated and productive, which "makes economic sense." The company is increasingly witnessing that sustainable palm oil plantations have a higher yield and provide better livelihoods.

A growing number of institutional investors are looking at the principles of responsible investment. "Many more high-net-worth individuals are increasingly looking at so-called impact investing," Polman noted.

The prevailing wisdom in the latter half of the 20th century was the shareholder primacy theory of economist Milton Friedman, which says the role of business is to generate profits for shareholders. "But that has already proven to be too narrow [sighted]," Polman said.

"Business simply cannot succeed in a society that has failed," Polman said. "If that is the case, businesses have to be part of solution, not part of the problem, to be around for [the] long term."