Traffic during Japanese holiday sale proves too heavy to handle

TOKYO -- A traffic surge took down Uniqlo's online store just as the retailer was launching a major sale in Japan, revealing a system weakness that could hinder parent Fast Retailing's growth strategy.

The site crashed on Thursday morning -- Labor Thanksgiving Day in Japan and the first day of the casualwear chain's annual "thank you festival" sale. The promotion typically has a significant impact on Uniqlo sales.

The site was back up as of noon on Friday, bearing a message that it reopened at about 11 a.m. The message explains the trouble started around 9 a.m. on Thursday due to huge user numbers and warns the store could become unstable if traffic spikes again.

Discounts on select items originally offered until Friday have been extended to Saturday for online customers only.

As bargain hunters filled Uniqlo's real-world outlets across the country on Thursday -- chasing deals on warmth-retaining heattech garments and cashmere sweaters -- complaints began to snowball online. Customers vented frustration about the site being inaccessible, or otherwise failing to show products or process orders. 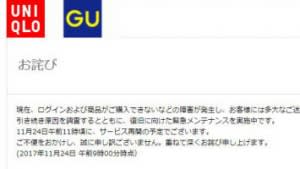 This notice, apologizing for the service outage, was displayed on Uniqlo's Japanese site as of 10:30 a.m. on Nov. 24.

"We had expected a surge in access volume to a degree, but it actually far exceeded our expectations," a Fast Retailing spokesperson said. Apparently, the number of shoppers using Uniqlo's smartphone app was particularly overwhelming.

GU, another brand in the Fast Retailing group, also had problems.

The company has dealt with excessive user traffic before. But "this is the first time we've had such major online trouble," the spokesperson said.

Though this may be a temporary hiccup, the lapse is still worrying given Uniqlo's emphasis on expanding online sales. The domestic chain of some 830 physical outlets has little room for further expansion, with few viable locations for additional stores.

CEO Tadashi Yanai wants online sales to account for 30% of all domestic Uniqlo sales "as early as possible," up from the current 6%. This is a key aspect of the group's mission to achieve total sales of 3 trillion yen ($26.9 billion) in a few years.