Vietnam emerging as the next outsourcing powerhouse HO CHI MINH CITY -- Vietnam wants to be the next big thing in business process outsourcing -- an ambition that was clear for all to see at an industry conference in the country's commercial capital on Thursday and Friday.

The IT Outsourcing Conference 2017 in Ho Chi Minh City attracted some 500 representatives from international and local companies. On the agenda for the second such event: turning what is already one of Southeast Asia's hottest outsourcing destinations into a true go-to hub.

Vietnam's IT sector is benefiting from government policies and incentives, coupled with a young and tech-savvy workforce. The population under 35 is estimated at more than 50 million. 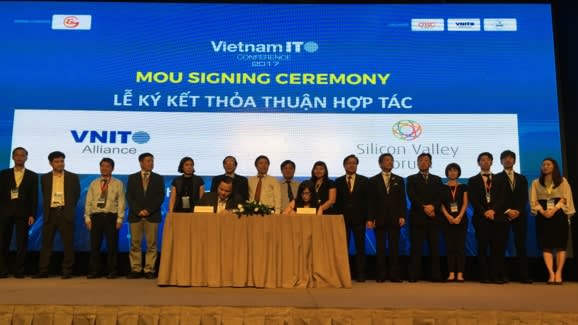 At present, over 1,000 IT companies employ around 80,000 workers in the communist country. Some 40,000 new IT graduates enter the job market each year, providing a steady supply of fresh talent.

All of this is quickly raising the country's profile. Vietnam jumped five places, to sixth, in U.S. consultancy A.T. Kearney's 2017 Global Services Location Index -- behind India, China, Malaysia, Indonesia and Brazil. Vietnam's position in the ranking of offshore business destinations reflects its growing popularity as a BPO provider, A.T. Kearney said in a report in September.

The following month, PwC's "Spotlights in Vietnam" report for the Asia-Pacific Economic Cooperation summit ranked BPO among the five hottest sectors in the country for the next few years, along with retail banking, solar and wind energy, luxury hotels, and modern agribusiness and food.

Vietnam's BPO industry achieved annual growth of more than 20% in the decade to 2015, when it was worth $2 billion. This was still a far cry from the Philippines' $22 billion sector -- the biggest in the region -- but political instability in the Philippines is believed to be creating an opening for newcomers.

Vietnam's sector has also developed differently than those of the Philippines and India, which have succeeded with call center services for English markets. Vietnamese players have focused on document process services for more than 20 different language markets -- including data capture, image processing, data categorization and data updating.

"We don't compete against the Filipino or Indian peers," said Frank Schellenberg, the founder of Digi-Texx, the first and most popular BPO provider in Vietnam. "We provide services in which Vietnam has more advantages and which are supported by government incentives."

To further strengthen the industry, the Vietnam IT Organization Alliance at this year's Outsourcing Conference signed three memorandums of understanding with U.S. and Japanese partners: the Silicon Valley Forum, the Vietnam IT Development Group and the Shonan Industrial Promotion Foundation. The deals involve support on technology and marketing. Lam Nguyen Hai Long, chairman of the VNITO Alliance and chief executive of Quang Trung Software City, speaks to reporters at the conference.

The plan is to cultivate Vietnam's BPO industry over the next 10 years before moving on to knowledge process outsourcing, which requires higher-skilled staff and specialists.

"This will be a good period of time for Vietnam to expand as well as upgrade the BPO industry, from the current low and medium product segment to a higher and complicated level," Hai Long said.

At the moment, dozens of companies in Vietnam offer BPO services and specialists. Many of them provide BPO as part of a broad suite of IT and other services.

Viet Ho, chief product officer at Russell Investments -- a BPO client of Vietnamese partners -- said the country is increasingly attractive thanks to its strong IT outsourcing sector. Having BPO and ITO services in one place can reduce costs and complexity for offshore customers.

NashTech, a brand of U.K. recruitment and outsourcing company Harvey Nash, has a staff of over 2,000 in Vietnam. Based on its existing technology, it continually updates its services to suit each BPO project. "This saves costs and quickly enables our workers [to carry out] many different projects," said Tam Truong Hong, director of business process services and human resources services in Vietnam.

She added that less than a third of her company's workers cover the BPO segment, which contributes 20% of total revenue but accounts for as much as 50% of net profit.

Surveys show that the biggest selling point of Vietnamese BPO services is inexpensive labor. Costs come in 50% below those in major Chinese and Indian cities. Company representatives and clients mingle at the conference.

However, Vietnam's BPO providers are not relying on low costs. They know competition with even newer players like Myanmar -- along with the rise of automation and robotics -- will change the game.

So the top Vietnamese providers are preparing for advanced BPO -- tasks such as data mining, analysis and innovation.

Swiss Post Solutions Vietnam, with a team of roughly 1,200, makes a point of going beyond filling basic orders. "We study the most effective and economical solution for clients instead of just doing what they asked us to do," said Franc Parcon, the company's chief customer delivery officer.

Not to be outdone, FPT, Vietnam's biggest IT company, also plans to invest more in advanced BPO services following its divestment from retail and distribution arms.