HANOI -- While Line, Viber, WeChat and other international messaging platforms are fighting for dominance across Southeast Asia, none has made much headway in Vietnam. 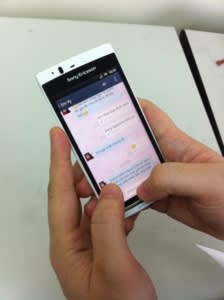 Zalo is a homegrown messaging app that dominates the Vietnam market.

There, a homegrown messaging app called Zalo is being used by around two-thirds of the country's smartphone owners.

Created by the country's top Internet company VNG, the success of Zalo shows that foreign brands can never take the Vietnam market for granted: Localized features and aggressive marketing can count for a lot. "We focus on fast and reliable messaging. Our product is designed to run well on Vietnam's unreliable 3G infrastructure and popular low-end phones," said Vuong Quang Khai, executive vice president of mobile and web at VNG.

Hau Nguyen, a student at the National University of Civil Engineering, uses Zalo to chat with friends and to make calls when there is a Wi-Fi or 3G connection. Most of his friends with smartphones prefer it to other apps, he says. "It's fast and convenient. It's also better than other messaging apps for smartphones with lower RAM and smaller chips, because it doesn't lag," Nguyen said.

Zalo has attracted 12 million users since it was launched in 2012, according to Khai. In Vietnam, Zalo has been the most downloaded mobile messaging app on both Android and iOS for more than a year. The app is also increasingly popular in countries with a large Vietnamese populations, such as the U.S., South Korea and Russia.

Its decision to adopt a blanket approach to advertising has clearly paid off, industry watchers say. Zalo had spent more money than any other company in Vietnam to secure its share of the multi-media internet messaging market, said Anh-Minh Do, editor at Tech in Asia.

VNG is estimated to have spent $2 million on marketing activities in 2013. By contrast, rivals have spent very little on advertising in Vietnam, according to Tran Quoc Toan, marketing manager at Appota, a mobile content distribution platform. "The key to Zalo's success is spending huge amounts of money on marketing," Tran said. "In 2013, Zalo covered all mobile ad networks and websites, even television. They used a number of endorsement people for their marketing campaigns."

Vietnam has one of the fastest-growing smartphone markets in the world due to its large population of tech-savvy young people and expanding number of consumers with disposable income. There are currently about 19 million smartphone users, mostly concentrated in urban areas, according to Nielsen, the consumer research company. But while this rapidly growing sector offers many opportunities, foreign Internet companies hoping to penetrate the market may find that domestic firms such as VNG have a competitive advantage.

"If a foreign company wants to launch an app in Vietnam, they should understand Vietnamese culture and localize to adapt to it," Toan said. "This means localizing Vietnamese language in apps and games, integrating a Vietnamese payment gateway and using local distribution channels."

Experts say Zalo has focused only on its home market and that is probably a smart move, at least in the short term. "This could be a good strategy for them. There's still a lot of room for this market to grow," said Vaughan Ryan, managing director at Nielsen in Vietnam. Prices for 3G packages are going up in Vietnam, so more consumers will rely on messaging apps to save money, he said.

Focusing on domestic consumers' needs is a strategy that has proven successful for VNG in the past, from online gaming to its social network and entertainment portal Zing.vn.

Indeed, Zalo's success might be due as much to the fact that it's homegrown as to the money the company spends on advertising. Vietnamese consumers are heavily patriotic, especially as tension with China escalates. This extends to valuing domestic products, including technology.

"It's a Vietnamese app, so I encourage it," Nguyen said.