TOKYO/OSAKA -- The spending habits of foreign tourists in Japan are changing, shifting away from bulk buying of expensive products toward trendier ones popular with Japanese consumers.

On the afternoon of Oct. 5, a discount electronics shop in central Tokyo's Chiyoda Ward was crowded with tourists who had come to Japan during China's weeklong National Day holiday.

"This app is very informative and convenient," said a woman in her 30s from the northeastern Chinese city of Dalian, showing off the "Xiaohongshu" overseas shopping app on her smartphone. Hugely popular among Chinese women, the app receives nearly 30,000 reviews every day, she said, adding, "I want to spend 80,000 yen ($771) on cosmetics and other goods for myself."

In late September, at a branch of the Matsumoto Kiyoshi drugstore chain near Tokyo's famed Sensoji Temple, a 24-year-old Chinese woman was texting her mother back home about which products to buy. She said she was visiting Japan for the first time with two of her friends. "I look at people's personal blogs for shopping ideas," the woman said. Among her purchases were Calbee's Frugra granola and Megurism, an eye mask from Japanese consumer products maker Kao.

Give us what you want

A year or so ago, Japan was in the midst of the bakugai ("explosive buying") phenomenon. Foreign tourists, particularly Chinese, would load up on products and bring them back home, either as gifts or for resale. Now the boom is waning and per capita tourist spending is falling.

A Matsumoto Kiyoshi executive said buying patterns have changed. Chinese tourists in Japan use the internet to learn about the latest products popular with Japanese, the executive said. Previously, demand was driven by products that Chinese people prefer. Now the tourists "have come to purchase what is currently selling well in Japan." 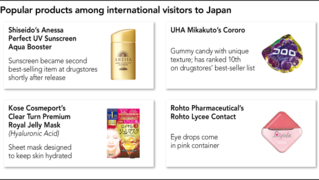 This trend is showing up in the data. According to Tokyo-based market research specialist Customer Communications, a chewy fruit candy made by UHA Mikakuto called Cororo was the fifth-best-selling product in June among foreign tourists. Although its popularity has waned somewhat, it has been ranked in the list of ten best sellig products since July, said the company, which analyzes data on 6 million buyers annually at drugstores around Japan.

"Foreign tourists gather information at a faster pace now," said a Shiseido official. "The speed at which they react to new products is almost as fast as Japanese people."

Kose, another cosmetics company, held an event on Sept. 10 in the western Japanese city of Osaka, letting potential customers try out products. The two-day event, the "Kose Beauty Festa," featured 30 influential bloggers from overseas, a first. A Kose spokesperson said the bloggers wrote about products showcased at the event, including items that have not yet hit store shelves.

Matsumoto Kiyoshi, too, regularly checks overseas blogs. It also gleans information on foreign tourists' nationality, sex, age and other data by linking their passports to sales data, using the information to create attractive store displays. "We need a marketing strategy as detailed as one aimed at Japanese consumers," said the Matsumoto Kiyoshi executive.

One reason why the overseas buying is slowing is the growing number of repeat visitors to Japan. These tourists typically buy cosmetics and sundries for their own use. While drugstores have managed to maintain brisk sales, business is less good at stores dealing in luxury brands and expensive items. Sales at tax-free stores operated Laox, which is owned by Chinese retailer Suning Commerce Group, tumbled 53% in August from the same month last year. The drop is explained by stagnant sales of wristwatches that sell for several hundred thousand yen. Per-customer sales in August averaged about 20,000 yen, down 46% from a year ago.

"As the bakugai has diminished, sales per customer fell more than expected," said Laox President Luo Yiwen. "We cannot compensate for the shortfall, no matter how many beauty products we sell."

Hiroshi Onishi, president and CEO of department store operator Isetan Mitsukoshi Holdings, acknowledged that sales have fallen at its duty-free store it opened in January in the Ginza  Mitsukoshi department store. "Low awareness of the store, and a product lineup that was not appealing to foreign tourists in Japan are to blame," he said.

The types of products selling at department store Takashimaya's Shinjuku branch have changed a lot over the past year. During the March to August period of 2015, cosmetics accounted for 13% of tax-free sales. During the same period this year, that share more than doubled to 30%. At the same time, the share of luxury-brand bags and other high-end products fell from 35% of total sales to 24%.

As the bakugai trend tapers off, more overseas visitors are spending on "experiences." In late August, around 10 foreign tourists were making food samples -- the plastic models of food that one often sees in restaurant display cases in Japan -- in a building nestled in a residential area of northwestern Tokyo.

They squeezed bags of simulated whipped cream into containers of ersatz fruit. One participant from Singapore was happy, saying it was an experience unique to Japan.

The event was offered by Tokyo-based Yamato Sample Seisakujo, which supplies food samples to restaurants. The company started the event for foreign tourists with cooperation from Veltra, a booking site for overseas tours. 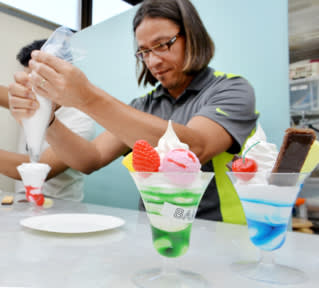 Nankai Electric Railway teamed up with Nagoya-based hair salon Atelier Haruka to open a hair and makeup salon inside railway's Namba Station in Osaka on Sept. 30. The shop offers hairdos and makeup by professional artists. It also has a package that includes an hourlong kimono rental -- and help putting it on -- along with hair styling for 7,500 yen, not including tax.

The station is the main gateway to Osaka from Kansai International Airport. "We will step up preparations to handle foreign tourists in the area of beauty," a railway official said.

A senior official with Tokyo-based JTB Tourism Research & Consulting stressed that it takes more than selling products to win the hearts and minds of foreign tourists. "We need services, including recommending to buyers of sake, restaurants where they can enjoy sake as well as good meals, or having them visit the brewer."