FRANKFURT, Germany -- The German car giant Volkswagen has been rapidly shifting its focus to electric vehicles in the wake of a scandal over falsified emissions data on its diesel cars in 2015, and by China's clean-energy plans. But this sudden course change may be putting VW in an uncomfortable position -- how to procure batteries cheaply enough to make the cars affordable, while still turning a profit.

At the Frankfurt Motor Show in September 2017, it upgraded the plan to more than 50 electric models and global sales of 3 million cars.

In early June 2016 -- two weeks before the initial announcement -- Volkswagen's chief executive for passenger cars, Herbert Diess, was in the Norwegian capital of Oslo to study the EV market there. Norway is the only country with a mass EV market, accounting for over 20% of new car sales in the first 10 months of 2017, up from 17% in 2015 and less than 1% in 2010. Including plug-in hybrids, EVs now have a roughly 40% share of the Norwegian market. 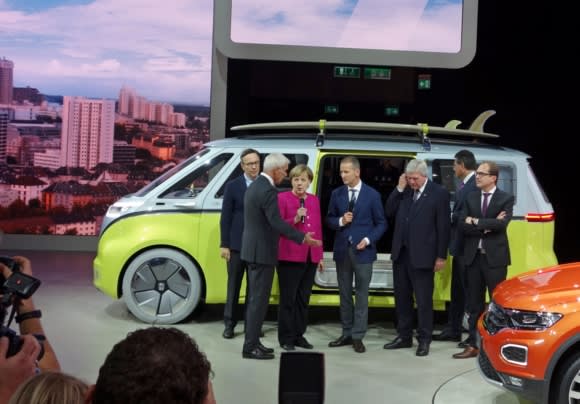 It is unusual for the head of the brand with annual sales of roughly 6 million vehicles to spend a whole day surveying such a market. A person present at the survey said Diess wanted to see things with his own eyes, and listened intently to the findings of the results of after-sales surveys, and to accounts of how the recharging infrastructure is used. The experience seems to have helped him make up his mind to make the big move into electric.

The company's big stumble with diesel almost certainly played a role, too.

As Japanese rivals were pressing ahead with hybrid technologies, VW had decided diesel would be its mainstay low-emission technology. But in September 2015, U.S. environmental regulators revealed that the company had used special software to reduce emissions of pollutants during laboratory tests. The resulting "Dieselgate" scandal is widely regarded as one of the worst in automotive industry. It also prompted major European cities like Paris and Munich to consider banning diesel cars from their streets. In Germany in 2015, diesel accounted for about 50% of new car sales. That plunged to 34% in October 2017.

An even more important reason to make the shift to electric is China, which will introduce "new energy vehicle" (NEV) regulations from 2019. Under the new rules, EVs and plug-in hybrids must account for certain percentages of production and sales, with the aim of raising the ratio of NEVs to 40-50% of new care sales by 2030. 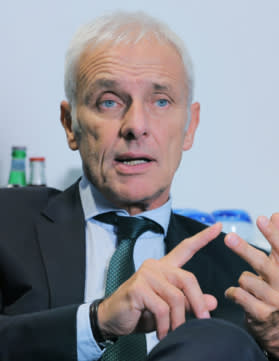 VW currently sells virtually no EVs in China. But Group CEO Matthias Mueller has set an annual sales goal of 1.5 million vehicles by 2025, roughly equivalent to the global sales of Mazda Motor.

"Volkswagen will become even more Chinese in the coming years," Mueller declared at the Auto Shanghai show in April this year. Currently, about 40% of VW's global sales are in China.

VW's sudden enthusiasm for EVs raises a number of questions that do not seem to have answers.

One of them is battery costs. At the Frankfurt Motor Show, Mueller said his company will earmark an all-time high of 5 billion euros ($6 billion) to procure lithium-ion batteries.

Batteries account for 20-30% of EV production costs, and are crucial in determining travel distances and power output. But automakers do not usually disclose how much they pay battery makers. In "Together - Strategy 2025," VW said only it will procure battery capacity of 150 gigawatt hours per year.

Many in the industry wonder why Mueller disclosed the budget figure. Asked by The Nikkei, he said: "It's impossible to produce these amounts by ourselves. We need to get into partnerships with appropriate partners." He did not elaborate.

One executive of a major battery parts maker gave a clue on this reply, saying VW's negotiations with a battery maker had fallen through.

VW is known for wrangling low prices in exchange for large orders. One battery maker reportedly pulled out of negotiations when VW tried this tactic to order batteries for EVs to be manufactured in China from 2018.

Only a handful of companies can supply large volumes of lithium-ion batteries for EVs -- Japan's Panasonic, South Korea's LG Chem and Samsung SDI, and China's BYD and Contemporary Amperex Technology among them. With automakers around the world trying to enter the EV market, battery makers may not see the point in supplying their products cheaply to VW .

As well, one Panasonic executive complained that German automakers can be difficult to work with due to their aggressive price negotiations.

Mueller said VW will team up with battery cell makers in China, Europe and the United States. His budget disclosure was probably a message to suppliers -- but not just to lure them into a relationship. VW also needs them to make more capital investments, as their existing production capacity is not enough for the automaker to achieve its ambitious targets.

VW hit another "battery wall" recently over cobalt, used for the electrode material of lithium-ion batteries. Since cobalt is found in only a few countries, it could present a bottleneck for EV production. 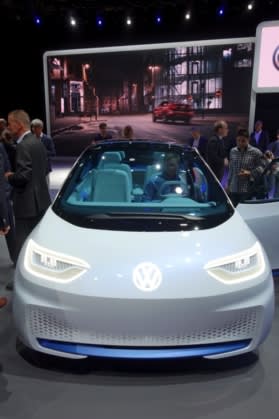 A model of the I.D. electric vehicle, which VW plans to start producing in 2019, is displayed at the Frankfurt Motor Show.

Between September and October, VW issued a tender to ensure long-term supplies by negotiating directly with mining companies. But it failed to attract many bidders, putting off miners by suggesting a price far below current market prices, according to a report in the Financial Times.

While an inflated sense of its own clout may be behind its battery troubles, the real concern is that VW will not be able to generate profits unless it can procure batteries cheaply.

VW has said it will roll out its electric I.D. vehicle in 2020 with a price tag about the same as existing diesel models, raising the question of whether it will break even. But Mueller dismisses any skepticism, arguing that the I.D. will be turn a profit, as its material costs will be lower.

But doubts persist. Even Daimler, maker of the upscale Mercedes-Benz brand, expects the profit margin on its EVs to be half that of existing cars for the time being, according to CEO Dieter Zetsche. Toyota Motor Chairman Takeshi Uchiyamada has warned that a hasty shift to electric models would push most automakers into the red.

Considering the reaction it has received from battery suppliers, VW may well be aware of the gloomy prospects for EV profitability.

In Norway, the government began offering tax incentives for EV purchases in the 1990s so they would cost about the same as diesel and gasoline vehicles. From around 2011, a variety of new EVs made their appearance and the market expanded rapidly.

If automakers choose to launch electric models without such subsidies, how will they offset the higher manufacturing costs? EVs will not sell unless they are affordable. The dilemma for VW and other automakers is that making them cheaper will also erode earnings.