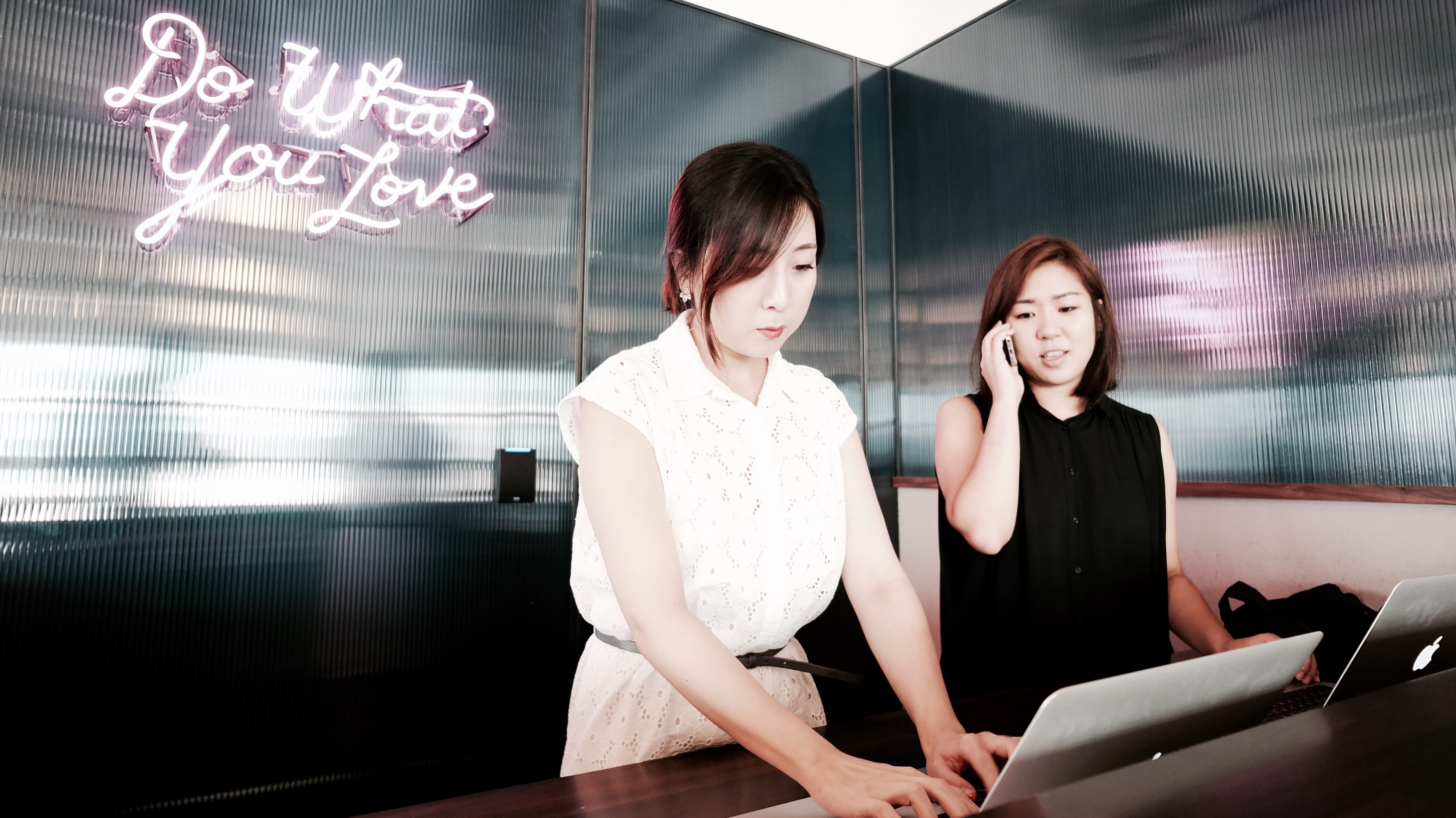 NEW YORK -- Co-working industry leader WeWork has set its sights on Asia for a major expansion. Established in New York in 2010 and valued at $16 billion by investors, the private startup has grown its network to more than 100 locations. Already in Shanghai and Seoul, with Beijing offices on the way, it plans to cover major Asian cities within 3 years.

Miguel McKelvey, co-founder and chief creative officer of WeWork, sat down with the Nikkei Asian Review to discuss plans for Asia, growing competition, creating a new working culture in the digital age and rumors of SoftBank investment.

Q: Last year you announced multiple property deals in Asia. Tell us how you plan your expansion in the region. A: It's a mix of strategy and opportunity. We want to be in the major cities in Asia by 2020, but there isn't a set number.

We planned to go to China as early as possible, because we felt it was important to our growth and because there was so much potential, but we knew it would take a long time to learn how to do business there. We were lucky to connect to John Zhao [Hony Capital CEO], and he wanted to work with us. Having a local partner helped us get through those challenges more quickly.

In South Korea, a key team member who has a Korean background was very interested in opening that market. He was able to make a lot of local connections quickly because of his background. That's one of the key reasons why Seoul opened before Tokyo.

We're considering and debating all the cities you would assume. Taipei isn't better or worse than Bangkok. If we find a partner we really like, maybe Bangkok comes first.

Q: You expanded through partnerships with Sino-Ocean Group and Hony Capital in China, and with Embassy in India. Will that be the model for other markets in the region?

A: Yes. Anytime we're able to make a relationship, especially with a real estate partner who has a large asset portfolio, it's much easier because then we can do multiple buildings with them. The economics and the deal terms can all be the same, rather than every single project being a negotiation.

There's the benefit to having strong partners, but sometimes you really want a particular building and it's a straight lease, and that's fine too.

Q: Does having a real estate partner, rather than being a tenant, change how you operate?

A: Having partners in Asia has not changed how we operate. At locations where we have a partner, we manage the space on a day-to-day basis. We have a 50/50 revenue share agreement with Sino-Ocean Group, who we've partnered with on locations in Shanghai, Hong Kong and Beijing. This model and structure is great because we are both equally invested in the success of the project. Having partnerships with local players has allowed us to successfully enter the Chinese market and scale more rapidly in Asia.

Q: How did you prioritize cities at the beginning?

A: A lot of our connection to our path was related to cities that meant something to our members conceptually: cities that are evocative of the future, of change, of growth. Part of our brand is the cities that we're in. They're important because they tell a story.

Q: How do you decide whether to enter a particular market?

A: A lot of it is intuitive, certainly supported with studies of local transportation, foot traffic, and potential competitors, but also by just walking in the streets and feeling it. The number of our members relative to the total commercial office market is so small that we haven't needed to be too targeted. With 1,000-3,000 person buildings, we're not reaching any kind of saturation.

It's a very entrepreneurial culture. We're not making some high-level plan and assuming it's going to work. Part of what's exciting about working here is that we're very empowering. We give people the opportunity to be "intrapreneurs," developing new things from the inside out. That creates opportunity and keeps the energy vibrant, which is important, because many of our members are also growing companies. We're aligned in that way and responsive to them.

Q: When will you open in Japan?

A: I don't have a date but we want to move quickly. In Japan our goal would be to have a few locations in Tokyo, the first within a year, and then see where we go next. 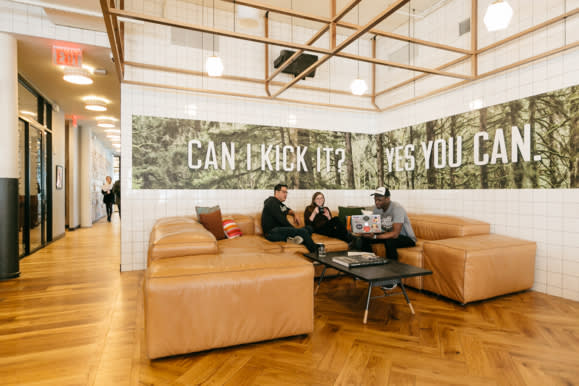 Q: Co-working is still a new concept. How do you market co-working and the WeWork brand?

A: We don't typically do major market campaigns. We build connections with people, businesses, communities, and then draw people in. Typically that works. There's a real benefit to people who like it here to share with their friends and bring them into the community.

Q: Have you made any cultural adjustments at your overseas locations?

A: I was concerned about how much we would have to change and adapt, especially going into China, specifically because we heard that many people are less naturally outgoing or willing to engage in networking events, or social and connective events. But so far it hasn't been as challenging as we expected.

Opening the doors and bringing people in is really how we test people's openness to connection and collaboration. For example, before we went there, a lot of people said people in London wouldn't be comfortable having some other company right on the other side of a glass wall. We couldn't test it, but we opened the building and now it's one of our strongest markets. So clearly people in London were interested in working this way, they just didn't know it yet. Q: Market research company Jones Lang Lasalle released a report which includes a prediction that by 2020 there will be 3.8 million co-working tenants worldwide. What's driving the demand?

A: Co-working culture seems to be an evolving mindset across the entire world, almost at the same time. The way people work is changing and evolving very quickly, so the market is growing very quickly. Whether we're a part of creating that culture or promoting it, whether we're an instigator of change or just here at the right time, we're very lucky that things are moving toward us.

Q: What's your strategy for winning customers in major markets, such as the US and China, where competition is growing?

A: Competition doesn't really concern us in terms of the market [size]. People are evolving from the traditional workspace and looking for opportunities to have a more vibrant working life faster than any of us could meet in terms of demand, especially if you expand that need to the enterprise companies we're working with now.

Q: What's your long-term view of the industry?

A: We want to be here for the next hundred years, so we're thinking about our contribution in a very big-picture way. Humans need connection. As [the] digital [age] creates separation and loneliness, people need opportunities to come into physical space and connect with each other. Whether we're involved in every single workspace in the world, or whether other people follow the trend and do that as well, we're going to be the place where that happens. We see that as our responsibility and as a long-term plan. We believe we're the ones who can best serve human beings and humanity. That's our big picture.

Q: There are reports that SoftBank is considering investing in WeWork through their new venture fund. Can you tell us about the prospects?

A: Having a partner like SoftBank would be empowering. From a strategic perspective it makes sense: the market in Asia is so big and more funding would allow us to make a big leap forward in terms of how fast we can address it. That's exciting to think about. Of course there's nothing to report until there's a signed document, but I think it would be great.

The overall strategy that SoftBank will have with that fund is interesting. If we did have the opportunity, obviously it's a global fund, and who knows who else will be a part of it. There could be affinity between the different companies, so potentially cool opportunities could come with it.