BANGKOK -- Entrepreneurs from North America and Europe are coming to Asia to fill gaps in the market and connect East and West.

Meet Paul McTaggart. While employed by U.S.-based travel website Expedia, the Canadian was struck by inspiration on a ski hill. His American wife told him that she wanted to get off the slopes, as she was worried about high medical costs if she hurt herself.

People should not feel constrained by fear of health care expenses, McTaggart thought.

Around the same time, McTaggart found out that his father was paying thousands of dollars a year for dental work in Canada, since the procedures were not covered by his insurance.

Zeroing in on the exorbitant cost of dental care in the U.S., Canada and other developed countries, McTaggart established Dental Departures in 2011. The medical tourism venture's website connects users with affordable dental clinics in emerging countries.

Sensing he had hit on something big, McTaggart went all-in: He sold most of his assets, from his car to clothes, and took his family to Mexico to get a firsthand look at the services available. From there, it was on to Bangkok, where he is working to expand the scope of the business.

The Dental Departures site has so far registered more than 4,000 clinics in 30 countries. Most of them offer high-quality dental work for 50-70% less than in the U.S. McTaggart's company takes a minimum 15% of the treatment price as commission. The site features more than 9,000 customer reviews, 90% of which appear to be positive.

As CEO, McTaggart is now negotiating with five potential investors in Asia. He says he feels that venture capitalists in the region are more likely to understand the global potential of Asian dentists and doctors.

In July, he plans to launch a similar service for cosmetic surgery. Essentially, McTaggart is bringing the mechanics of travel comparison sites like Expedia to the field of medical tourism in Asia.

Norwegian entrepreneur Benjamin Fauchald, meanwhile, is about to make it easier for Bangkok restaurants, bars and retailers to get noticed.

One restaurant at a time

In Thailand, relatively few establishments in such industries have websites of their own, Fauchald said. And searching for a particular restaurant on Google tends to dredge up a lot of irrelevant information. 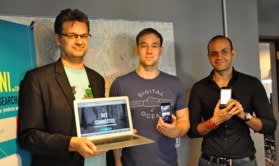 Enter Uteeni, a startup created by Fauchald and several partners in December. Fauchald holds the post of CEO. The service, which is set to launch in July or August, will offer online listings with pictures, location information and business hours in a smartphone-friendly format.

Prior to starting Uteeni, Fauchald was one of the founders of 180.no, a Norwegian telephone directory website set up in 2004.

Fauchald left that company in 2010 and, in 2013, went to Bangkok to start work on the Uteeni project. The venture painstakingly visits individual businesses, collecting their details and allowing them to customize their listing pages.

Uteeni plans to expand to Singapore within the year.