What company rankings say about the region's economy

BANGKOK -- Ranking Southeast Asia's top companies by market capitalization and net profit gives a good idea who the movers and shakers are in Singapore, Thailand, Indonesia, Malaysia, the Philippines and Vietnam. But the list also reveals important insights about what makes the region's economy tick.

One of the most striking results of the ranking is how few manufacturers can be found at the top of the list. Of 44 companies with a market valuation of more than $10 billion, only five are manufacturers: eighth-ranked Indonesian tobacco maker Hanjaya Mandala Sampoerna, 16th-ranked household product maker Unilever Indonesia, 23rd-ranked Thai materials producer Siam Cement, 27th-ranked alcoholic drink producer Thai Beverage and 28th-ranked Petronas Chemicals Group of Malaysia. If foreign-owned companies -- Hanjaya Mandala Sampoerna, a group company of U.S. tobacco company Philip Morris, and Unilever Indonesia, a unit of the British-Dutch company -- are excluded, then only three producers make the list.

While automakers and electronics manufacturers place highly in such rankings in developed economies, they are conspicuously absent from the top of the list in Southeast Asia. Among its other products, 11th-ranked Indonesian conglomerate Astra International also deals in cars, but only as a partner to Toyota Motor and other automakers. Japanese carmakers account for some 80% of new vehicles sold in Southeast Asia. The markets for smartphones, flat-panel TVs and large home appliances are similarly dominated by products by Japanese and South Korean companies, either made in Southeast Asia or imported into the region.

The automotive and electronics industries comprise a vast array of parts and materials producers, which creates an enormous number of jobs, and they are also research and development powerhouses. Companies in these sectors can also penetrate foreign markets, either by exporting their products or moving production overseas. At present, no Southeast Asian companies possess this kind of international competitiveness. Instead, they have relied on major foreign partners and have not nurtured their own ability to make inroads abroad.

Another takeaway from the ranking is that Southeast Asia's most successful companies operate in sectors that are well-protected by regulation. Of the companies on the list, 12 are banks, including second-ranked DBS Group Holdings, a Singaporean concern. Seven, including top-ranked Singapore Telecommunications, are in the telecom business, while five are in the energy business, including Thailand's PTT, in third. Together, these companies make up more than half of the top 44. Moreover, Airports of Thailand, which came in 40th, is a state-run company. 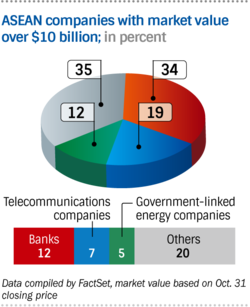 In many parts of the world, foreign companies and domestic players from other fields are barred from entering the financial, telecommunications and energy markets for security and other reasons. Because many governments in Southeast Asia hold shares in companies in these sectors, they have an incentive -- in the form of higher dividend payments -- to continue shielding these sectors from competition. Additionally, the lack of transparency in how these industries operate may breed corruption.

The negotiations for the Trans-Pacific Partnership, a U.S.-led trading bloc, are stumbling partly because Malaysia and Vietnam are resisting U.S. demands that their state-run companies be privatized to level the playing field between domestic and foreign businesses. With the increasing globalization of the economy and the increasing number of countries negotiating multilateral free trade agreements, many pundits argue that deregulation is unavoidable in Southeast Asia. Top-ranking Southeast Asian companies thus cannot afford to become complacent in the belief that regulation will continue to protect them.

More of the same

The ranking also shows that leading companies in Southeast Asia operate in just a handful of sectors. This contrasts markedly with Japan. The top 44 companies on the Tokyo Stock Exchange operate in a wide range of sectors: automobiles, telecommunications, banking, machinery, precision manufacturing, electronics, pharmaceuticals, real estate, trading houses, railways, insurance, securities, materials and consumer goods. Some of these companies are export-oriented, while others mainly serve domestic markets, allowing investors to easily diversify their holdings and reduce their risks. The movements of their stock prices are also far from uniform, with some offering stable returns and others promising rapid growth. Achieving a similarly diverse portfolio would be difficult in Southeast Asian stock markets.

Looking ahead to the creation of a single market in late 2015, the Association of Southeast Asian Nations launched the ASEAN Trading Link to integrate member countries' stock exchanges. Singapore, Malaysia and Thai bourses became the first to actually dip their toes in the scheme. Through an online network, a Thai investor can now trade Indonesian stock through a Thai brokerage even if it does not operate an office in Indonesia. An increase in transnational trades might help bolster the capital markets of the region, but the new system may not produce the maximum benefits if the leading companies of Southeast Asian nations all operate in similar fields.

The fourth point is that the region's stock markets do not necessarily reflect the actual competitiveness of individual companies. For example, while Thailand's PTT ranks third among the 44 leading companies, Malaysia's Petronas, a much larger oil company operating on a global scale, did not make the cut because it is not listed. Its group company, Petronas Gas, came in at just 31st. Among airport operators, Airports of Thailand came in 40th, but Singapore's larger Changi Airport Group, known as Asia's aviation hub, was not included in the list because it is not publicly traded.

Cross-shareholdings and many other details about Southeast Asian conglomerates like Central Group are not disclosed to the public.