Why Sri Lanka is snapping up Japan's used eco cars COLOMBO -- These days, visitors to Sri Lanka's largest city are in for an unexpected juxtaposition of old and new: On the one hand, colonial-era architecture and other vestiges of British rule; on the other, an abundance of shiny Japanese hybrids cruising the streets.

The sight came as something of a surprise to this reporter. After all, this was not Japan or the U.S. West Coast, where pervasive environmental awareness has created an ideal market for green vehicles. It was all the more surprising considering that Sri Lanka is an emerging economy with a per capita gross domestic product of around $3,800.

Susil Wijayaweera, a driver for guests at a Colombo hotel, owns a Toyota Axio. The compact hybrid sedan "has never gone wrong and is purse-friendly," the 58-year-old said, giving his trusted business partner a pat.

He purchased his Axio, a used model imported from Japan, in August 2014. According to the sticker on the windshield, issued by the Japanese transportation authorities, the vehicle was scheduled for its first safety inspection in July 2015, which means it was registered as a new car in Japan in July 2012. 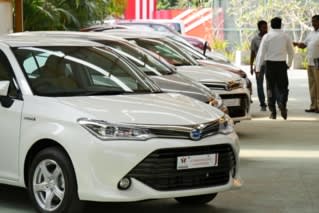 Dozens of Japanese vehicles are on display at a used-car dealership in a Colombo suburb.

But while the car was technically used when he bought it for 5 million Sri Lankan rupees ($35,000), Wijayaweera said that fact didn't bother him. That's because in reality, the vehicle was practically new at the time, with an odometer reading of just 108km.

High excise duties, which top 100% for some models, mean even used automobiles in Sri Lanka are extremely expensive.

But professional drivers like Wijayaweera are not the only ones purchasing their own sets of wheels. In the six years since the end of its civil war, Sri Lanka has rapidly rebuilt its economy, resulting in a remarkable increase in the numbers of wealthy and middle-income households that can afford to buy their own cars.

Japanese cars are particularly in demand because of widespread confidence in their quality and reliability.

Sri Lanka's used passenger car sales came to 56,000 units in 2015, double the previous year, according to data compiled by JB Securities, a local brokerage. Almost all of those were Japanese-built vehicles.

Wasana Trading Lanka, a used-car dealership in a Colombo suburb, had dozens of Japanese vehicles on display when I visited.

"Cars in white sell well," Asiri Dayan Merenchige, the dealership's director, said. "Cars with lots of functions are particularly in strong demand because owners can brag about them." The top sticker shows the vehicle was due for its next inspection in Japan in November 2016.

Instructions for switches are written in Japanese, which most local buyers cannot read. Inconvenient though it may be, owners don't mind, Merenchige said, because the language is proof that the cars really are Japanese.

This reminded me of a conversation with one of Wijayaweera's colleague. "What does this say?" the man asked, pointing to a warning sign, written in Japanese, located in front of the driver's seat. "It says the battery's cooling system has a problem," I told him, recommending he have the car checked as soon as possible.

At Wasana Trading, I found a Toyota Aqua hybrid, also known as the Prius C, in stock. On one of its seats was a document showing the vehicle was registered as a new car in the northern Japanese city of Kanazawa in December 2014. With an accumulated mileage of 975km, the car was priced at 5 million rupees, nearly 70% higher than a new Aqua in Japan. The popularity of Japanese cars in Sri Lanka is reflected in Japan's trade data. According to statistics released by the Ministry of Finance on Jan. 28, Sri Lanka became the No. 1 destination by value for used passenger cars exported from Japan last year, up from third place in 2014.

The export value to Sri Lanka jumped 54% from the previous year, to 89.8 billion yen ($755 million). This dwarfed the 54.6 billion yen value for second-place destination Malaysia and was close to an all-time high of 95.7 billion yen set by exports to Russia in 2013, which had topped the rankings for five straight years through 2014.

By volume, however, Sri Lanka was just the sixth-largest export market for used Japanese cars last year, taking in 51,561 units. The difference in the country's value and volume rankings underscores just how expensive imported used vehicles there are, averaging 1.74 million yen, far higher than the 520,000 yen or so in Russia.

Why are such expensive vehicles going to Sri Lanka?

One reason is that the country restricts used auto imports to "new used cars," those that are three years old or less. In addition, the government is keen to get more eco-friendly cars on the road. To that end, it sets excise duties on conventional vehicles up to two times higher than those on electric and hybrid ones. A large number of almost-new Prius and Leaf vehicles are parked at the port of Hambantota, in southern Sri Lanka.

Driving four hours from Colombo toward the southern tip of Sri Lanka, I next visited the port of Hambantota, where used cars are unloaded from carriers. Massive numbers of Japanese eco-friendly cars filled the port's sprawling parking area.

SBT, a Yokohama-based used-car trader, opened a subsidiary in Colombo two years ago. The unit now handles some 15% of Sri Lanka's Japanese secondhand car imports and supplies them to local dealers.

Yuki Notake, general manager of the subsidiary, said Sri Lanka is different from other countries in which SBT operates. In contrast, "vehicles shipped to Sri Lanka are mostly 'new used cars' with mileages less than 1,000km," he said. "Nearly 90% of them are hybrid and electric cars."

This raises a question: Why is there such a large, steady supply of new used cars? Do Japanese drivers change cars so frequently?

The answer lies in the structural problems facing Japan's auto industry. The population is dwindling, fewer young people are getting behind the wheel, and the consumption tax was recently raised from 5% to 8%, with another hike on the horizon. Domestic new-car sales peaked at some 7.8 million units in 1990 and have since declined by one-third, logging around 5.05 million in 2015.

With demand sluggish and the market shrinking, carmakers such as Toyota and Honda are finding themselves locked in an ever-fiercer competition for buyers. As a result, more and more shinko-sha, the Japanese word for new used cars, are generated every day.

Auto dealers who cannot clear sales quotas set by manufacturers have long made it a custom to register unsold cars as new vehicles with the transport authorities, treating them as purchased by the dealers themselves. Cars registered in such a manner are counted as part of their sales and contribute to data on automakers' market shares.

But dealers cannot keep such unsold cars in stock indefinitely. They sell them through auctions for used cars and recover part of the money they spent to procure them. Used-car traders who buy the shinko-sha then export them to Sri Lanka.

"The bulk of new used cars so prevalent (in Sri Lanka) were previously owned by dealers in Japan," Notake of SBT said, a testament to how widespread the practice is.

As a result, hybrids like the Toyota Prius and Aqua, the Honda Fit and Vezel (also known as the HR-V) and Suzuki's Wagon-R have been flooding Sri Lanka's shores.

Though they are separated by 7,000km, a mutually beneficial relationship has sprung up between Japan's new-car market and Sri Lanka's used-car market: When Sri Lanka's demand for used cars grows, there are greater incentives for Japanese consumers to buy new cars. This is because when used-car prices rise, so do trade-in prices.

Even for Japanese automakers selling new cars via official agents in Sri Lanka, the used-car boom is not necessarily a bad thing. Rising consumer trust in a brand's used vehicles helps burnish the reputation of its new cars, too.

But this symbiotic setup took a hit late last year when Sri Lanka's Ministry of Finance suddenly raised excise taxes. While the tax was raised by 10 to 20 percentage points for most goods, it soared from 5% to 50% for electric cars, sending a shock wave through the auto industries in Japan and Sri Lanka.

The ministry's move is aimed at boosting the country's meager tax revenue. Sri Lanka's ratio of general government revenues to GDP is around 12%, lower than all South Asian nations except Bangladesh, according to the International Monetary Fund.

It is unclear if levying higher taxes on automobiles will actually increase revenues, and Jafferjee even warned of the opposite, saying revenues could decrease if demand for used cars weakens. The used-car sector had already taken a hit from an earlier government policy aimed at promoting new-car imports from India as part of efforts to improve relations with Sri Lanka's giant neighbor.

Japan's used passenger car exports fell to around 3,000 units in both November and December. An insider in used-car auctions said hammer prices of the Prius in December averaged a little more than 1 million yen, down some 10% from September.

Weaker demand in Sri Lanka is seen as negatively affecting Japan's used-car industry, and the outlook for the sector remains unclear.

With the market in Sri Lanka slowing, some in the business are looking for new ways to benefit from the used-car trade with Japan. Mohan D. Meehitiya, managing director at Clarion Logistics, is among them. The Colombo-based logistics company is planning to build spacious warehouses, showrooms and workshop at the port of Hambantota in order to attract buyers from wider regions, such as South Asia, the Middle East and Africa, and deliver cars from Sri Lanka.

"Sri Lanka has an advantage in terms of geographical location and so can become an international hub for distributing Japanese used cars," Meehitiya said. "I want to find business partners."