Will Indonesian diamonds shine on the global market? BANJARMASIN, Indonesia -- Cempaka Diamond Mine in southern Kalimantan, the Indonesian portion of the island of Borneo, is seen by some experts as one of the richest diamond fields in the world. A 166-carat stone and a rare blue diamond were discovered there in the past.

But with the halt of large-scale mining halted due to environmental and other problems, local people now engage in traditional methods of diamond hunting. 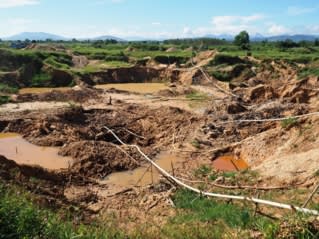 Panoramic view of Cempaka Diamond Mine (Photo by Jun Suzuki)

Recently, however, a local entrepreneur has begun an effort revive industrial mining in the area. Although the hurdles to resuming full-scale operations appear high, expectations are growing that once begun, such work will contribute to the local economy. The hopes are that Indonesia will shine in the global jewelry industry.

Cempaka, a small village roughly 45km from Banjarmasin, the capital of the province of South Kalimantan, is pocked with large man-made holes. At the bottom of one, local men sift earth and sand in basins in a small pond.

The men are panning for diamonds. By rotating the basins quickly, they can separate the precious stones from sand an pebbles due to the difference in the diamonds' specific gravity. The miners sometimes find gold and other gemstones, in addition to diamonds, villagers said.

A man named Ijar, 40, who was born in the village, has been prospecting for diamonds in this way since he was a child. "In this area, many groups of people are seeking diamonds like this," he said. 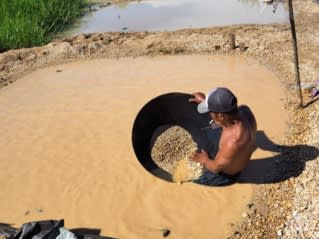 In May, a local newspaper carried a long story about Ahmad Dahlan, a 49-year-old villager, who discovered a 39-carat diamond. Hundreds of men are doing the same work, hoping to hit the jackpot.

A joint venture between Indonesian nonferrous metal producer Aneka Tambang (Persero) and a Singaporean company has the right to mine diamonds in Cempaka, while most of land in the village is owned by the provincial government of South Kalimantan. The residents are thus hunting for diamonds without permission.

The traditional methods used by local residents are illegal, according to the Ministry of Energy and Natural Resources, which is responsible for managing Indonesia's subterranean resources.

But the government's message is a mixed one: The Tourism Ministry's "Wonderful Indonesia" website shows miners panning for diamonds in the old-fashioned way. Local residents rarely think of what they are doing as illegal. And with the joint venture's mining halted in 2009, they have little incentive to stop.

A leading global diamond producer, Gem Diamonds, which owned 80% the Cempaka Diamond Mine's rights at the time, said it decided to discontinue the work "due to the impact of the declining price of Cempaka's rough diamonds following the global financial crisis. And in line with the company's strategy to focus on cash-flow generation, the Cempaka mine will be placed on care and maintenance."

But local people attributed the halt to environmental contamination. The mine has not resumed operations since.

That may soon change, with the appearance on the scene of an influential local entrepreneur this spring. According to a local newspaper, Banjarmasin Post, H. Norhin, who runs a shopping mall and other facilities in the area, demanded in April that the resources ministry grant mining rights to him. The ministry has acknowledged receiving a request from a local entrepreneur.

Rich in mineral resources, Indonesia is a major producer of coal, copper, nickel and other sought-after commodities.

Singapore to roll out diamond-trading platform in September

Indonesia is a bit-player in diamonds, but production at the Cempaka mine started when the country was still under Dutch rule. In 1965, a huge 166-carat diamond, called Trisakti, was discovered in Cempaka, triggering a mining boom.

The Indonesian government granted extraction rights in Cempaka to foreign businesses in the 1990s, arousing hopes that Indonesian diamonds would appear on the global market. But Gem Diamonds' decision to shut down has prevented that.

Nevertheless, many local people believe high-quality diamonds lie underground in Cempaka and should not be wasted. Diamonds discovered by local residents are mostly processed in nearby cities and sold domestically. They thus are shut off from the global market.

But if full-scale mining resumes, the diamonds are expected to attract customers not only in major markets such as the U.S., China and India, but also in Indonesia, which is seeing continued economic growth.

A bumpy road lies ahead. The resources ministry is taking a cautious line on Norhin's request, pointing out that the mining rights granted to the joint venture remain valid for another 15 years or so. There also is the question of what the ministry should do if environmental damage was the reason for the decision to discontinue its operations.

Such concerns aside, a restart of diamond mining would be a boon to the local economy and employment at a time when Kalimantan and Indonesia as a whole have been hit hard by lower prices for coal and other natural resources.

Sales of diamonds in 2016 leveled off at around $80 billion, according to De Beers, a leader in the diamond business.

"Bridal diamond jewelry continues to be foundation of the industry, but products popular with millennials and buying by women are helping to spur growth," De Beers said.