Indonesia's annual alcohol consumption per capita is only around 0.01 liter. However, in Bali, one of the world's most famous vacation spots, a winery founded by a mother-daughter duo is drawing attention.

Sababay Winery was started by President Director Mulyati Gozali and her daughter and CEO, Evy Gozali, in 2010. Sababay produces and sells 400,000 bottles of wine a year, including crisp sparkling muscat wines and sweet red wines such as ports. A growing number of restaurants in Jakarta, as well as in Bali, serve Sababay wines.

Sababay's products are characterized by Balinese grapes. Previously, farmers could only get 400 rupiah (3 cents) per kilogram for the grapes they grew. Sababay now pays 5,000 rupiah per kilogram in an effort to support grape farmers in northern Bali. 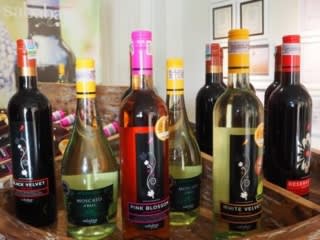 The company's "proud to be a grape farmer" campaign helped stabilize farmers' incomes and enabled their children to go to school. Also, the number of farmers that work with Sababay rose from 75 to 180. These farmers now grow grapes on 120 hectares of land. In the future, they hope to shift to organic farming and use less pesticides.

Evy Gozali said she wants to develop Bali into a major wine-producing region, like Napa Valley in the U.S. state of California. The winery aims to boost domestic consumption by pitching wines that go well with Indonesian cuisine to renowned restaurants. It aims to start exports to Japan by around 2020.

Around 95% of wine consumed in Indonesia is imported. Due to high taxes on imports of alcoholic beverages, only a few wealthy people have the luxury of drinking wine. The spread of high-quality domestic wines could boost consumption.

"We cannot compete with Chilean wine in terms of price, but we will sell our wines with the Bali story," Evy Gozali said.

After India became independent in 1947, its alcohol market was difficult to grow because consumption was prohibited in some states. However, wine production has begun spreading gradually since the 1980s.

Indians are beginning to drink more wine, too. As consumption among the wealthy has diversified, domestic demand for wine grew to 22 million liters last year from 1 million liters in 2001.

Domestic producers are gaining in popularity, although imports still account for 20% of India's wine consumption. Sula Vineyards in the western state of Maharashtra, the country's major grape-growing region, is the largest domestic wine producer. It controls nearly 50% of the market with its products, ranging from bottles that sell for 500 rupees ($7.37) to high-end wines.

Grover Zampa Vineyards, India's second-largest winery, in the southern state of Karnataka, has won 57 awards at home and abroad over the past two years with its focus on high-end brands.

Only 2% of Indian vineyards produce grapes for wine. Large companies are busy supporting grape farmers and tapping new markets, betting that demand will expand at an annualized pace of 15-20%.

Moldova and Georgia, major wine producers in the former Soviet Union, are boosting exports. Previously, former republics of the Soviet Union, including Russia, accounted for 90% of Moldova's wine exports, but now 40% are shipped to Europe. The country has increased exports to Poland, the Czech Republic and Romania, taking advantage of an agreement with the European Union. For some brands, such as Purcari, European exports account for more than 60% of sales.

Georgia is making efforts to tap eastern markets. According to the country's National Wine Agency, wine exports to China in the January-June period jumped 140% from a year earlier, making China its third-largest market after Russia and Ukraine. The country is beefing up investment to promote sales, with plans to open 100 wine shops across China.

For both Moldova and Georgia, an import ban imposed by Russia, their largest wine importer at the time, prompted the two countries to diversify export destinations. In 2006, the Russian government banned wine imports from the two countries, which had become increasingly pro-Western. The restriction dealt a heavy blow to both countries at first, but eventually helped improve wine quality and boost new investment.

In September, the United Nations World Tourism Organization held its first global conference on wine tourism. "Wine tourism can contribute to fostering sustainable tourism by promoting both the tangible and intangible heritage of the destination," the organization said.