BANGKOK -- Mobile carriers in Thailand are battling to become the dominant provider of 4G wireless services that are quickly becoming popular in the Southeast Asian country.

Three major telecoms are locked in the fight for shares, with Advanced Info Service leading the pack by winning nearly 10 million subscribers to its fourth-generation technology in less than a year. True Corp., the third largest player, is closing in on number two Total Access Communication.

The need for speed

A series of auctions for the 4G spectrum was held between the end of 2015 and May 2016. True Corp., which began providing 4G services in 2013, and AIS, which had been unable to join the 4G race due to a spectrum shortage, won new 4G licenses in the auctions. This effectively launched all-out competition in the 4G space. True Corp. has gained ground fast, increasing the number of 4G subscribers by 22% in one year to 22.6 million at the end of September 2016. The gap with Total Access Communication, known as a member of Norway's Telenor group, narrowed by two-thirds during the one-year period to 2.2 million.

True Corp.'s revenue from overall cellular services in the July-September quarter of 2016 surged 32% from a year earlier to 14.8 billion baht ($414 million). Meanwhile, Total Access Communication's revenue from telecom services during the same quarter dipped 1% on the year to 16.1 billion baht.

Earlier in 2016, True Corp. started accepting applications at CP-affiliated convenience stores for switching to its service under the mobile number portability system. The move is part of True Corp's strategy to siphon customers from rivals.

Meanwhile, AIS is solidifying its top position. A senior marketing executive at AIS recently told the Bangkok Post that 4G accounts for 25% of the company's total subscriptions, which stood at 39.87 million at the end of September last year.

AIS' revenue from data communications services in the July-September quarter spiked 18% from a year earlier to 16.2 billion baht, which is nearly twice as large as those of Total Access Communication and True Corp. However, AIS' market share has declined as it lost customers to True Corp.

As in other emerging countries, the telecom industry in Thailand is going through a massive shift in revenue sources from voice to data.

AIS CEO Somchai Lertsutiwong has said the way people communicate has switched from traditional voice communication to exchanges via messages on mobile devices.

These 5G licenses will be highly coveted by carriers. 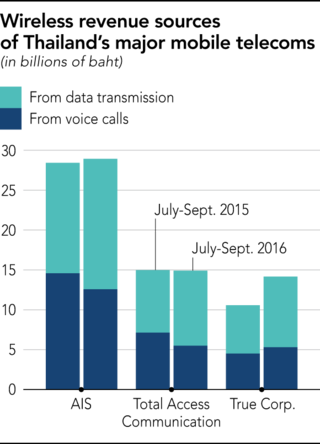 According to local media reports, NBTC will auction 80 megahertz in the 2.6 gigahertz band, which is owned by MCOT, the state-run public broadcaster. Some 80MHz of bandwidth is not being used by the broadcaster, which is demanding compensation for returning the unused spectrum.

The spectrum auctions for 4G licenses that began in November 2015 brought a total of 233 billion baht in unexpected extra income to the Thai government.

The government foresees more income from the 5G auctions, while mobile service providers are bracing for massive new expenditures to win the licenses.