TOKYO Wireless carriers are preparing to leap to fifth-generation network technology, providing a speed boost that could change everything from the way we watch sports to how we undergo surgery.

The new technology will enable communications speeds up to 100 times faster than current 4G technology. Global 5G standards could be finalized by the end of this year, and the development of compatible devices is expected to take about a year.

Japan's big three carriers -- NTT Docomo, KDDI and SoftBank Group -- aim to have 5G connectivity available in parts of Tokyo and other limited areas in time for the 2020 Olympics. They are expected to shell out a combined 5 trillion yen ($45.1 billion) to set up the networks.

"We will offer 5G in key regions across Japan in the first three years," Docomo CEO Kazuhiro Yoshizawa said, declaring the company's intention to offer nationwide coverage by the fiscal year that starts in April 2023.

Carriers in other countries are making similar moves. U.S. giant Verizon Communications aims to roll out its 5G network early next year. China Mobile plans to boost investment in the 2019-2020 period, looking to commercialize the new network in 2020. South Korea's KT is set to offer 5G-capable technology on a trial basis next year. The potential is huge. Switching on the mobile afterburners will allow self-driving cars to communicate with each other in just 0.001 second, significantly reducing the chances of accidents

. The virtually instantaneous transmissions could also allow doctors to operate on patients remotely. In the industrial sector, better internet-of-things connectivity promises to improve productivity in factories and other settings.

Media organizations cannot wait to get hooked up. Some are working on technology that will enable viewers to watch live sports from a desired angle by switching between video feeds from multiple cameras. Mobile streaming of ultrahigh-resolution 8K video is also on the way.

FEAST FOR THE EYES The 8K shift is generating a lot of excitement.

NTT Docomo on May 22 held a 5G demonstration at Tokyo Skytree, the world's tallest self-supporting tower. A screen placed on the ground floor showed a live image relayed wirelessly from an 8K-resolution camera on the observation deck 350 meters above -- a world first.

"We will lead the world with our 5G technology," Yoshizawa vowed later that day.

How does 8K compare with current standards? The resolution is 16 times greater than the high-definition format known as full HD. Motion and color are captured with such sharpness and accuracy that it can be difficult to distinguish the images from the real thing.

Today's 4G mobile networks cannot handle 8K video because of its high bandwidth requirements. But 5G will make it feasible.

KDDI has also successfully demonstrated 5G's ability to transmit the souped-up video. It pulled off the feat of sending 8K footage from a moving car to a display in another location. This defied experts who had said it would be difficult to capture and transmit 8K on the go with 5G technology.

FIRST THINGS FIRST Before we can all binge on 8K video, spectrum allocations need to be worked out.

Broadcasters and telecom companies are allocated bands of radio spectrum for their services. Frequencies up to the gigahertz range allow stable radio transmissions, and operators raced to acquire the appropriate bandwidth a long time ago. Japanese operators of Long-Term Evolution, the fastest type of 4G network, are typically given spectrum bands up to 3.5 GHz.

5G is expected to make use of frequencies up to 100 GHz.

Docomo and other gl

obal mobile carriers are pushing for the 28 GHz band to be set aside for 5G. At 28 GHz, radio waves oscillate 28 billion times per second, offering 20 to 50 times the data-carrying capacity of the bands currently in use.

The 3rd Generation Partnership Project is an international body that develops telecom standards. In September 2015, it began working on 5G standards with global industry players. In March, more than 40 companies involved in the telecom business, including AT&T, a big U.S. carrier, and chipmaker Qualcomm, also of the U.S., agreed to move the target date for establishing the standards forward to the end of this year, six months earlier than initially planned. 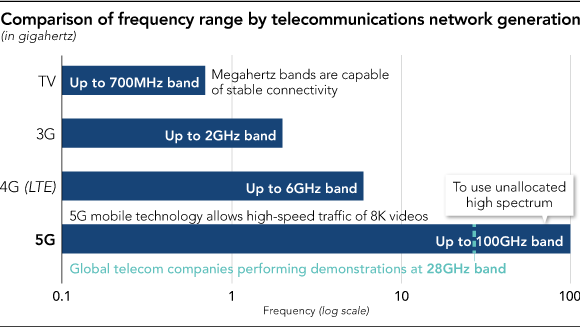 But these global players are concerned about Verizon's plan to start offering 5G in early 2018. The largest U.S. telecom

company wants to get the jump on its rivals. But to get that first-mover advantage, it will probably build base stations using its own technology before common industry standards are finalized.

This raises the specter of a fragmented market.

Japan might face a similar headache. SoftBank aims to start offering 5G sometime in 2019, ahead of Docomo and KDDI, both of which are shooting for 2020.

"We will be tested in our actual capabilities for the 5G system after the standards are established," a KDDI executive said.

The transition from one generation of technology to the next typically requires telecom operators to spend a lot of money. Strategic mistakes can put the entire business at risk. 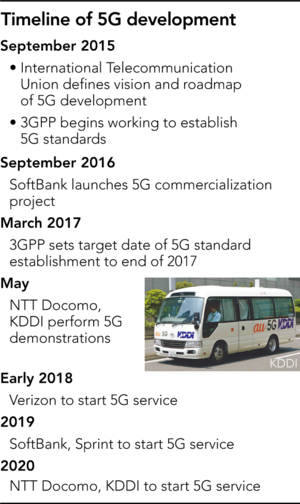 Docomo, KDDI and SoftBank spent over 6 trillion yen installing the current 4G LTE network. The next generation of wireless is expected to cost less because the carriers could simply convert some of the 4G stations they operate across Japan. Still, the new equipment will not come cheap.

Despite SoftBank's eagerness to jump out in front, the three Japanese carriers are seeking common ground to hold those costs in check. Docomo parent Nippon Telegraph & Telephone has proposed sharing 5G stations with its two rivals. Both are expected to agree, particularly when it comes to stations in urban areas.

While the three Japanese providers are performing well, they face slowing growth in the numbers of smartphone users and overall subscribers. Budget smartphone carriers are also putting up more of a fight. With these factors threatening their medium- to long-term prospects, the big players are wary of overspending.

Providers in Japan and elsewhere will soon face some make-or-break decisions: where to roll out 5G services first, how much to charge and so on.