TOKYO -- Global telecom companies are accelerating their efforts to roll out the fifth-generation wireless network technology within several years. The ultra-speedy mobile networks will create new possibilities for mobile devices, such as streaming ultrahigh-resolution 8K video.

NTT Docomo of Japan on May 22 held a 5G demonstration at Tokyo Skytree, together with the tower's operator, Tobu Railway. "We will lead the world with our 5G technology," vowed Kazuhiro Yoshizawa, president of the mobile communications carrier, later that day.

During the demonstration, a screen placed on the ground floor of the tower showed a live image relayed wirelessly from an 8K-resolution camera on the tower's observation deck 350 meters above, a world first.

This 8K video has a resolution 16 times higher than the high-definition format known as full high vision. They capture motion and color with such sharpness and accuracy that the images are difficult to distinguish from live viewing.

KDDI, another big Japanese mobile carrier, has also successfully demonstrated 5G technology, transmitting video taken by an 8K camera from a moving car to an 8K display in another location. 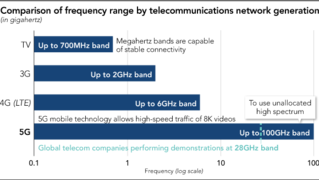 Before that test, many experts believed it would be hard to capture and transmit 8K images from a moving vehicle using 5G. The success of the demonstration, and that of Docomo, is a big step toward commercializing next-generation technologies for smartphones and other mobile devices.

Broadcasters and telecommunication companies are allocated bands of radio spectrum for their services. Frequencies up to the gigahertz range allow stable radio transmissions, and operators raced to acquire the appropriate bandwidth a long time ago. Japanese operators of Long-Term Evolution, the fastest type of 4G network, are typically given spectrum bands up to 3.5GHz. 5G is expected to make use of frequencies up to 100 GHz, opening up new spectrum for broadcasters and telecom companies.

Docomo and other global mobile carriers are pushing for the 28-GHz band to be set aside for 5G. At 28-GHz, radio waves oscillate 28 billion times per second, offering 20 to 50 times the data-carrying capacity of the bands currently in use.

The 3rd Generation Partnership Project is an international body that develops telecommunications standards. In September 2015, it began working on 5G standards with global industry players. In March, more than 40 companies involved in the telecom business, including AT&T, a big U.S. carrier, and chipmaker Qualcomm, also of the U.S., agreed to move the target date for establishing the standards forward to the end of this year, six months earlier than initially planned.

But these global players are concerned about the response of Verizon Communications. The largest U.S. telecom company has said it would start offering 5G service in early 2018, as it tries to get a jump on its rivals. It will probably build base stations based on its own technology before common industry standards are finalized, raising the specter of a fragmented market.]

Japan could face similar headaches. SoftBank Group aims to start offering 5G sometime in 2019, ahead of Docomo and KDDI, both of which hope to launch the service in 2020.

"We will be tested in our actual capabilities for the 5G system after the standards are established," said a KDDI executive. The transition from one generation of technology to the next typically requires telecom operators to spend a lot of money. Strategic mistakes can put the entire business at risk. With 5G, in particular, operators will have to invest heavily in new equipment.

Providers will have to make careful decisions -- where to roll out 5G service first, and how much to charge customers. The ones that succeed will be those that can minimize the risk of these big investments while offering the best possible customer service.