YANGON -- While Southeast Asia's regional bloc gets ready to further integrate the economies of its member nations in 2015, one of the countries is also looking forward to setting up some big pieces of financial sector infrastructure. The head office of the Central Bank of Myanmar is in Naypyitaw.

The Central Bank of Myanmar next year will throw the switch on a computer network modeled on the Bank of Japan's payment settlement system. Also in 2015, the Yangon Stock Exchange will open, and securities houses will follow with new online transaction systems.

For years now, Japanese companies have been playing key roles in these projects.

NTT Data in February sealed a deal to provide software for Myanmar's central bank network. In May, Daiwa Institute of Research, Fujitsu and KDDI won a contract to develop the network's infrastructure. "This is the first time that Japanese companies have ever worked on information systems for any Southeast Asian country's financial sector," said Yoshiaki Ito, head of Daiwa Research Institute's cloud service division. The institute, part of the Daiwa Securities Group, is also expected to play a big role in developing transaction systems for the Yangon Stock Exchange.

Since Myanmar's junta made way for a civilian government in 2011, foreign companies have been vying to invest in the country, widely regarded as Asia's final business frontier. Corporate demand for capital is expected to explode in the country.

Myanmar, however, cannot yet meet the online needs of these companies. At the central bank, the bulk of the work to process transactions between it and its branch offices as well as between it and commercial banks is done manually. This limits the number of trades handled each day to 500. "There are only 14 employees in charge of computer system matters out of a total of 1,500 bank workers," said Koji Oshikiri, an expert with the Japan International Cooperation Agency.

It is not for nothing that the Myanmar government and the central bank enlisted Japanese tech companies to build new systems. Grants that Japan handed Myanmar require the aid recipient to hire Japanese contractors.

In March 2012, JICA, a governmental body, had Daiwa Institute of Research, NTT Data and Fujitsu find out how much information and communications technology Myanmar's central bank and commercial banks use.

Seven months later, the three contractors submitted their findings; the Japanese government then decided to prioritize computerization and online infrastructure for the central bank as key parts of its official development assistance to Myanmar.

But by its own laws, Japan could not immediately offer funding in the absence of an explicit request from Myanmar.

And there were other countries making offers.

To win Myanmar's trust, the Japanese government allied with businesses and universities to propose assistance on various levels. In November 2012, Japanese university professors were sent to Myanmar to educate senior officials of the country's central bank. At the same time, Japanese experts suggested Myanmar make its central bank, which was part of the finance ministry, independent.

Myanmar initially considered using general purpose software for fund settlements but later concluded that a proprietary system which could be continually updated was necessary, according to H. E. Set Aung, deputy governor of Myanmar's central bank. H. E. Set Aung added that it then seemed to be a good idea to model Myanmar's system on the BOJ's dedicated system.

Once the financial sector's online infrastructure is up and running, further business opportunities can be expected to come at a quick pace, according to Asako Toyoda, head of NTT Data's global business planning office. NTT Data wants Myanmar to adopt its data communication system for banks as well as its online credit card payment-processing system.

The Japanese government, meanwhile, is helping Myanmar devise a relevant legal code so the Yangon Stock Exchange can open next year. Japan Exchange Group and Daiwa Institute of Research are also contributing their rule-making expertise. 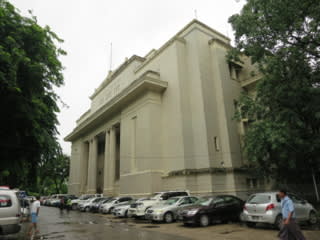 The future home of the Yangon Stock Exchange is seen on a rainy day in Myanmar.

Myanmar needs new legislation to open the stock exchange. Regulations regarding trades and the listing of companies need to be put in place. Japan's participation in the lawmaking process is expected to help secure more trading system deals for Japanese corporations.

Companies that win contracts will be able to trace their success back to 2010. That is when Myanmar began consulting with Daiwa Institute of Research on the opening of a stock exchange; the Japanese company had been operating in the country for 15 years -- during a period when very few foreign companies had a presence in Myanmar.

At around the same time, the Japanese finance ministry's Policy Research Institute launched a project to help emerging Asian economies set up bourses. The institute was on the lookout for aid recipients. In early 2011, the ministry got wind of Myanmar's plan for a stock exchange via the Daiwa research arm and conducted a feasibility study there in May that year -- just after Myanmar's transition to a civilian government began. The ministry carried out the groundwork even before other countries began showing keen interest in Myanmar.

In August 2013, Myanmar put in force an 80-clause securities trade law. The country is now putting the finishing touches on relevant decrees with the assistance of Japan's finance ministry and Financial Services Agency.

JICA is also involved. Shohei Yano, an official of the Japanese Financial Services Agency, has been assigned to work at Myanmar's finance ministry to represent JICA.

As for Japan's private sector, in May 2012 Daiwa Institute of Research, Japan Exchange Group (then Tokyo Stock Exchange Group) and Daiwa Securities Group signed a memorandum of understanding to assist with computer system design for securities businesses, contribute expertise on how to operate a stock exchange and to train personnel.

Daiwa's research arm is said to frequently send employees to commercial banks in Myanmar to discuss how to develop new online systems. 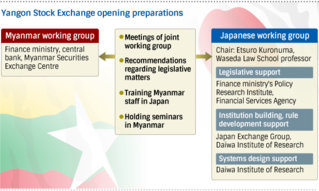 Although Japan's public and private sectors are playing separate roles in helping Myanmar launch a stock exchange, they cooperate through a joint working group formed in August 2012 by the finance ministry's Policy Research Institute. Members meet two to three times a month to share information. They also work together when training Myanmar workers in and outside Japan.

A company to prepare for the launch of the Yangon Stock Exchange is due to be set up this autumn. Kensuke Yazu, chief representative with the Japan Exchange Group is helping to establish the company in Yangon. "We will devote much time to personnel recruitment," he said, "as well as to the making of relevant rules."