The Japanese imaging company's board on Thursday approved a plan to have core unit Fujifilm acquire the research reagents maker from Takeda Pharmaceutical by April 2017 via a 154.7 billion yen ($1.31 billion) tender offer starting in late February. Wako will also repurchase more than 30% of its own shares at the time of the acquisition at a cost of 97 billion yen.

The deal gives Fujifilm "the strongest possible" regenerative medicine lineup, CEO Shigetaka Komori told a news conference here after the meeting. Wako makes a nutrient medium used in cell cultures at relatively low cost, which has helped forge sales ties with a variety of medical institutions. Fujifilm, meanwhile, has developed scaffolding to coax cells, including human cells, into 3-D structures such as organs. Together, these technologies will let Fujifilm supply clients with all of the key materials for regenerative medicine as well as higher-order offerings such as cultured cells.

Fujifilm "will combine our technology with Wako's, drawing on synergies to build our business as large as possible," Komori said.

Fujifilm's foray into regenerative medicine has largely been powered by acquisitions. In 2014, the company turned Japan Tissue Engineering, which produces cultured tissues such as skin, into a subsidiary. Fujifilm purchased Cellular Dynamics International of the U.S. in 2015, taking on operations developing and manufacturing induced pluripotent stem cells, or iPS cells.

Japan Tissue has been granted permission to sell regenerative therapies, including cultured skin to treat severe burns. As facilities capable of transplanting that skin have become more numerous, growing revenue has started to offset research and development costs, positioning the company to move into the black in fiscal 2016. Cellular Dynamics, too, is building its iPS cell supply business into a solid earnings source.

Fujifilm logged 2.49 trillion yen in group sales in the year ended March 2016, 47% of which came from the document solutions segment. But business there faces a plateau amid a drop-off in demand for office printing. Digital cameras and photo printing equipment confront similar stagnation. The company is therefore pinning its hopes on health care, which brought in 423.5 billion yen in fiscal 2015. Sales of 1 trillion yen are targeted as early as fiscal 2018. 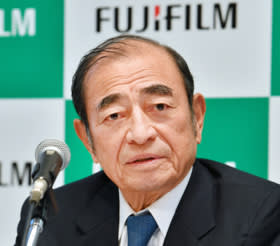 "If we happen on a company we have reason to acquire, I'd like to do so," letting Fujifilm "keep filling out weak spots," Komori said.

Legislation simplifying the permit process for making and selling regenerative medical products took effect in Japan in November 2014, lowering barriers to putting new technologies to commercial use. This has so far led to burn treatments using lab-grown skin, as well novel heart disease therapies. Startups have largely led the way in this field. But large drugmakers are now getting behind their own regenerative medicine efforts, as are nonpharmaceutical companies such as Hitachi unit Hitachi Chemical.

But hazy or nonexistent frameworks for regenerative medicine in various countries make earnings prospects dicey, at least for now. Japan Tissue has had patients die while skin to be used in burn treatment was in production, leaving them out the cost of the culture, for example. Policies regulating insurance coverage for new treatments will also shape fortunes in the field.