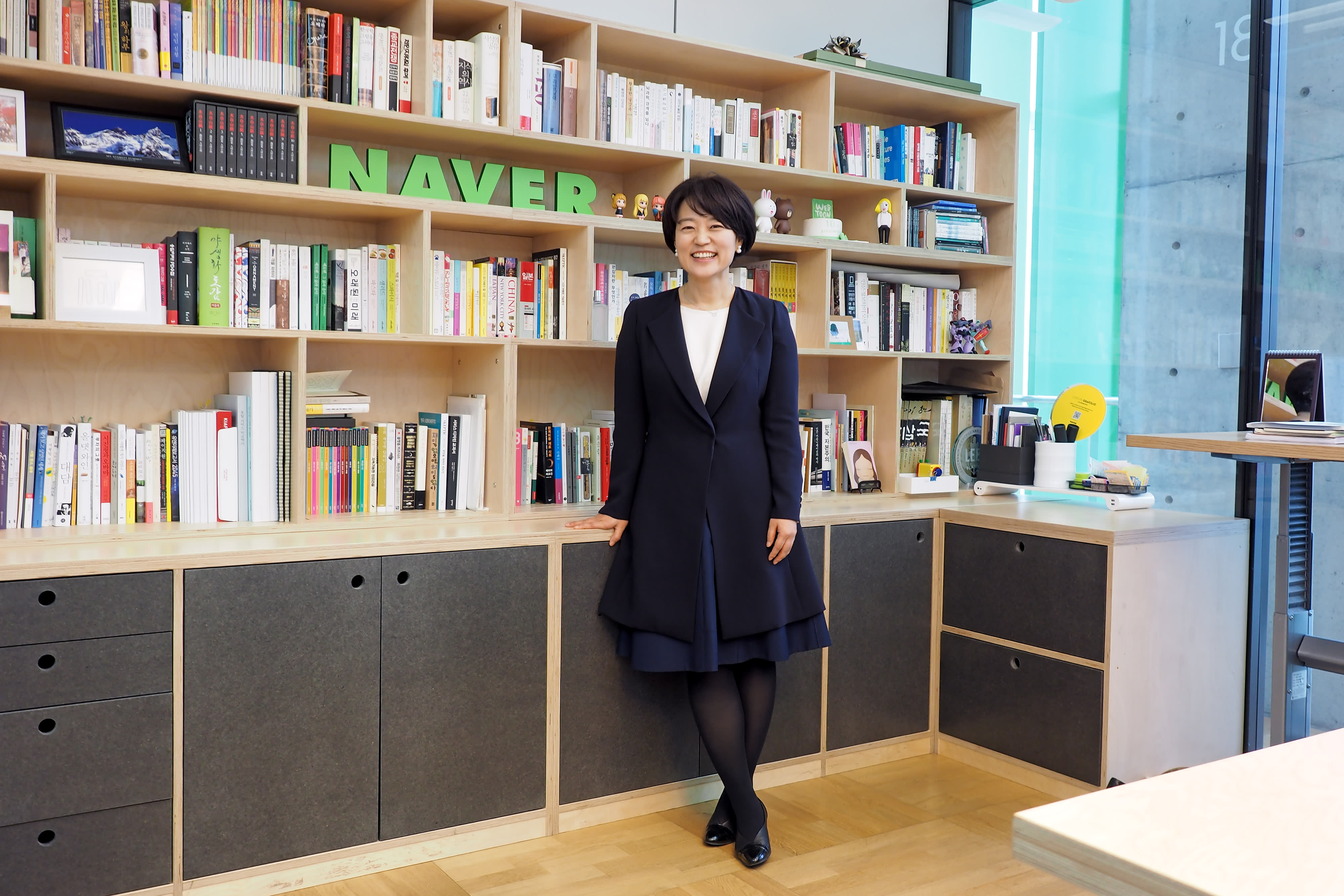 SEOUL -- Han Seong-sook became the first woman to lead a major South Korean technology company on assuming the role of chief executive of Naver on March 17. Now she faces the task of steering the country's largest IT business along pioneering paths of global expansion and the development of advanced technologies. Naver is facing stagnant growth in its home market, which it already dominates. Its flagship Line messenger app has tapped out its key markets in Japan and other Asian nations and Google is eating into its search engine leadership in South Korea. Its share price has barely risen in three years. To reenergize, Naver has declared it will "go global."

In November 2015, Kim Sang-hun, then chief executive, announced that Naver would revive the "hungry spirit" that drove it into Japan 15 years before. Founder Lee Hae-jin set the pace as chairman, vowing to bring Naver level with companies such as Google and Facebook. Lee, who stepped down as chairman last week, remains a director, with a focus on the company's expansion into Europe and North America. Byun Dae-kyu, chairman of set-top box maker Humax Holdings, is the new chairman. Naver was South Korea's leading internet destination for news, message forums and web search when PCs dominated, but its edge has been chipped away. Smaller rival Daum joined forces with popular messaging network Kakao to face the demands of the mobile-first digital era, but Naver has struggled to adapt. Now, Naver and Kakao are diving into "deep-tech" in the race for cutting-edge technology.

Kakao has built a mobile-first empire of games, content and on-demand apps, aiming to use artificial intelligence to create a chatbot that will cater to consumers' whims and fancies. Starting with helping business clients, the chatbot will handle everything from customer service and making reservations to shopping and order delivery.

Naver will invest 500 billion won over the next five years in artificial intelligence-based deep tech areas such as automated driving, voice recognition and mapping robotics. But industry experts say Naver's local prowess, even in advanced technology, will not give it the edge it needs to compete abroad.

"Naver has a clear idea about how to satisfy the unique Korean customers' demand. But I'm not sure Naver can repeat their business model in different countries," said Jay Rhee, an international business professor specializing in internet companies at Korea University in Seoul.

Naver's successes abroad are an anomaly among its South Korean peers. It is riding on the coattails of Line, a chat app with 1 billion users and which had its own 115.5 billion yen ($1.03 billion) initial public offering last year, and Snow, a Snapchat-like selfie app that has raked in 100 million downloads since its 2015 debut. Line's camera app B612 has collected 300 million downloads too. These apps swept Asian markets before Snapchat and Instagram turned toward the region.

Naver joined Samsung Electronics and Nvidia in investing in Silicon Valley startup Sound Hound in February, and Naver is planning to debut its voice technology solution in April. Naver's Google Translate rival app Papago has gained 2 million users since its launch last August. It will be incorporated into the company's upcoming Whale web browser, which also features split-screen display, quick screenshots and a sidebar search box.

In February, Naver became the first company in South Korea to receive an automated driving permit and it is piloting artificial intelligence image- and style-recognition software for online shopping. Naver and Line unveiled their cloud-based virtual assistant Clova at this year's Mobile World Congress tradeshow in February while announcing the upcoming launch of Wave, a smart speaker, in South Korea and Japan. Naver i, launched in pilot form in early March, is an interactive search engine for restaurants, movie recommendations and news.

Soon after Naver Labs incorporation in January as a subsidiary, rival Kakao, which has struggled to claw its way out of the local market, announced an AI initiative of its own, digging deeper into local services. Chairman Kim Beom-soo leads the new Kakao Brain, which will focus on developing AI projects for e-commerce such as a customer service chatbot.

But if globalizing a consumer app is hard, deep technology is harder. Constrained by location and language, AI is only as good as its underlying database. While Naver holds the most South Korean data, Korean-language AI and mapping capabilities could be hard to apply to global apps, analysts say.

"Language is critical, but more than the language issue will be how they are going to communicate with local people who have a different cultural background," said Korea University's Rhee. "Naver should develop some core concepts that can be applied to almost every country while specializing in different business models, but I'm not sure whether Naver has that kind of potential to serve unique demands."

Eugene Kim, who worked at Naver in the mid-2000s in a unit that offered free games for foreign markets, suggested that whatever solutions Naver develops will be radically different from its current playbook. The best chance to expand will be through mergers and acquisitions, he said.

"If all your information is just Korean, I don't know if that's necessarily going to be an advantage," said Kim, who now runs tech accelerator SparkLabs in Seoul. "If [Naver] wants to use artificial intelligence in other countries ... then they are going to have to acquire the data somehow."

Thomas Kwon, an analyst at Daiwa Securities, said the language barrier may be less of a problem for big data. "Big data solutions can be applied to tech for image and videos going forward," he said. "[Naver is] interested in that kind of solution."

"I don't think Naver could be a global player," he added. He forecasts that its share of revenue from overseas will continue to hover around 35% in the near term. But in a report on March 21 affirming his "buy" rating, he concluded, "Strategically, we believe both Naver and Line are rapidly transforming themselves into a technology-leveraged company, by optimizing their existing core services with new technology -- artificial intelligence, robotics, and big data analytics -- to capture opportunities from multi-platforms, advanced user interfaces, and new content consumption."

Lee Hae-jin has set a clear vision. Perhaps he has not figured out how to get there, but the founder's message to management is to spend more time trying to find opportunities rather than laying out a specific plan. It may be enough just to set the right tone for employees, investors and the public, observers say.

"Strategy begins with mission and ... it is really critical for their employees to see where they are going," said Rhee. "Even though [Naver] may fail in the future ... at least they are moving forward, and they are going to give up this cozy environment because they know staying in this country would be a shortcut to failure."