TOKYO -- Companies looking to rent office space in Myanmar should expect to pay far more than they would elsewhere in Southeast Asia, a new survey shows. 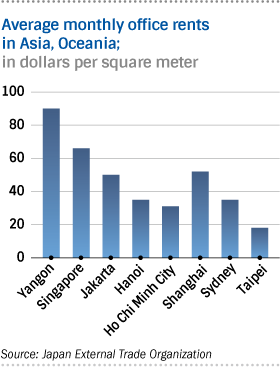 The Japan External Trade Organization, the nation's trade promotion body, spent two months conducting research on business conditions in major cities across Asia and Oceania -- from December through January. It found that office space in Myanmar's commercial center and former capital rents for an average of $90 per square meter. The figure was down 5% on the year but was still four times the average more than two years earlier.

Yangon was 36% more expensive than Singapore, about twice as costly as Jakarta and three times pricier than Ho Chi Minh City.

International companies are landing in Myanmar, hoping to tap into the country's growth potential. But a shortage of offices is becoming a serious issue. The nation also lacks enough hotels to accommodate visitors, sending room rates upward.

While low labor costs are part of Myanmar's appeal, high office rents could erode that advantage.