The giant Antamina copper-zinc mine in Peru sits at an altitude of 4,300 meters. It is owned by a consortium of Glencore, BHP (each with 33.75%), Teck Resources (22.5%) and Mitsubishi Corp. (10%). Photo courtesy Teck Resources
GEOFF HISCOCK, Contributing writerAugust 2, 2017 18:31 JST | Australia, New Zealand, Pacific Islands
CopyCopied

SYDNEY -- Mining companies across the world are rushing to bring zinc mines into production ahead of an expected increase in demand from new applications in sectors such as construction, automotive, energy storage and food production.

In particular, China and India are seen to  be huge consumers of the metal for use in fertilizers to replenish depleted soil, amid pressure for higher crop yields to feed their 2.6 billion people. China is already the dominant zinc producer and consumer, accounting for more than half of global output and demand.

China's ambitious Belt and Road initiative alone has the potential to substantially lift world steel demand -- and by extension, zinc demand through its use in galvanizing -- over the next decade if the project's many planned ports, roads and railway lines are built. The Red Dog zinc mine in northwest Alaska is one of the biggest in the world. Photo courtesy Teck Resources

Zinc prices jumped 60% in 2016 to a 10-year high of just under $3,000 a metric ton on fears of a supply shortage after the world's biggest zinc miner, Swiss-based Glencore, said late 2015 it would cut global output by 500,000 metric tons and China-backed MMG closed its massive Century mine in northern Australia in February 2016.

Prices fell back to about $2,400 a metric ton by June this year but have since risen and stabilized at around $2,800. Jonathan Leng, principal zinc analyst with U.K.-based energy and metals research consultancy Wood Mackenzie, said he expected refined zinc stocks to be at "minimum levels" by the end of this year. "Even with the forecast balanced market in 2018, supply will be tight and prices high," he said.

The U.N.-backed International Lead and Zinc Study Group said in July that demand for refined zinc in the first five months of 2017 was up about 1.1% on the previous year, with increased U.S. appetite offsetting a fall in China. It said there was a supply deficit of about 178,000 metric tons in this period.

By far the biggest use of zinc is in the galvanizing of iron and steel to protect against rust, accounting for about half of all consumption. Carmakers, shipbuilders and construction companies are big end-users. Leng said the most significant driver of zinc's future consumption growth was likely to be the demand for galvanized steel sheets in the automotive sectors in developing economies.

Other applications for zinc are in alloys, chemicals and pharmaceuticals, with future potential seen in the fertilizer and battery markets.

One newcomer to the industry is Sydney-listed startup Redflow, which sells a residential and commercial energy storage battery that uses a patented zinc-bromine flow technology. A spokesman for Redflow said that about 10kg of zinc goes into one of its 10 kilowatt-hour batteries. With anticipated output this year of about 3,000 units, its annual zinc consumption of 30 metric tons is relatively small. 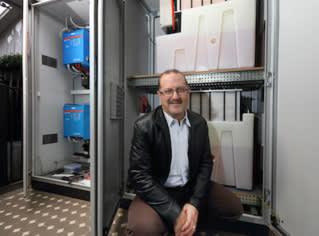 Still, the company hopes to disrupt the $50 billion global market for traditional lead-acid batteries in stationary energy storage. In particular, it is aiming to supply power to some of the 2.7 million telecommunications towers in off-grid or "weak grid" locations in the Asia-Pacific region. China alone has 1.75 million such towers, with another 450,000 in India, 220,000 in Japan and 86,000 in Indonesia.

Redflow is moving production of its ZBM2 battery from Mexico to Malaysia by the end of this year, and its bullish outlook reflects the new opportunities for zinc producers.

Another contender in the energy storage area is California-based EnZinc, which has partnered with the U.S. Naval Research Laboratory to develop a three-dimensional zinc sponge structure that allows the metal to be used as an anode in a rechargeable battery for electric vehicles, e-bikes and home energy storage.

EnZinc CEO Michael Burz said recently the zinc-based batteries would be 30 to 50% cheaper than comparable lithium-ion ones, and could be on the market by the end of 2019. Burz said this technology needed only 2 grams of zinc for each watt-hour of energy storage, and unlike lithium-ion batteries, the zinc battery was "totally recyclable."

According to Wood Mackenzie's Leng, another growth area for zinc is in fertilizers. He said while this use was currently low, it had the long-term potential to be "much higher." Canada's Teck Resources has said China alone could consume 300,000 metric tons of zinc in fertilizers.

In the mineral-rich Democratic Republic of Congo, Friedland's Ivanhoe Mines is advancing a joint venture with state-owned Gecamines to exploit the high-grade Kipushi project, with a two-year construction period culminating in an annual production target of 530,000 metric tons of zinc concentrate.

Other big miners are looking to lift output, as new applications for zinc approach commercialization. In its half-yearly production report released on July 28, Glencore said its own zinc output for the first six months of 2017 was up 13% to 570,000 metric tons, reflecting a big rise at its Antamina copper/zinc mine in Peru (which it co-owns with Teck Resources, BHP Billiton and Mitsubishi Corp.) and strong performances from its Kidd mine in Canada, its Rosh Pinah mine in Namibia and its Kazzinc operation in Kazakhstan.

Glencore trimmed some of its zinc operations in northern Australia in 2015-16, but retains its rich deposits at Mount Isa in Queensland and McArthur River in the Northern Territory.

Leng noted that while Glencore had yet to restart idled capacity in Australia, Belgium-based global metals company Nyrstar was reactivating its Middle Tennessee mines in the U.S., and Cuba aimed to start its Castellanos mine in the second half of the year.

Red Dog mine in Alaska, operated by Canada-based Teck Resources, is expected to retain its mantle in 2017 as the world's single biggest mine with output above 500,000 metric tons of zinc concentrate, ahead of India's Rampura Agucha mine, operated by Vedanta. Leng said Wood Mackenzie expected refined zinc production to rise in China over the next year, but he cautioned that the outcome was "very sensitive" to mine production growth. He said this was "being constrained by health and safety and environmental regulation."

Inner Mongolia, Yunnan, Hunan and Guangxi are China's main zinc-producing provinces, though work reportedly has started on what could become the country's biggest mine, at the Huoshaoyun zinc-lead project in Xinjiang.

The price impact will be watched with interest. Canadian bank Scotiabank said in its latest commodities outlook that the zinc price could average $1.40 a pound next year, which equals $3,086 a metric ton. Wood Mackenzie's Leng said this figure was "certainly in the ballpark" and could go as much as $1,000 a metric ton higher if there was a high level of investor interest.