GURGAON, India   Sitting on a couch on the 22nd floor of an office building in this Delhi suburb, Deepinder Goyal, founder and chief executive of Zomato Media, looks relaxed. Tall and lean, the head of India's largest food-focused technology startup wears jeans and sports a little stubble. His words, however, contradict his laid-back demeanor. "This is our turf, this belongs to us and nobody else is going to get in."

The tough talk from Goyal, 33, refers to Zomato's core business -- online searches for restaurants. With his company valued at $1 billion, there is a lot at stake. Zomato has already made a few mistakes and cannot afford to make many more.

There are more than 800 food-related tech startups in India, of which the majority have been set up in the last two years -- 431 in 2015 and 214 in 2014 -- according to data analytics company Tracxn Technology. Since 2010, these startups have received $400 million in funding, with more than half of that coming just in the past year. 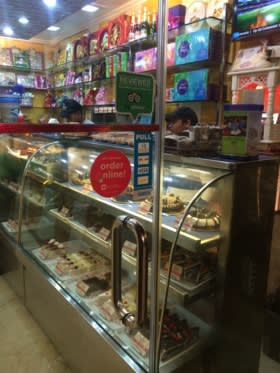 Users can search on Zomato for menus including that of Rainbow's Bakery in New Delhi. (Photo by Megha Bahree)

Zomato, which has so far received $225 million from U.S. venture investor Sequoia Capital, Singapore sovereign wealth fund Temasek Holdings, Indian online classified company Info Edge, and global Internet investment company Vy Capital, is ahead of the competition in online search for eateries, but the rest of the market is still up for grabs.

Goyal and co-founder Pankaj Chaddah, 30, started Zomato in 2008 as a platform for Web surfers to find restaurants. It has since extended its service to 23 countries around the world, partly through acquisitions. It claims to be the market leader in 18 countries and is on track to hit $30 million in annual revenues for the year ending March 31, with 95% of that coming from advertising. Executives aim to reach an operational break-even point by the end of the year, having already reached that milestone in India and five other markets.

RED FACES  Zomato hit a few bumps in 2015. It bought Seattle-based Urbanspoon, a similar restaurant-finding service, for $52 million at the start of the year. The deal largely backfired on Zomato and it wound down Urbanspoon's U.S. services and cut 300 staff midyear, then put a hold on further international expansion.

Goyal shrugs off the Urbanspoon deal as one that "just didn't work"; Zomato tried to implement the labor-intensive restaurant data gathering approach it had succeeded with in India at Urbanspoon but the manpower costs were too high given the strong competition in the market. Nevertheless, Urbanspoon's Australian and Canadian arms have been positive additions for Zomato.

Back in India, Zomato launched an app to handle cashless restaurant bill settlement, but it failed to catch on. However, other new services, including table reservations and online ordering and delivery, have shown more promise, with the latter now offered in India, the Philippines and the United Arab Emirates.

In India, which generates about 35% of company revenues, Zomato gets 600,000 daily unique visitors seeking restaurant recommendations. Of these, 200,000 want restaurants that deliver.

"This 200,000 is a segment we want to protect," said Goyal. "It's the core business. If you let anybody else come into this space, those people could create an upstream discovery product and they could get into search so you will always keep fighting. It's about defending our turf."

Zomato entered the crowded online orders and delivery segment last May competing against Rocket Internet-backed Foodpanda, which offers discounts, and Swiggy, which has no minimum order value requirement and its own delivery network, among others, but there is no clear winner yet. 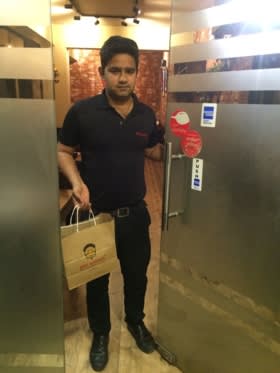 Rising anxiety about slowing global growth has dried up the easy money in India. As a result, a few startups have folded, and others, including Zomato and competitor TinyOwl Technology, which also counts Sequoia as an investor, have retrenched; Zomato closed down online ordering in Lucknow and three other cities that were generating tiny sales volumes.

The fight for Zomato now, as it makes its push for delivery orders, will be not only to protect its territory, but also to persuade customers who have grown used to heavy discounts to pay up.

MINIMAL DISCOUNTING   Zomato has taken a stand in India against hard discounting and offering excessive freebies. It offers discounts only during festivals, charges a delivery fee and has a minimum order requirement, which is set at different levels for different restaurants.

Competitor Swiggy, backed by Norwest Venture Partners and Accel Partners, gets about 20,000 orders a day. Zomato gets about 14,000 on average but hit 17,000 on a recent Sunday. The delivery business currently contributes 4% of Zomato's overall revenue and that share is expected to hit 15-17% in the next financial year.

"We have $40 million lying out there and we can turn on the tap any day we want in terms of discounts," Goyal said. "We can play it very, very dirty if we come down to it. But we're saying we're still No. 1, we're growing very fast, let's not play that game for now."

While it may not be burning cash by employing the tactics of its peers, it has lost money in other ways.

Last year, Zomato ordered several thousand iPads to give to restaurants to help them process orders. It was a costly exercise, and the company has since opted to provide cheaper Android phones to the 12,000 restaurants it partners with instead.

"As food-tech became glamorous, many 'me too' companies have emerged, resulting in hypercompetition which, in turn, resulted in bad unit economics per delivery," said Mohit Bhatnagar, managing director at Sequoia Capital India Advisors. "The good news is that sanity has returned to the global markets. Companies with bad unit economics will not attract capital for much longer and are unlikely to keep promoting and discounting an unprofitable set of transactions. This is the time that Zomato will shine."

STUDENT DAYS   Zomato has its origins in a dorm room-based online food delivery service Goyal set up in 2005 while studying at the Delhi campus of the Indian Institute of Technology. He shut it down six months later to join consulting firm Bain & Co.

Bain employees practically lived at the company, he recalls. Mealtimes meant going through a stack of takeout menus, then calling and placing an order. Goyal decided to scan all the menus and upload them to the office intranet. It was a hit.

Goyal and his colleague Chaddah turned this concept into a sideline business under the name Foodiebay. On weekends, they walked New Delhi neighborhoods, picking up menus and uploading them to their site, a model they still use today. Soon they were making 200,000 rupees a month (approximately $4,250 at the time). They quit Bain at the end of 2009 and with cash from friends and family, started serious work.

In May 2010, Goyal got an email from Sanjeev Bikhchandani, founder and executive vice chairman of Info Edge. He had stumbled upon Foodiebay and was a regular user. Within 10 days of sending Goyal an email, the men had signed a $1 million investment deal that gave Info Edge a 33% stake in the startup. Today with a 47% stake, it is Zomato's largest investor. Info Edge also suggested the name change, arguing it was too similar to eBay.

The deal was the quickest Info Edge has ever done. "It was a clear winner at first sight," said Bikhchandani.

He also likes the fact that the company does not indulge in discounts. "The more you sell, the more you lose and that's a bad model," he said.

While Zomato is providing the answer to the question of where to eat today, the jury is still out on whether it has found the answer to the next step: converting those thousands of online searches for food into orders. The company plans to hit the market within the next few months to raise more cash. How that effort goes will be a sign of whether or not investors are convinced that Zomato's business model beats the competition.