6 million workers on leave in Japan as coronavirus takes toll 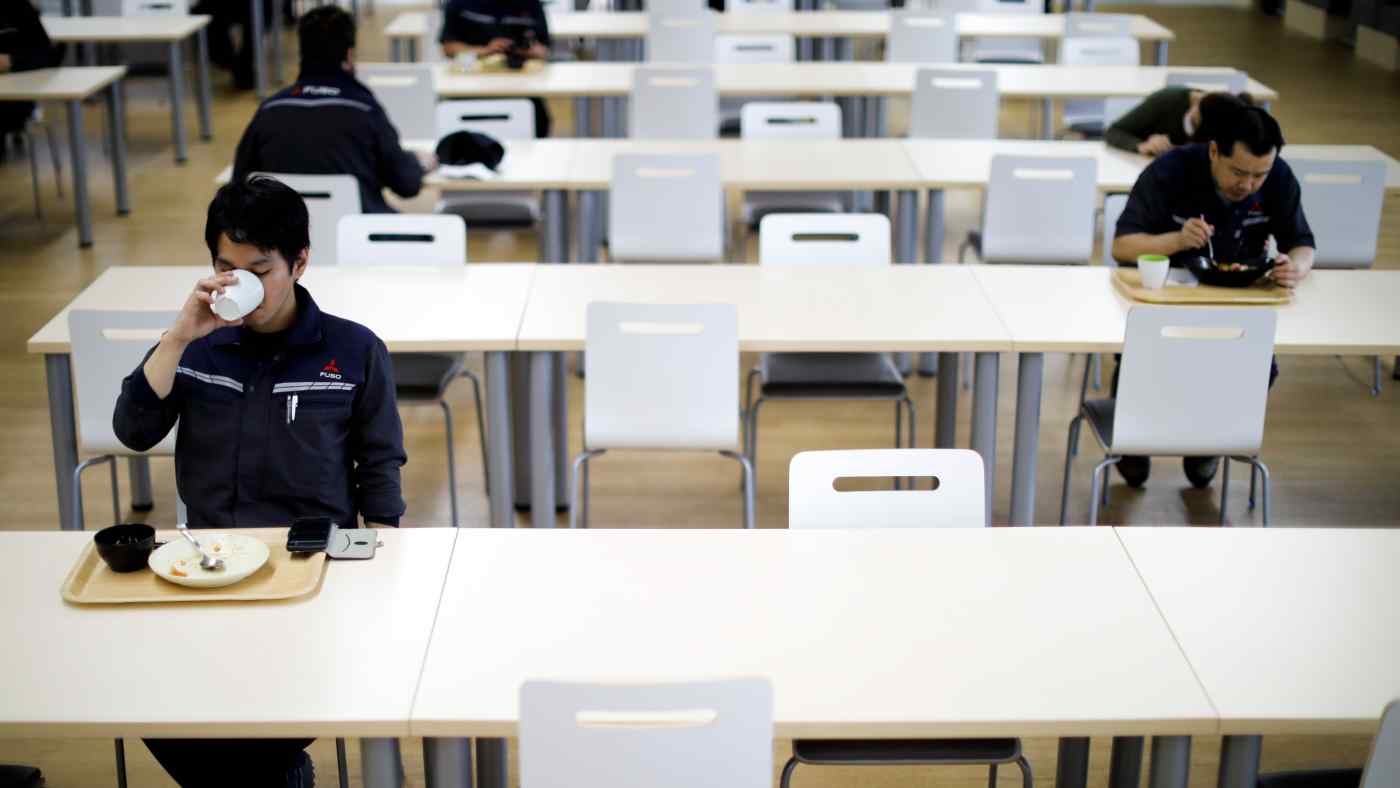 Automakers have cut back operations at many plants, including this Daimler facility in Kawasaki, Japan, due to the coronavirus pandemic.   © Reuters
MARIKO HIRANO, Nikkei staff writerMay 30, 2020 06:15 JST | Japan
CopyCopied

TOKYO -- A record 5.97 million Japanese people were employed but not working last month, official data released Friday shows, as the private and public sectors try to shield workers from the economic impact of the coronavirus pandemic.

The figure, which includes furloughed employees as well as those on parental leave, is about 9% of Japan's entire work force. The total had hovered around 2 million for the preceding year.

"This is a phenomenon we did not see during the Lehman shock," said Minister of Internal Affairs and Communications Sanae Takaichi, referring to the global financial crisis of 2008 and 2009.

Companies forced to shut down or scale back due to reduced demand or the state of emergency declared last month are using cash on hand and employment subsidies to keep workers on their payroll. The government has supported these efforts by expanding the subsidy program and helping businesses raise capital.

But the longer the slump drags on, the greater the risk that companies will fail, making temporary job losses permanent and deepening the damage to the economy.

The data showed 1.78 million people unemployed on a seasonally adjusted basis -- still significantly better than the more than 3.5 million seen during the depths of the financial crisis.

But many of those who have been furloughed "should be considered 'unemployed-in-waiting,'" said Shinichiro Kobayashi, senior economist at Mitsubishi UFJ Research & Consulting. If 1 million workers on leave end up losing their jobs, the unemployment rate, now at 2.6%, would top 4%, Kobayashi says.

The manufacturing sector has been hit especially hard by the global stall in economic activity. The Ministry of Economy, Trade and Industry's index of industrial production sank 9.1% last month, the steepest drop recorded under the current system.

The auto industry alone contributed 5.1 percentage points of the decline with output plunging by a third, which rippled out to related industries such as steel and industrial machinery.

Crude steel production fell last month to its lowest level since July 2009, according to the Japan Iron and Steel Federation, and major steelmakers have shut down blast furnaces in preparation for a long-term demand slump.

The blow to consumer spending, while substantial, looks less severe.

Government data shows retail sales down 13.7% to 10.93 trillion yen ($101 billion) last month, the second-largest decrease since data collection began in 1980, amid the emergency declaration. Department stores suffered a 71.5% drop. But pharmacies and supermarkets actually saw an increase, benefiting from consumers being largely stuck at home.

And a government survey of households shows some green shoots. Consumer sentiment improved 2.4 points this month to 24.0, the first increase in five months.