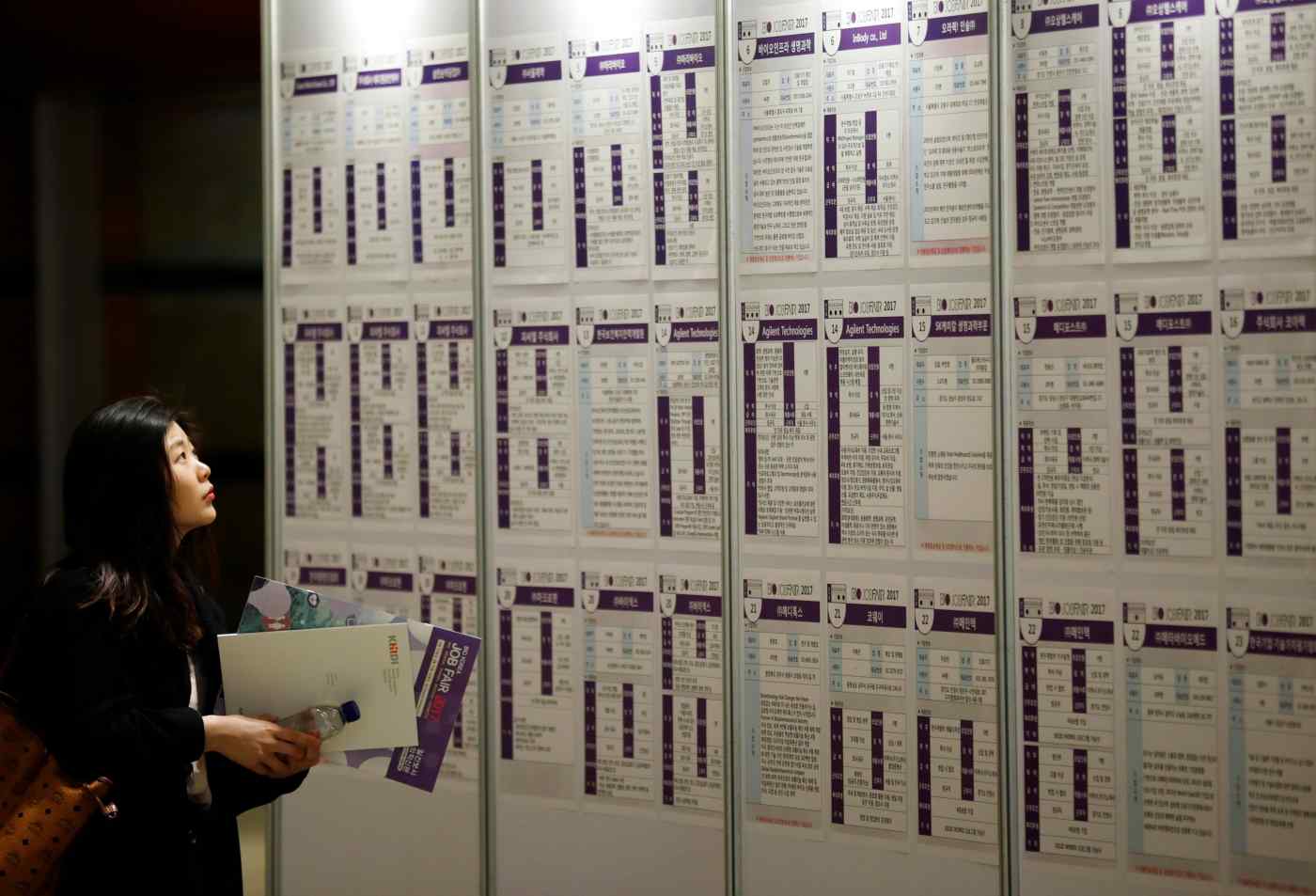 SEOUL Employment in South Korea is about much more than pay. Social status comes from job title and employer, and anyone not at an established company can feel the heavy stigma of failure.

Young people are bearing that burden the most. The unemployment rate among 15- to 29-year-olds is over 8%, which is more than double the overall figure.

Choi Seo-yoon, 31, knows just how hard it can be. She graduated from a university in Seoul but was unable to land the media job she wanted. To get by, she writes columns for newspapers, helps a friend who sells homemade lemon tea and draws portraits for sale. The money is enough for buying food, but not for planning a future.

"I have no confidence that I will make enough money in the long term," Choi said. "I cannot predict my income and expenses beyond a few months ahead. I don't have a credit card to buy things with monthly installments, either. I just pay within my income."

In 2012, after trying for two years to get hired by a newspaper or broadcaster, Choi attempted to turn her misfortune into success. She created a magazine called Remainders -- a word she said describes people who have been left behind by the rat race, either because they stopped looking for jobs or they simply refused to be a part of the conventional crowd. 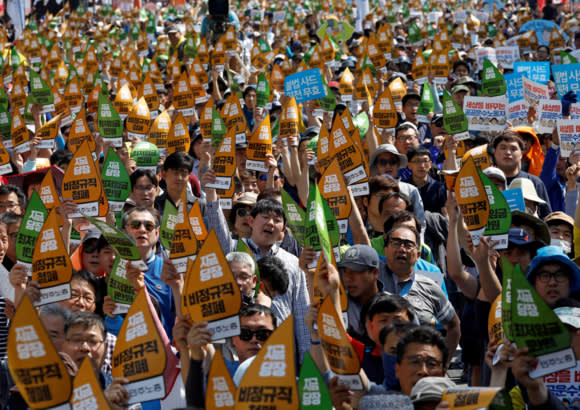 Youth frustration is seen as a key trigger for social unrest in South Korea.   © Reuters

Creating Remainders was Choi's alternative to committing to a job she did not want. The magazine covered everything from politics and culture to dating and marriage. But after 18 monthly and bimonthly issues, she ceased publication. She decided it was time to focus on boosting her income through part-time jobs.

It is a familiar pattern. Small restaurants and shops run by young owners are constantly popping up in Seoul and other big cities. But most quickly fold, victims of high rents and low business acumen. Among 228,460 businesses established by people aged 15-34 in 2011, only 23.5% survived for five years, according to the National Tax Service. 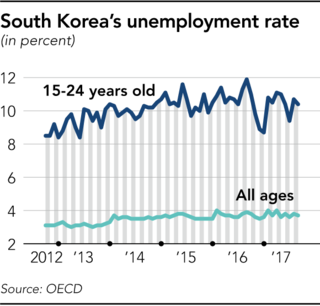 If entrepreneurship is not the answer, then what is? President Moon Jae-in's government has placed job creation at the top of the agenda. It is pushing hard to add positions in the public sector while providing incentives for private companies to boost recruitment. So far, these efforts have accomplished little.

South Korea's youth unemployment looks tolerable compared with countries like Italy or Spain. But Europe had a long recession after a regional debt crisis. South Korea's economy is humming along. Gross domestic product growth hit 3.6% in the third quarter, the fastest pace in seven years.

The problem is "largely due to a lack of quality jobs in the information and telecommunications industry, and the professional and technology service sectors, which young people prefer," South Korea's finance ministry said in a news release last month. "We will accelerate our efforts to give customized support to the vulnerable, including young people."

YAWNING GAP A closer look suggests the roots of the matter are tangled up in the very structure of South Korean industry and society.

The Organization for Economic Co-operation and Development has pointed out the huge gap in both wages and social status between the chaebol -- large conglomerates dominated by wealthy families -- and small and midsize enterprises. This gulf makes today's young job seekers reluctant to commit to smaller companies.

"Korea faces exceptionally strong labor market segmentation, which is associated with a large productivity gap between large firms and SMEs, and the high share of workers who are employed in very small firms," Ha Hyeong-so, a researcher at the Paris-based OECD, said in a report in June.

On top of the high wages, employees at conglomerates enjoy fat bonuses at year-end. For instance, Sung, a manager at an affiliate of SK group, will be paid 50% of his yearly salary as bonus later this month thanks to the company's extraordinary earnings this year. He plans to save this for his wedding next year.

"I want to go to Italy for my honeymoon. I'm glad that I can tie the knot when business is booming for my company," said the manager, who wanted to be identified by his surname only.

Large employers generally offer not only higher wages but also better working conditions, job security and the all-important status. Employment with a big-name company can be vital for finding a marriage partner. Is that not the case everywhere? Perhaps, but in South Korea the scramble for status starts in early childhood.

It is common for parents to engage private tutors for preschoolers to prepare them for the battle ahead. The competition continues in primary and secondary schools, as students cram for places in Seoul's top colleges.

Wealthier families often send their children to expensive private primary schools where a typical day starts at 8 a.m. and ends at 6 p.m. In public schools, classes run between 9 a.m. and 3 p.m.

"Seoul National University is on the top of the hierarchy of universities, followed by private schools in Seoul, colleges in the metro Seoul area, national universities in provincial regions and private schools in provincial areas," explained Lee Chul-ho, head of a civic group called the Society without University Cartel. "And inside each university, departments are lined up by the order in which they lead to well-paid jobs."

The International Monetary Fund suggests South Korea's polarization and inequality are only getting worse, marginalizing both young people and the elderly.

Earlier this year, a Gallup Korea survey of 850 people between the ages of 19 and 31, excluding college students, found the respondents were getting by on an average of 1.58 million won a month. The monthly minimum wage is 1.35 million won. 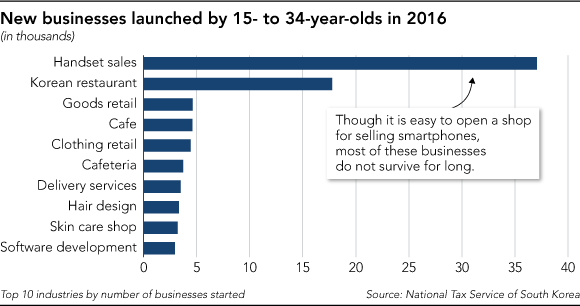 Many young people are borrowing to make ends meet. On average, people in the 19-31 age range have 13 million won worth of debt to financial institutions, according to the country's financial regulator. Some resort to consumer lenders that charge high interest rates.

NO PARADISE FOUND "Lost generation," a term often used in Japan to describe those who faced the vicious job market of the late 1990s, is becoming an increasingly common refrain in South Korea.

Some debt-saddled young people call their country "Hell Korea." Their anger is believed to have been a factor in the Candlelight Revolution -- the protest against former President Park Geun-hye, who was ousted earlier this year.

But some are moving abroad in the hopes of finding more conducive environments in which to work and live, for example, Canada, Germany and Japan. A man named Park, 38, who had worked for a small machinery company in western Seoul, left for British Columbia in Canada earlier this year to become a sushi chef. Even though he knew nothing about making Japanese food, he thought it would be better to leave than to stay at a company that was facing bankruptcy.

He said he felt that companies in Western countries treat workers better than those in South Korea, his impression from a language course in his early 20s.

The International Labor Organization has warned of rising social unrest linked to unemployment in a number of places. South Korea, clearly, is not immune. Economists argue the government needs to spend more to tackle youth joblessness, before it leads to more serious problems down the road.

"The government should consider creating jobs for youth and setting up a social safety net using state funds," Rhee Chang-yong, the director of the IMF's Asia and Pacific Department, told South Korean reporters in Washington in October. "If we do nothing about youth unemployment and senior poverty, it may cause more demand for state funds in the future."

Kim Joo-young, a researcher at the Korea Institute for Industrial Economics & Trade, said the country should look to new industries with major job-creation potential.