LONDON  The oil markets have never been awash in so much crude. Global benchmark prices are hovering at 12-year lows of around $30 per barrel, and stockpiles -- already at record highs -- look set to keep swelling. There is talk of prices tanking to as low as $10.

Fears are growing that the Chinese economy is headed for a hard landing. But China is not the only concern; with liquidity drying up following the U.S. interest rate increase last year, the slowdown in emerging economies worldwide has become increasingly conspicuous. Spooked, investors are unloading stocks and other risk assets. They are also fleeing crude, and the market outlook for the commodity is deteriorating fast.

If the dollar keeps strengthening, it could push crude prices even lower, according to Adam Longson, head of energy commodity research at Morgan Stanley. "Given the continued U.S. [dollar] appreciation, $20-25 oil price scenarios are possible simply due to currency," Longson said.

Generally, crude trade is denominated in dollars. When the dollar strengthens, it weakens the currencies of emerging economies. That, in turn, makes crude overpriced in those markets, putting downward pressure on the price.

YUAN JITTERS   Longson is particularly concerned about the impact of a continued slide in the Chinese currency against the dollar. Because China, as a major exporter, is not especially averse to a weaker yuan, the dollar's trade-weighted effective exchange rate is increasing. A weaker yuan also places more selling pressure on the currencies of emerging economies. If the yuan softens, crude demand in China and other emerging economies may fall further.

Speculators only add to the problem by making crude prices more volatile. "We think prices could fall as low as $10 per barrel before most of the money managers in the market concede that matters have gone too far," said Paul Horsnell, head of commodities research at Standard Chartered Bank. As time goes on, the effects of the glut will likely be felt even more strongly on the demand side. In mid-January, the U.S. and Europe decided to lift economic sanctions against Iran, giving the country the green light to resume crude exports. The U.S. Energy Information Administration predicts Iran will respond by cranking up daily output from the current 2.8 million barrels to 3.3 million by the end of 2016, and up to 3.7 million at the end of 2017. Production cuts in the U.S. and elsewhere will probably partially offset the impact of Iran's oil blitz, but OPEC nations are pumping out oil as fast as ever, churning out as much as 32.1 million barrels per day in December last year.

With Iran back in the game, competition among oil exporters is expected to become fiercer. "Iran has to fight to win back market share in Europe and Asia," said Michael Wittner, global head of oil market research at France's Societe Generale. The lifting of sanctions means not only more oil sloshing into the market but also competition-fueled price cuts.

Said Wittner, "At least in the early stages, Iran may use some combination of price discounts, easy payment terms, and perhaps paying some or all freight for customers." Iran already appears to be offering favorable terms for India.

Some OPEC member states are calling for an emergency general meeting to discuss the price plunge ahead of the regular June gathering. Nigerian oil minister Emmanuel Ibe Kachikwu is urging close cooperation among members. While Venezuela is on board with that idea, Saudi Arabia, which has cut diplomatic ties with Iran, is reluctant to hold a special meeting. Given its internal problems, OPEC is unlikely to work out an effective solution.

And so the oil keeps flowing, pushing inventories ever higher. According to the International Energy Agency, as of November last year, stockpiles among member countries of the Organization for Economic Cooperation and Development totaled about 3 billion barrels, an all-time high. 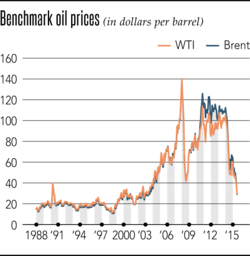 "The cumulative build in inventories to date suggests pricing pressure could peak in the second quarter of 2016, when the risk of exhausting onshore storage peaks," said David Martin of J.P. Morgan Securities. He has drastically cut his price forecast, predicting North Sea Brent crude will average $25 per barrel in the April-June quarter. Some market participants also see prices for deferred-delivery contracts remaining below $50 from 2020 onward.

The downward spiral in crude prices is shaking the finances of oil-producing countries. The global ramifications are considerable. According to the Institute of International Finance, stocks and bonds of emerging economies account for about 15% of the assets owned by the sovereign wealth funds of oil producers. In 2015, the balance of investment in emerging economies fell by about $50 billion on the year as investors unloaded their assets. And while there was still a net capital inflow into those countries due to sovereign wealth funds of non-oil-producing nations boosting investment by $77 billion, the figure was the lowest since 2010.

SHRINKING POOL   Aberdeen Asset Management, a leading U.K.-based asset management company that focuses on emerging economies, is being pummeled by cancellations by Middle Eastern sovereign wealth funds. In the July-September period of 2015, the company reported a net outflow of 12.7 billion pounds ($17.9 billion at current rate) in assets under management. "If the oil price remains low, we will see more redemptions from sovereign wealth funds," said its chief executive, Martin Gilbert.

It was petrodollars that provided the massive liquidity to the global financial markets. With that pool of money shrinking, those markets have become shrouded in uncertainty. And that is but one of the many facets of the global economy being undermined by the oil collapse.