Japan losing out in rich fisheries to China, North Korea, Taiwan, US TOKYO -- In ominous times, the world is already at war over fish, and seafood-loving Japan finds itself pitted against fish-hungry nations and regions like China, North Korea, Taiwan, and the U.S.

Japan has been losing out to the competition lately, and finds it increasingly difficult to ensure steady supplies to homes and restaurants. Even inexpensive species used for general consumption, such as mackerel and squid, have become less affordable.

The home of sushi and sashimi, Japan was once the world's pre-eminent fishing nation, processing the largest ocean catch for 16 consecutive years until 1987. It never regained the top slot after that, and its fishery output, including aquaculture, has fallen back to around 4 million tons from 12 million tons at its peak.

The world's per capita consumption of fish and shellfish has more than doubled over the past half century because of increasing health consciousness, particularly among U.S. and European consumers, and rising demand from emerging economies.

China has developed a particularly strong appetite, and is now the world's biggest consumer of seafood. With a population of over 1.38 billion people, the world's most populous country has seen its ocean catches swell by over 20% in the past five years. Fisheries closest to its shores have been overfished and harmed by industrialization, however.

Chinese fishermen sail the world in search of new grounds, bringing them into contact with their Japanese and South Korean counterparts. Chinese media sometimes depict this as a maritime version of ancient China's Three Kingdoms. A crew lands a full catch of saury at Japan's Hanasaki Port in Nemuro, Hokkaido, in August.

In mid-August, the saury fishing fleet returned at dawn to the Japanese port of Hanasaki in Nemuro, Hokkaido. it was the first full landing of saury, or mackerel pike, of the year, and the combined catch was 700 tons. A senior official from the Hokkaido saury fishery association was unhappy with the "slender" fish he beheld. The silvery saury used to weigh from 150-180 grams apiece, but now they average about 120 grams -- less than sardines.

The problem is as much about quantity as weight. According to the national saury association, the landed volume fell to a record low of 109,000 tons in 2016 -- half the 2014 figure, and a third of 2008. Reasons for the decline include higher seawater temperatures. Yet China and Taiwan have both had record saury catches, according to the Tohoku National Fisheries Research Institute.

Three or four years ago, fleets of large Chinese and Taiwanese boats started appearing outside Japan's 200-nautical mile (370km) exclusive economic zone off Hokkaido and elsewhere. The vessels had state-of-the-art equipment, including "tiger nets" that are used with underwater lights to boost catches.

The Chinese do not have a big history of eating saury, so the increased catch needs explaining. Takeshi Hamada, a professor at Hokkai-Gakuen University in Hokkaido, said the number of Chinese saury vessels increased after a massive earthquake precipitated the tsunami that hit northeastern Japan on Mar. 11, 2011. The earthquake also caused the Fukushima nuclear disaster.

Japan had been exporting saury and mackerel to Russia, where they are consumed as canned food. Russia cut off Japanese fish imports after the 2011 disasters, and looked to China and Taiwan to fill the gap. "Japan was deprived of both fishing grounds and business," said Hamada. 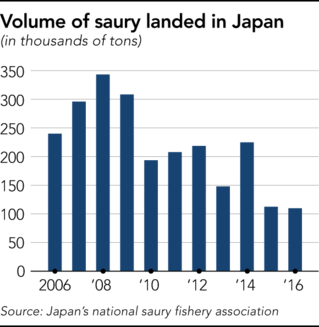 In mid-July, the North Pacific Fisheries Commission held a saury conference in Sapporo, Hokkaido, to discuss overfishing of the North Pacific. Japan proposed the introduction of country quotas, but China strongly opposed the idea with support from Russia and South Korea. The proposal failed.

Masanori Miyahara, president of the Japan Fisheries Research and Education Agency, attended the conference and remains pessimistic. "Our efforts to persuade China face a rocky road ahead," he said. Talks on ways to prevent overfishing are due next year, but sharp differences remain.

Japanese bonito and squid fishermen also face tougher foreign competition. Kesennuma in Miyagi Prefecture, which bore the brunt of the 2011 earthquake, has been Japan's biggest bonito port for 20 years straight. In the July-October peak season, daily landings once ranged from 500 to 1,000 tons, but have now dropped to no more than 400 tons, according to the local fishery association. Freshly caught bonito are brought back to port of Onahama in Iwaki, Fukushima Prefecture.   © Kyodo

Bonito, or skipjack tuna, is sold as canned tuna and pet food, among other things, and is being fished increasingly fiercely in the rich waters of the South Pacific by vessels from China, Taiwan, and the U.S., according to Katsukura Gyogyo, a fishing company based in Kesennuma. The boats there have got bigger by the year, and are fitted out with the latest equipment to lure and process fish. The price of frozen bonito has roughly doubled in the past two years to around $2,000 per ton on the Bangkok market, which sets the international benchmark.

In July, North Korean vessels were found by fishermen from Fukui Prefecture operating illegally in Yamatotai, an area in the Sea of Japan known for rich sweet shrimps and squid. "It is so dangerous that we cannot fish there," said one fisherman. The North Koreans use drift nets to catch squid, and only turn on very small lights at night, raising the risk of collision. Japanese sweet shrimp hauls were down this summer 20% year on year, partly due to voluntary restraint. Local fishermen want the authorities to crack down on the North Korean vessels entering the Japanese EEZ -- illegally and dangerously.