A tale of Kyrgyz gold, greed, poverty ... and disaster? BISHKEK -- No one knew until 1978 that there was much gold sprinkled across the glacial plateaus in Kyrgyzstan's section of the Tian Shan mountain range. That it took another 19 years for mining to begin tells of how costly and difficult getting the gold out was.

These days, the Kumtor gold mine, at the glaciers' edge, is central to Kyrgyzstan's economy, accounting for more than a third of the country's exports, around a quarter of its industrial production and around 6% to 12% of its gross domestic product. It is the Central Asian state's biggest employer and its biggest taxpayer.

The mine is no less important to its owner, Canada's Centerra Gold. Kumtor's output accounts for 87% of the company's $267 million in first-half revenue.

Yet in June, an increasingly nasty fight between Centerra and the Kyrgyz government -- the company's biggest shareholder, through state mining company Kyrgyzaltyn -- nearly led to Kumtor's closure. Though an interim solution has resolved the stand-off, there's little sign Kumtor's outlook is improving.

In the cross hairs

Some politicians portray Centerra and its corporate predecessors as the partners of corrupt former Kyrgyz leaders. They talk of shady deals and heedless pollution. They have pushed for Kumtor's nationalization and forced the company to renegotiate its stake in the mine but they have balked at the new arrangement  worked out by the government. In April, parliament passed a law that would ban activities damaging glaciers; President Almazbek Atambayev sent the law, whose terms could potentially force Kumtor to close, back for revision.

Protesters have demanded that Centerra increase funding for local infrastructure, schools and hospitals. In May 2013, they blocked the access road and cut off power to Kumtor. The mine had to close for two days. Five months later, demonstrators stormed the offices of the regional government, and took the governor hostage and threatened to burn him to press their demands for increased Kyrgyz ownership of the mine. 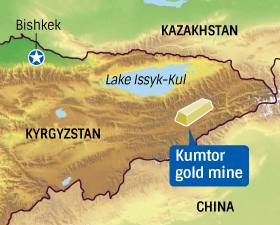 The national government is also ratcheting up the pressure and has cancelled Centerra's land use rights. Environmental agencies have filed claims for $476 million. Prosecutors alleging procedural misconduct in May sued to unwind a $200 million dividend Kumtor paid to Centerra at the end of 2013. They also arrested a Kumtor director, a Kyrgyz who also serves as Kyrgyzaltyn's chief executive.

Seeking to open a new front, Kyrgyz prosecutors have said they are discussing allegations of corruption with their Canadian counterparts. This follows reports by Israeli legal and accounting firms commissioned by the government that raised questions about $15 million in money transfers made in 2002 and 2004 by Cameco, Centerra's former parent company, which first got involved at Kumtor in 1992.

Prosecutors last year charged 10 former government officials with corruption over a contentious 2003 restructuring pact with Cameco in which Kyrgyzaltyn traded its two-thirds stake in Kumtor for about a third of the newly formed Centerra. Five of the officials are on the lam in Russia; the other five were convicted in January but immediately released, as the judge cited a 10-year statute of limitations.

Centerra denies all wrongdoing, but John Pearson, vice president for investor relations, told an interviewer Aug. 15 that management is staying away from Kyrgyzstan because of the court cases. As far as the company's environmental record goes, it acknowledges a Kumtor truck spilled 1.7 tons of toxic sodium cyanide into a river after a 1998 crash.

The company's shares have fallen more than 70% over the year and a half since the Kyrgyz parliament put the mine in its cross hairs. It no longer carries political risk insurance after its rates soared when its last Kyrgyz policy expired in November 2012.

In the face of the multipronged legal and political assault, Centerra on June 2 threatened to close Kumtor within 11 days. It said its annual work plan had not been approved and that its operating permits had not been issued after more than five months of red tape. It complained of "significant uncertainty and risks."

The government met Centerra's deadline, issuing its 2014 approval June 11. "Kumtor's shutdown is not an option," said Joomart Otorbayev, who became prime minister in April. "We'll do everything possible to resolve the situation."

Otorbayev's next challenge is to finalize another restructuring agreement with Centerra and then corral enough support to win approval from parliament. A preliminary agreement, reached in December, would see Kyrgyzstan swap its 32.7% stake in Centerra for half-ownership of Kumtor itself. Some legislators, though, continue to push for a Kumtor stake of two-thirds or more.

Kyrgyzstan faces external pressure to reach a deal. A Canadian court ruled in April that a Turkish investment company could seize Centerra shares from Kyrgyzaltyn to satisfy a $9.1 million arbitration judgment over the nationalization of a hotel in Bishkek. Kyrgyzstan is appealing the decision.

And in June, a Russian arbitration board awarded $118 million to Canadian mining company Stans Energy over a licensing dispute with Kyrgyzstan. Stans Energy too could pursue the country's Centerra shares.

Kumtor has been a rallying point for activists and politicians since then President Kurmanbek Bakiyev in 2010 fled the country amid violent protests. The country's political scene has been turbulent ever since, with the prime ministership changing six times.

With all deals reached by Bakiyev under scrutiny, attention has focused on a 2009 Kumtor restructuring that raised taxes and other fees as well as restored Kyrgyzaltyn's one-third stake in Centerra, a stake that had been sold down.

Many now argue Kyrgyzstan should have gotten more from the Canadian company in that deal. "What is happening is part of a socially unresolved issue," said Amanda Wooden, an associate professor of environmental politics and policy at Bucknell University in the U.S. who has studied the Kyrgyz protests. "Certainly, the Kyrgyz government is trying to make the deal more fair, as far as they see it, and some politicians in Kyrgyzstan see 50-50 as unfair."

Kaliya Moldogaziyeva, a local environmental activist, said the Kumtor controversy has been "compounded by Centerra's failure to engage with the local population."

Yet while some politicians are pushing for nationalization, many recognize that Kyrgyzstan lacks the technology to handle the challenges of Kumtor, which is 4,000 meters above sea level and frequently affected by shifting soil and ice. More than $1.6 billion has been invested in the mine's development.

"We do not have enough skills at the state level," said Emil Umetaliyev, former minister of economic regulation. "Political games of this kind usually lead to disaster and poverty."