MANILA -- The head of the Asian Development Bank on Thursday warned countries against unsustainable borrowing to fund infrastructure projects, which could leave them stuck in a debt trap.

ADB President Takehiko Nakao told reporters that China's Belt and Road Initiative is a key program to connect regions and broaden integration and cooperation across Asia, and that the ADB would cooperate with China when appropriate. But he cautioned against excessive borrowing to cover infrastructure gaps.

"If countries borrow too much for certain infrastructure without seriously looking at the viability and feasibility," he said, "it will bring more trouble in repayment."

Nakao was holding a news conference during the multinational lender's 51st annual meetings at its Manila headquarters. "We should look at debt sustainability issues very seriously," he added.

Nakao echoed the concerns of International Monetary Fund Managing Director Christine Lagarde over unsound fiscal policies. In April, Lagarde told a conference in China that the initiative could put a heavier burden on countries already saddled with a lot of public debt. 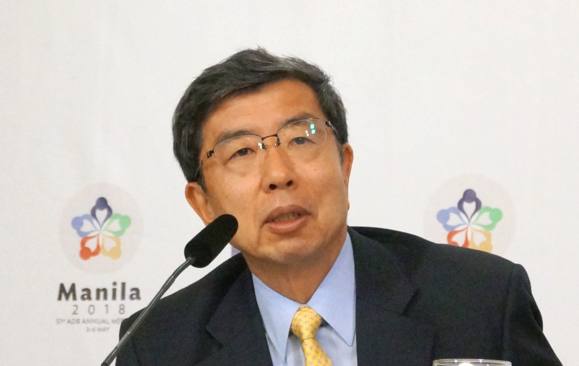 "In countries where public debt is already high, careful management of financing terms is critical," Lagarde said. "This will protect both China and partner governments from entering into agreements that will cause financial difficulties in the future."

China's Belt and Road Initiative aims to develop up to $8 trillion worth of infrastructure along trade routes between Asia and Europe.

The Center for Global Development, a Washington-based think tank, said in a March report that 23 countries are at risk of debt distress due to additional financing related to the Chinese infrastructure drive. Eight are of "higher concern," including Laos, Maldives, Pakistan, Mongolia, Tajikistan and Kyrgyzstan.

"There are some countries, most of whom are small and relatively poor, that face a significantly increased risk of a sovereign debt default if planned BRI projects are implemented in an expeditious manner and financed with sovereign loans or guarantees," the report said.

The ADB estimates Asia's infrastructure needs could reach $22.6 trillion through 2030, or $1.5 trillion annually. If climate change adaptation measures are adopted, the cost would rise to over $26 trillion.