ADB forecasts rapid growth for China and India in 2021 A faster-than-expected recovery from the pandemic in China has helped to pull up the economic projection for the whole Asian region.    © Reuters
CLIFF VENZON, Nikkei staff writerDecember 10, 2020 10:30 JSTUpdated on December 10, 2020 16:05 JST | Philippines
CopyCopied

MANILA -- China and India's economies are expected to expand rapidly in 2021, improving the outlook for developing Asia after the coronavirus sunk the region into recession this year.

China, where the COVID-19 outbreak was first reported a year ago, is projected to grow 2.1% this year from 1.8% forecast in September, the Asian Development Bank said in its final update for the year in its widely followed publication Asian Development Outlook. The region's largest economy is poised to grow 7.7% next year.

India is likely to contract 8% instead of 9% this year, before rebounding to an 8% growth next year, the ADB said.

Developing Asia's first economic contraction in nearly six decades is likely to be less severe than initially thought, thanks partly to China's faster-than-expected recovery from the coronavirus pandemic.

The regional gross domestic product is now expected to shrink 0.4% in 2020, slightly improving from the 0.7% projected in September as more economies reopen from pandemic-induced lockdowns and vaccines become available, the ADB said on Thursday. The multilateral lender maintained its 6.8% regional growth forecast for next year.

"The outlook for developing Asia is showing improvement," ADB Chief Economist Yasuyuki Sawada said in a statement. "Growth projections have been upgraded for the People's Republic of China and India, the region's two largest economies," he said.

"A prolonged pandemic remains the primary risk, but recent developments on the vaccine front are tempering this," Sawada added. "Safe, effective, and timely vaccine delivery in developing economies will be critical to support the reopening of economies and the recovery of growth in the region." 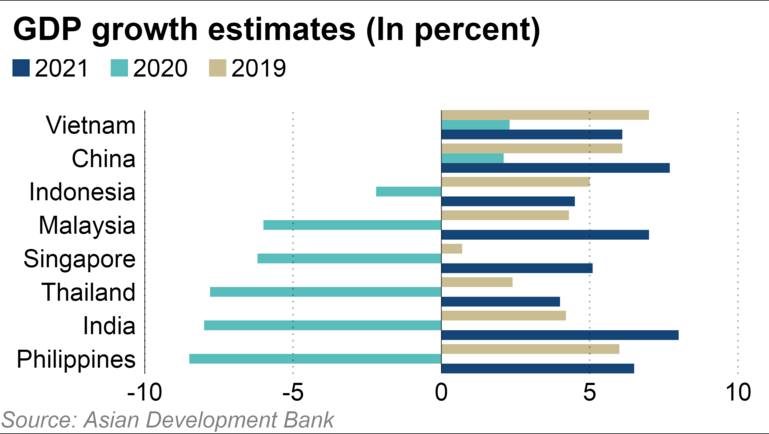 East Asia is the only subregion that is expected to grow this year, expanding by 1.6% -- instead of the initially expected 1.3% -- before expanding further to 7% next year. Taiwan, which is part of the subregion and one of the few success stories in battling COVID-19, is set to report growth of 1.7% -- instead of 0.8% -- before recovering further to a 3.3% expansion in 2021.

The economy of South Asia, which includes India, is now expected to contract by 6.1% instead of 6.8% before growing 7.2% next year.

Meanwhile, Southeast Asia's outlook has deteriorated further as major economies like Indonesia and the Philippines continue to grapple with rising coronavirus infections and partial lockdowns. The subregion is expected to contract 4.4% this year, more deeply than the 3.8% previously projected, before expanding 5.2% in 2021.

Projections for Central Asia and the Pacific region were kept unchanged at contractions of 2.1% and 6.1%, respectively. However, they are expected to grow 3.8% and 1.3%, respectively, next year.