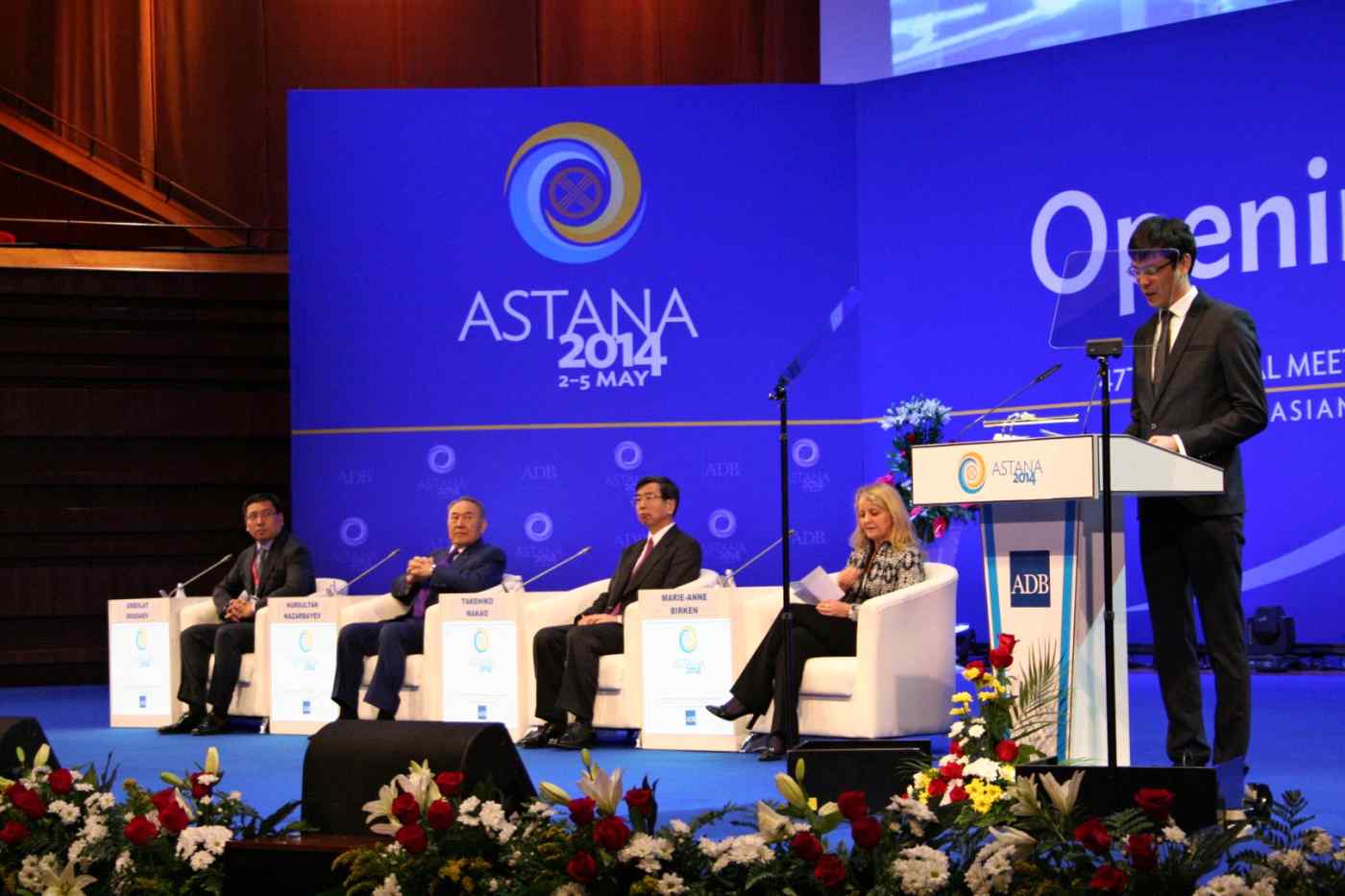 Asian Development Bank President Takehiko Nakao, third from left, pushed through a proposal to integrate the Asian Development Fund into the bank's capital base at the bank's annual meeting in Astana from May 2 to May 5.
MINORU SATAKE, Nikkei staff writerMay 11, 2014 07:00 JST | ASEAN
CopyCopied

ASTANA, Kazakhstan -- The Asian Development Bank is redefining its principal mission, as healthy economic growth in many Asian countries reduces poverty sharply and expands the ranks of the middle class.

The ADB is now shifting the focus of its development aid policy from poverty reduction to helping meet the demand for finance in middle-income countries. The change was apparent at the 47th Annual Meeting of the bank's board of governors, which took place from May 2 to May 5 in Astana, the capital of Kazakhstan. The meeting marked a turning point in the development bank's nearly half-century history.

In his opening address, ADB President Takehiko Nakao proposed ending a program financed by the Asian Development Fund that is aimed at providing loans to the poorest countries. This marks the first step toward changing the bank's main role from helping members fight poverty to supporting their efforts to become middle-income countries.

Broad in the middle

During the May 4 meeting of finance ministers and other top economic policymakers from the 67 member-countries, Indonesian Finance Minister Chatib Basri stressed the rapid growth of the middle-class in Asia, predicting that by 2021 more than 2 billion Asians will fall into that income bracket.

In 2010, about a fifth of the population in developing Asia lived below the poverty line -- defined as those living on less than $1.25 per day -- according to the ADB. If the region's economies continue growing at their current pace, this share will decline to 1.5% by around 2025.

Seven low-income countries in Asia had annual per-capita gross national incomes (GNI) of less than $1,036 at the end of 2012. By 2025, only two, Nepal and Afghanistan, will be below that level, according to ADB forecasts. The rest are expected to join the middle-income group -- that is, those with a GNI between $1,036 and $12,615.

The predicted expansion of the middle-income population will create many new business opportunities in the region, especially in finance and trade.

Japanese companies hope to benefit from the expected spending boom in Asia, as indicated by recent acquisitions and alliances.

Last year, for instance, Mitsubishi UFJ Financial Group purchased Thailand's Bank of Ayudhya. In March, major snack food maker Calbee set up a joint venture in the Philippines with Universal Robina, one of the country's largest food and drink makers.

The ADB was founded with the objective of eliminating poverty in Asia, and the number of poor countries and people has indeed fallen since the bank began operating in 1966. It is one of the few international organizations in which Japan plays a major leadership role.

Over time, ADB has broadened its goals and financial support programs. It now provides financing for infrastructure and human-resource development, for instance, and often extends loans together with private-sector banks.

To meet the changing financing needs of its members, Nakao proposed scrapping the lending program financed by the Asian Development Fund, and using the money to plump up the bank's capital base. The ADB has some $17 billion in capital. By issuing bonds, the bank has raised three times that amount to finance its lending in the region.

By contrast, the $33 billion Asian Development Fund does not raise money in capital markets. It is a pool of funds contributed by Japan, the U.S. and other countries that extends low-interest loans and grants aimed at combating poverty in the poorest member-countries.

Under Nakao's plan, this fund will be folded into the bank's capital. Armed with an enhanced base of $50 billion, the bank can double the amount of money it raises in the market to finance its lending. This would allow the ADB to provide fuel for economic growth in Asia without compromising its financial health, the bank believes. The proposal was approved at the meeting and will be implemented in 2017.

The ADB estimates the region needs annual infrastructure investments totaling $800 billion, and that amount is likely to grow as more Asians join the middle class in the coming years. To meet the financing needs of emerging economies in the future, the bank believes its capital base must grow.

The ADB believes the capital reform is vital to its efforts to carve out a future for itself as a key provider of funds for development in a richer Asia.