With exports and domestic consumption crashing, China, the world's second largest economy, could be on course for losses of up to $1.6 trillion this year, according to the ADB.    © Reuters
CLIFF VENZON, Nikkei staff writerMay 15, 2020 10:33 JST | Philippines
CopyCopied

MANILA -- The COVID-19 pandemic threatens to lop off up to a tenth of the global economy, according to a study released Friday by the Asian Development Bank that suggests the disaster is likely to be even more devastating than previously expected.

The ADB, a multilateral lender based in Manila, said on Friday that the virus could cost the global economy between $5.8 trillion and $8.8 trillion, or 6.4% to 9.7% of its total output. The loss estimates are significantly higher than the $2 trillion to $4.1 trillion the ADB predicted on April 3.

Borders have been shut and internal movements severely curtailed after countries around the world adopted at huge economic cost various strategies to inhibit the spread of the coronavirus.

Asia-Pacific is expected to account for 30% of the decline in global output, racking up probable losses of between $1.7 trillion to $2.5 trillion in a containment scenario spanning three to six months. That is in the range of 6.2% to 9.3% of GDP, according to the ADB. 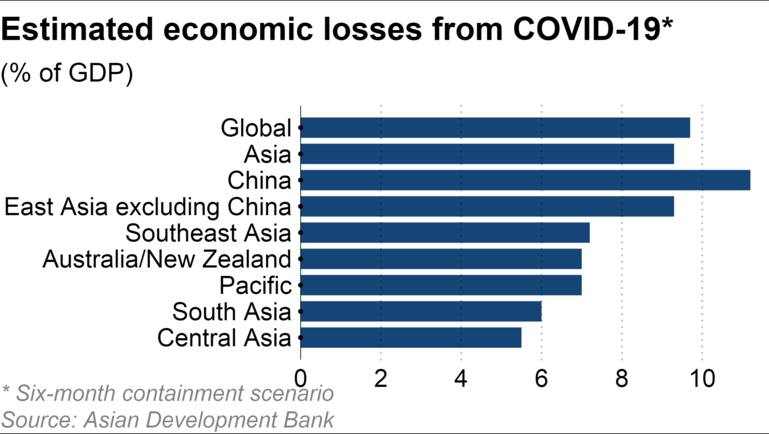 The ADB said sustained fiscal and monetary stimuluses might reduce the economic devastation globally by up to 40%.

"The COVID-19 impact under the long containment scenario is large, " the ADB said. "Thus, policymakers should aim for quick containment at all costs."