Acceleration of digitization expected due to COVID-19 pandemic 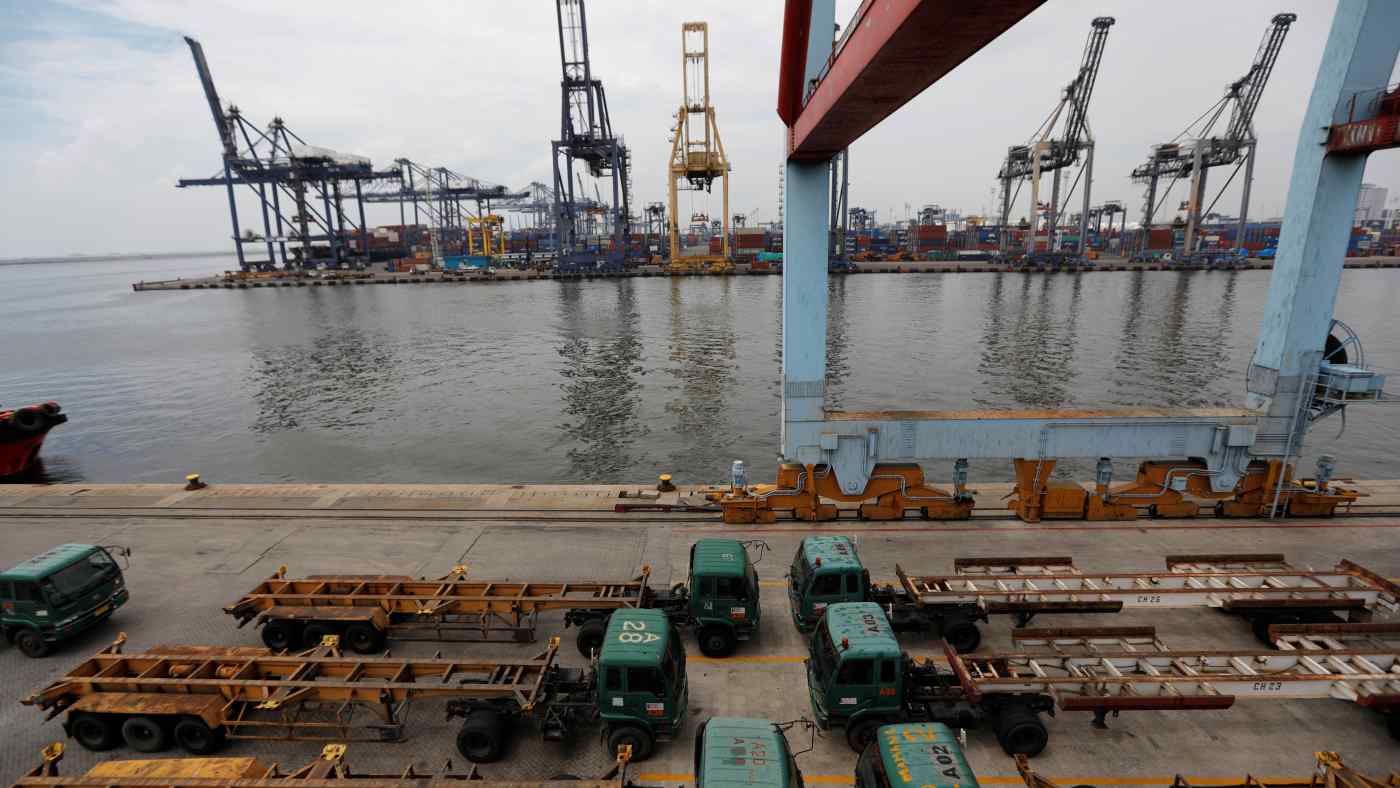 The coronavirus pandemic has hit Asian economies hard. Conditions in the ASEAN5 countries and India are still deteriorating, with trade and movement of people restricted in an attempt to control the spread of the virus.    © Reuters
KIYOSHI KUSAKA, Principal economist, Japan Center for Economic ResearchJuly 7, 2020 10:30 JST | Southeast Asia
CopyCopied

The outlooks for Asian economies have further deteriorated in the last three months as the impact of the coronavirus outbreak and consequent business restrictions have intensified throughout the region.

The economies of five major Southeast Asian countries and India shrank significantly in the April-June period, and the annual growth projections fell below zero for the six countries. Unemployment is on the rise. Economists expect recoveries from the second half of the year, but this scenario is based on the condition that the pandemic will be controlled properly.

The Japan Center for Economic Research and Nikkei conducted a quarterly consensus survey from June 5-25, collecting 38 answers from economists and analysts in the five biggest ASEAN members -- Indonesia, Malaysia, the Philippines, Singapore and Thailand -- and India.

Facing the COVID-19 pandemic, the ASEAN5 countries and India introduced measures in March to restrict the movement of people and business activities, aiming to contain the outbreak. The Philippines introduced lockdown measures in Manila on March 15. India ordered a nationwide lockdown on March 25. These measures continued until May or June, followed by partial easing.

The pace of increase has slowed in Malaysia, Thailand and Singapore for now. But it is still rising in India, where more than 500,000 cases have been confirmed as of the end of June. Concerns over a second wave of infection persist throughout the region. Business activities have been constrained by lockdown and other measures in these countries. The growth projection for ASEAN5 for the April-June period is -7.8%, marking a sharp drop of 9.7 points from the previous survey in March. Negative growth rates are forecast for all five countries; rates are projected to decline by more than 10% for Malaysia, Thailand and Singapore in the second quarter through June.

"The sharp drop in [the second quarter] reflects [the effects] of a three-month nationwide lockdown from March 18 to June 9," explained Vincent Loo Yeong Hong of KAF Research in Malaysia. "The Thai economy will be hard hit through tourism, export and lockdown impact channels," remarked Panundorn Aruneeniramarn of Siam Commercial Bank in Thailand.

Growth projections for 2020, as well as for the third and fourth quarters, are negative for each of the five ASEAN economies.

Many economists in ASEAN5 expect recovery in the second half of the year, but this scenario will be realized only when the pandemic is effectively controlled. "[As long as] the COVID-19 outbreak in Thailand will be contained within [the second quarter] ... we expect that the economy bottomed out in the second quarter," commented Lalita Thienprasiddhi of Kasikorn Research Center on the Thai economy. "A strong rebound" will be "seen in 2021 should the pandemic be effectively contained within this year," added Pauline Revillas of Metrobank on the Philippine economy.

Manu Bhaskaran of Centennial Asia in Singapore commented that "the global economic activity recovering from [the third quarter 2020], with a stronger bounce in [the fourth quarter 2020] ... [as long as] secondary waves of infection are contained well." India's economy is estimated to have shrunk by 20.6% in the April-June period. "The COVID-19 outbreak and attendant containment measures implemented by the government to contain the spread, including a prolonged and stringent lockdown, brought economic activity to a standstill," remarked Tirthankar Patnaik of National Stock Exchange of India. The growth forecast for fiscal 2020/21 is -5.1%, down by 10.2 points from the previous survey in March.

The country introduced a nationwide lockdown on March 25. Millions of migrant workers were forced to return from cities to their home villages; millions of workers have reportedly lost their jobs.

The Indian government announced an economic package of 20 trillion rupees, worth about 10% of GDP, to support the economy on May 12. The government also began to ease its lockdown step-by-step from early June. The infection, however, continues to spread.

Looking forward, Punit Srivastava of Daiwa Capital Markets India commented: "The risk to growth remains high as India is yet to see any flattening of the COVID-19 curve due to absence of social distancing and low testing, given the size of the population." The average growth forecast for fiscal 2021/22 is 6.9%, up 12.0 points from the projection for 2020/21, but it depends on the future course of COVID-19 infection. 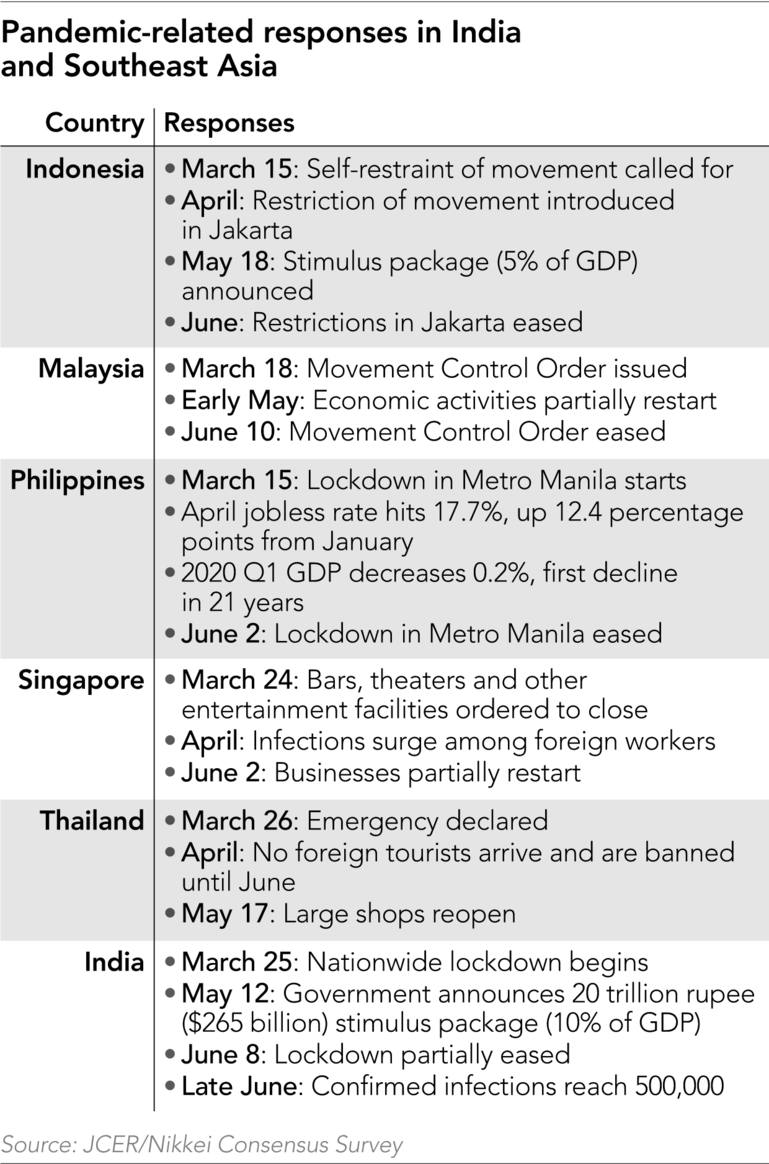 The survey asked economists about the medium to long-term changes in their economies and societies following the corona shock. Many responded that the digitization of business and people's lives would accelerate. "Business activities and personal lives will largely move around online platforms," said Carlo Asuncion of Union Bank of the Philippines. "The digital frontier has clearly taken a big leap and will remain the way forward," echoed Jyoti Vij of FICCI in India. Jonathan Ravelas of BDO Unibank in the Philippines warned of the possible increase in cyber attacks, citing "more attack space for hackers" as online activity such as teleworking increases.

Economists projected various possible changes in the global economic system. "Financial stability risks remain elevated," commented Sonal Varma of Nomura India. "I am worried about trend of de-globalization, [by] which each country would discourage imports from other countries so as to strengthen the revival of domestic manufacturing," remarked Amonthep Chawla of CIMB Thai Bank. The role of infrastructure was also in focus. "Singapore's infrastructure could have to be drastically re-oriented to take into account restricted connectivity," commented Randolph Tan of Singapore University of Social Sciences.

On the Thai economy, Naris Sathapholdeja of TMB Bank pointed out that "the tourism-dependent economy might need to shift." Alvin Ang of Ateneo de Manila University said on the Philippines economy that "reliance on overseas remittances will be less, but more on business process outsourcing." For the Indian economy, Dharmakirti Joshi of CRISIL stated: "The mass reverse migration induced by the lockdown could result in supply-side challenges for the economy over the medium run."

More details of the survey, including a full list of respondents, can be found on the JCER website.