Economists in Southeast Asia have lowered their growth projections as the U.S.-China trade war heats up and emerging markets face deepening turmoil, a new survey shows.

The 2018 growth forecast for the five biggest Association of Southeast Asian Nations economies -- Indonesia, Malaysia, the Philippines, Singapore and Thailand -- was cut by 0.1 of a percentage point to 4.9% in the latest quarterly survey by the Japan Center for Economic Research and Nikkei, versus the previous poll in June. This is the first downward revision for the ASEAN5 this year.

The impact of the trade war and market turbulence has been limited so far. But the surveyed economists are concerned that weaker exports will gradually take a toll. They also expect continuous downward pressure on currencies like the Indonesian rupiah, along with further interest rate increases across the region -- two factors that threaten growth.

JCER and Nikkei conducted the survey from Sept. 7 to 27, collecting 46 answers from economists and analysts in the ASEAN5 and India.

The weighted average growth forecast for the ASEAN5 in 2018 was reduced as the outlooks for Indonesia, Malaysia and the Philippines darkened. The 2018 forecast is lower than the 5.0% rate achieved in 2017; the 2019 forecast was also revised down by 0.2 of a point, to 4.8%. 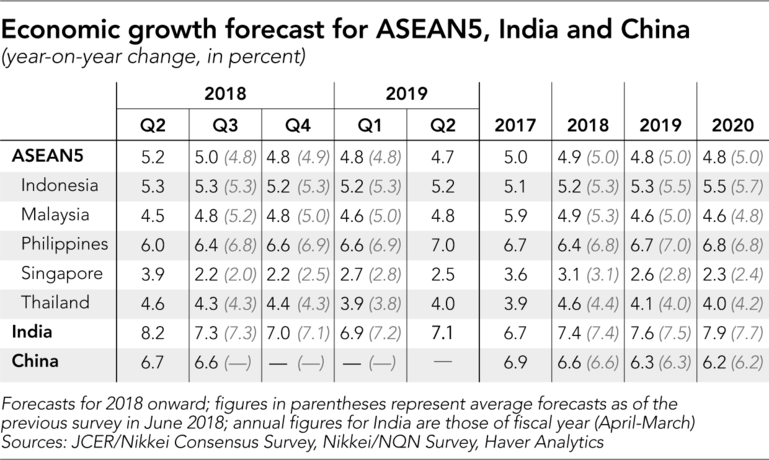 For now, Asian economies remain relatively steady despite the trade war and heavy pressure on emerging markets such as Argentina and Turkey. Wisnu Wardana of Bank Danamon Indonesia said that "there have not been any explicit effects from the trade war to the domestic economy."

Jonathan Ravelas of BDO Unibank, assessing the Philippine economy, said growth is "still being driven by private and government spending."

Economists are wary of the longer term, however. "The potential downside risks would heighten the longer the trade war continues," warned Randolph Tan of the Singapore University of Social Sciences.

"My main concern is slower export growth in 2019 due to a high inventory pileup for this year, in response to the threat of the trade war," said Amonthep Chawla of CIMB Thai Bank.

Of course, conditions differ from country to country within the ASEAN5. Thailand is expected to post brisk growth for 2018, supported by still-strong exports. Its 2018 forecast was revised upward by 0.2 of a point to 4.6%. The Philippines' growth projection for 2018 came to 6.4%, the highest among major ASEAN countries but 0.4 of a point lower than previously forecast. Inflation and a weaker peso are key concerns.

In Malaysia, the policies of Prime Minister Mahathir Mohamad are creating some headwinds. This includes the decision to abolish the goods and services tax in June and to reintroduce a sales and services tax in September, as well as plans to review infrastructure projects. The 2018 forecast was revised down by 0.4 of a point to 4.9%.

India's growth forecasts for fiscal 2018/19, which ends in March, remained unchanged at 7.4%. The country recorded 8.2% growth for April-June, the fastest pace in more than two years, though this was partly a correction from the previous year's low numbers, when the introduction of a new GST sowed confusion.

The currencies of Indonesia, the Philippines and India have all been depreciating sharply against the dollar. The rupiah, peso and rupee fell 3.6%, 1.4% and 5.8%, respectively, in July-September, and about 10%, 9% and 14% over a ninth-month period. Economists do not expect the pressure to abate before the end of the year. "With various external factors weighing down on the peso, it is expected to continue its downward trend," said Carlo Asuncion of Union Bank of the Philippines.

The central banks of Indonesia, the Philippines and India have repeatedly raised their policy rates this year to defend their currencies and maintain price stability. Some economists expect additional hikes in Indonesia and India before the year is over. Dharmakirti Joshi of CRISIL, an analytics unit of Standard & Poor's, commented on Indian monetary policy: "The Monetary Policy Committee can hike the repo rate one more time [in fiscal 2018/19] if upside risks to inflation materialize."

Higher rates are also expected in other countries including Thailand toward 2019.

Asked to identify the main risks facing their economies, respondents cited the "rise of protectionism" as the most serious matter for Malaysia, Singapore and Thailand. "Domestic currency depreciation" was the greatest risk facing Indonesia and India. "Inflation" was seen as the most significant danger in the Philippines.

Meanwhile, the IMF issued an update to its World Economic Outlook and is now predicting 3.7% global growth in 2018 and 2019. This is down from its July forecast of 3.9 percent growth for both years.

For more details of the survey, including a full list of respondents, please visit the JCER website.