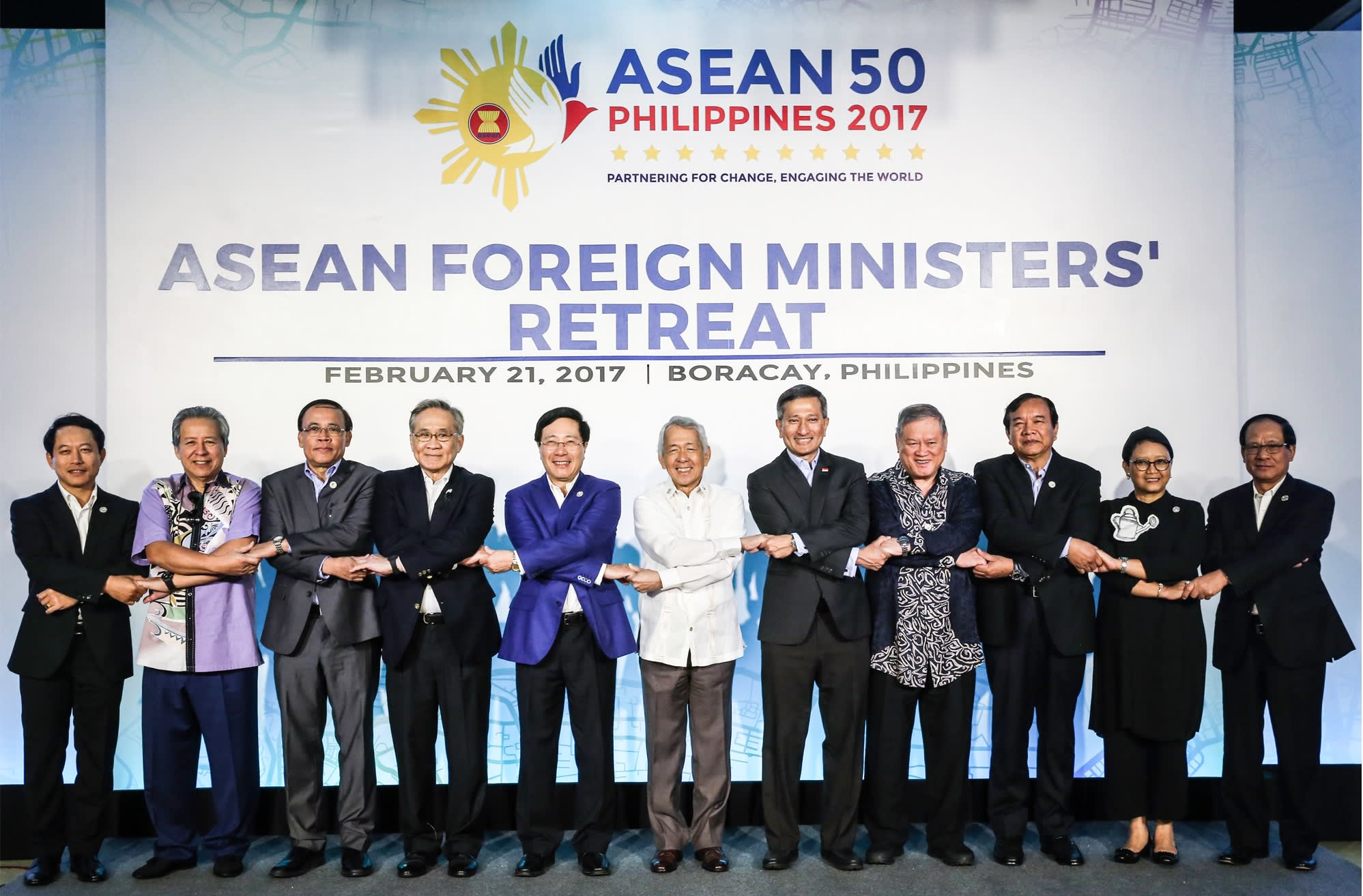 BORACAY ISLAND, Philippines -- The Association of Southeast Asian Nations hopes to strike a deal with China on a "framework" for a code of conduct in the South China Sea by the middle of this year, though some members of the regional grouping appear to be more enthusiastic about the idea than others.

"We are confident that this code of conduct, the framework, will be completed by the middle of this year or soon thereafter, simply [because] everyone, including ASEAN member states and China, is pushing hard for this," Philippine Foreign Secretary Perfecto Yasay told reporters on Tuesday.

Bloc members Brunei, Malaysia, Vietnam and the Philippines -- as well as China -- have overlapping claims in parts of the South China Sea, a strategic and resource-rich waterway through which some $5 trillion in trade passes annually.

In 2002, China and ASEAN, including non-claimant members Cambodia, Indonesia, Laos, Myanmar, Singapore and Thailand, signed the Declaration on the Conduct of Parties in the South China Sea. In doing so, they agreed to adopt a legally binding code of conduct to manage tensions and avoid conflict in the area, widely seen as a potential flashpoint.

Talks on the code of conduct, however, have continued for over a decade, and ASEAN diplomats have accused Beijing of dragging its feet. In recent years, China has built at least seven artificial islands in the South China Sea and installed military equipment on them.

Though Yasay expressed optimism about finalizing a framework for the code of conduct, perhaps not all ASEAN members share the same level of concern about the situation in the disputed waterway.

"On the South China Sea, a number of ministers expressed concern over recent developments and escalations of activities in the area, which may further raise tensions and erode trust and confidence in the region," Yasay said.

Non-claimant nations Cambodia and Laos, which receive considerable economic aid and investment from Beijing have been traditionally pro-China.

Not all ASEAN members are on the same page as well when it comes to the ruling last year by an international tribunal rejecting China's claims in the South China Sea.

Said Yasay, "There were two, three or four ministers that have expressed concern about the respect for the 2016 decision of the PCA (Permanent Court of Arbitration) ruling," he said, though he declined to provide names.

China refuses to recognize the ruling, which was initially filed for by the previous Philippine administration. Meanwhile, the new Philippine government under President Rodrigo Duterte has chosen to put the issue on the back burner.

Other issues discussed among the ministers included the election of U.S. President Donald Trump, who backed out of the U.S.-led Trans-Pacific Partnership trade agreement, which Brunei, Singapore and Malaysia are parties to.

"The ministers expressed their views on what they see as a still-evolving foreign policy in the U.S. under the Trump presidency," Yasay said without elaborating.

Some analysts see Trump's "America first" policy, which contrasts with former U.S. President Barack Obama's "pivot to Asia," as a sign that Washington is placing less importance on the South China Sea, which could give China an upper hand in the territorial disputes.

"RCEP not only can enhance the economies of ASEAN and its partners, but also serve as an example of a free and fair trade agreement," Indonesian Foreign Minister Retno Marsudi said.

The recent assassination in Kuala Lumpur of a man believed to be North Korean leader Kim Jong Un's brother was also briefly discussed at the retreat. Yasay said the Malaysian foreign minister is expected to share the results of the ongoing investigation with his ASEAN counterparts when it is completed. Yasay added that other foreign ministers expressed concern that similar incidents could happen within their borders.