Critics cite limitations, such as ability of nations to opt out of key provisions 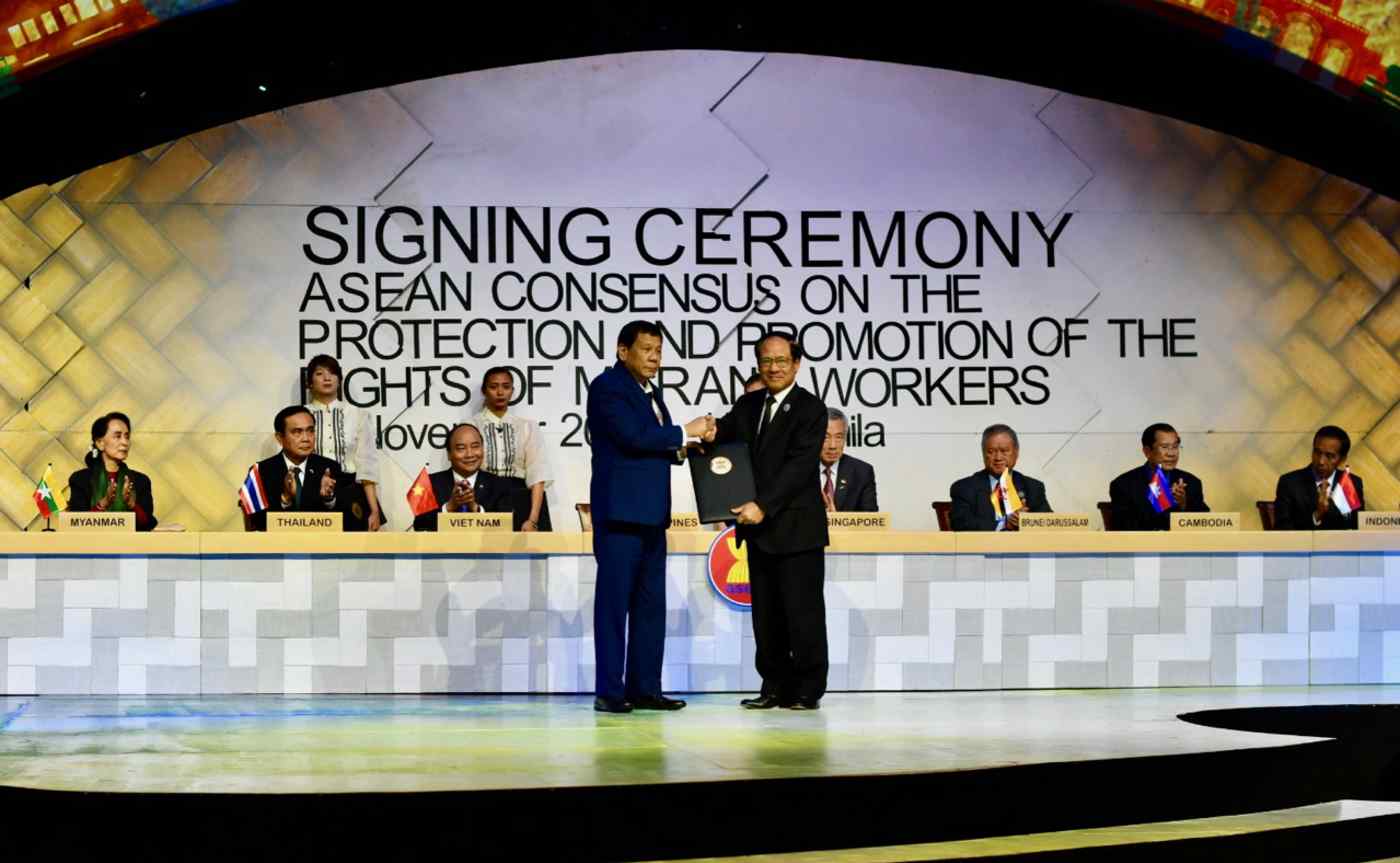 MANILA -- A deal aimed at protecting Southeast Asia's estimated 7 million migrant workers is flawed, as countries can opt out of key provisions, according to a group of parliamentarians from across the region.

Teddy Baguilat, a Philippine lawmaker and member of the ASEAN Parliamentarians for Human Rights, said Friday that the agreement affords "wide latitude to states to limit protections in accordance with domestic laws and policies."

The ASEAN Consensus on the Protection and Promotion of the Rights of Migrant Workers was meant as the pinnacle of the Philippines 2017 chairing of the Association of Southeast Asian Nations, which culminated in a lavish signing ceremony on Nov. 14.

President Rodrigo Duterte took plaudits for the deal before handing over leadership of ASEAN to Singapore Prime Minister Lee Hsien Loong. "I would like to thank the Philippines for its chairmanship achievements," Lee said, prompting wild cheers from an audience that included the Philippine cabinet and prominent lawmakers such as Senator Manny Pacquaio, the iconic multiple world boxing champion.

But despite the pomp and glamour, the circumscribed deal was widely expected. During drafting negotiations there were divisions between origin and destination countries -- where migrants sometimes live in legal limbo and are often arrested and deported. The latter group prefer to maintain the primacy of national laws.

Malaysia, Singapore and Thailand are magnets for 96% of migrants from Southeast Asia who choose to stay in the region, with Cambodia, Indonesia and Myanmar among the main origin countries. Millions more Indonesian, Philippine and Thai citizens have emigrated to Europe, North America and wealthy Gulf states such as the United Arab Emirates.

ASEAN has a history of agreements that do not contain any enforcement provisions, such as a 2009 human rights protection deal -- another precedent that prompted little surprise once the limits of the new migrant deal were confirmed.

However other, more recent ASEAN arrangements contain some legally-binding provisions, such a 2015 ASEAN agreement on addressing human trafficking.

"They should be able to do the same for migrant workers," said Eva Kusuma Sundari, a parliamentarian with the Indonesian Democratic Party of Struggle, the main backer of President Joko Widodo.

But despite falling short of the trafficking agreement, Sundari conceded that the migrant deal "demonstrates that ASEAN can be progressive" as it acknowledged "that workers can become undocumented through no fault of their own."

Moe Thuzar, lead researcher on ASEAN at the ISEAS-Yusof Ishak Institute, a Singapore think-tank, described the new migrant worker consensus as a compromise and a step forward.

"The fact that members are willing to agree to a document that hopefully will have some moral suasion for national/domestic implementation of regional commitments can be seen as a constructive step," she said.

The Mekong Migration Network, a group of organizations lobbying for migrant worker rights, criticized the legal limits of the deal, but praised its "moral principles" and said it hoped Singapore, as 2018 ASEAN chair, "will display progressive leadership in developing the follow-up action plan."