KUALA LUMPUR Expectations are growing that the ASEAN Economic Community will provide renewed growth for members of the Association of Southeast Asian Nations. The AEC will create a massive single market, with goods, money and people moving freely across borders -- at least in theory.

But ASEAN, whose 10 members boast a combined population of more than 600 million, is a loose alliance that maintains its internal diversity through a policy of nonintervention. The full launch of the integrated economic community, slated for Dec. 31, poses tough questions for the bloc.

"MOST IMPORTANT MOMENT" ASEAN leaders formally signed the AEC into existence on Nov. 22, during the East Asia Summit in Kuala Lumpur. Speaking at the signing ceremony, Malaysian Prime Minister Najib Razak said the "most important moment" for the 48-year-old bloc had arrived. 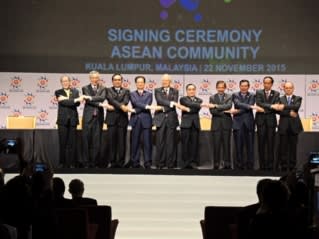 ASEAN leaders pose for a photo at the signing ceremony of the ASEAN Economic Community in Kuala Lumpur on Nov. 22, 2015.

But progress toward market integration has been slow, and ASEAN leaders remain divided over maritime security in the South China Sea, where Beijing is flexing its military muscle.

Established in 1967, ASEAN is a multiethnic, multireligious grouping whose members span diverse levels of economic development. Decisions must be made unanimously to avoid deep rifts and maintain unity.

Loose alliances often mean slow progress, and ASEAN is no exception. Members have already scrapped many of their tariffs on goods traded between them, but some countries have raised nontariff barriers, such as local procurement ratios. Indonesia recently introduced an anti-dumping duty on steel products.

The AEC aims to eliminate such barriers, but there is a gap between ideal and reality. The bloc's leaders have already given up on introducing the free movement of people and liberalization in the service sector at the time of the community's launch. Eight types of skilled workers, including architects and doctors, are already eligible for relaxed immigration rules, but no one has taken advantage of this change yet. And while the AEC stipulates that foreign companies will be allowed to own 70% or more of a local company in the service sector, some members have not agreed to this new rule.

Unlike the European Union, the AEC lacks the power to oblige its members to implement agreed-upon policies. The wide economic gaps among the members are one reason for the uneven efforts toward integration. Top-ranked Singapore's per capita gross domestic product is more than 50 times that of Cambodia, ASEAN's least-developed member.

The idea of forming a unified economic community has its roots in the 1997 Asian currency crisis and in the rising presence of China and India. To attract foreign investment, ASEAN has been stressing the economies of scale inherent in a single market and production base, but economic growth has, ironically, prompted members to enact protectionist policies.

"I am not seeing any signs on the horizon that [the situation] is going to change very rapidly," said Piyush Gupta, chief executive of Singapore-based DBS Group Holdings, the region's largest lender by assets. Little progress has been made in liberalizing the service sector, including finance, and freeing up the movement of people because less-developed members are wary that their more advanced peers will dominate the single market.

WAITING FOR RESULTS Prior to the signing ceremony, Najib told reporters that the AEC will make ASEAN manufacturing more globally competitive. He also said members will continue their efforts to create a closer community. To this end, the leaders adopted "ASEAN 2025," a roadmap for achieving greater trade and economic liberalization over the next decade. They also issued a communique after the summit that made it clear that the AEC is far from complete and that the bloc will keep working toward deeper integration.

Non-ASEAN states are also hoping to take advantage of the integrated market. Japanese businesses are the front-runner in reorganizing their production networks, and Western rivals are trying to catch up. Among South Korean players, Samsung Electronics and LG Electronics have started building large home appliance factories in Vietnam.

There is no doubt that competition to take advantage of the AEC will intensify. According to the Japan External Trade Organization, however, the percentage of Japanese companies generating a profit in ASEAN markets has been declining. These companies made an early entry, hoping to reap the benefits of market integration, but trade barriers remain high and the bloc has been unable to fully tap the potential of its massive market.

It is estimated that the combined GDP of ASEAN countries in 2015 will reach $2.5 trillion, surpassing that of India. With the Chinese economy losing steam, Southeast Asia is expected to serve as the driving force of the world economy, as well as to take a responsible stance on security matters. The time for espousing comforting remarks about building a "community" has passed. What ASEAN needs to do now is to deliver results.

Tamaki Kyozuka contributed to this report.