During a Jan. 20 meeting of the Council on Economic and Fiscal Policy, Abe (left) told members to study the effects of a corporate tax rate cut.

TOKYO -- Japan's Prime Minister Shinzo Abe has been intrigued by a taxation paradox that has been observed in Europe. Essentially, 15 major European countries have seen growth in corporate tax revenues despite cuts in corporate tax rates.

During a Jan. 20 meeting of the Council on Economic and Fiscal Policy, a Japanese government body, Abe told members to study the effects of a corporate tax rate cut, particularly which would have more impact -- lower tax revenues, or increased economic activity.

The prime minister wants to assess the idea that slashing the effective corporate tax rate -- the total tax load on companies divided by their profits -- would create a virtuous cycle that could charge up Japan's economic growth and drive up corporate profits, which would in turn boost tax revenue.

Abe has been warming to the idea of lowering the effective corporate tax rate to boost the international competitiveness of Japanese exporters and attract more foreign investment.

Higher than the rest

Reduced business taxes could also increase foreign direct investment in Japan. At 35.64% in fiscal 2014, the effective corporate tax rate for companies based in Tokyo is way above the 25-30% for other industrialized nations. 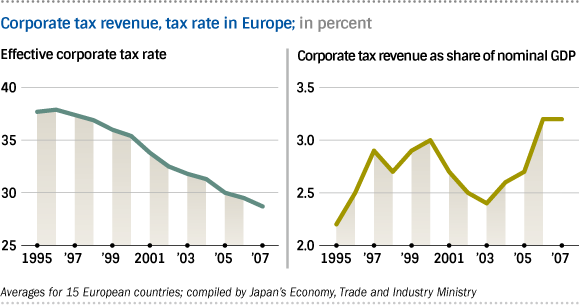 Shuichi Obata, a senior economist at Nomura Securities, says that Japanese companies will continue to shift production overseas if the rate stays so high, and that foreign companies will remain reluctant to expand their operations to Japan.

Lowering the effective corporate tax rate by 10% would raise the ratio of domestic production by Japanese makers by 1.5%, according to an estimate by the Daiwa Institute of Research.

The Cabinet Office has estimated that a 10% cut in the tax rate would push up Japan's gross domestic product by 0.4% in the first year of implementation, as companies shift assets for paying taxes into capital spending. This, the office says, would translate into higher wages and dividends and increased consumer spending.

The biggest question is what would happen to the government's tax receipts. In Europe, tax revenues in many countries have grown despite, or maybe because of, cuts in corporate tax rates.

During the 10-year period through 2007, effective corporate tax rates in 15 major European countries declined by some 10% on average.  During the same period, the ratio of corporate tax revenue to nominal GDP rose to 3.2% from 2.9%, according to data provided by Japan's Ministry of Economy, Trade and Industry.

Germany typifies this trend. According to the Organization for Economic Cooperation and Development, the total amount of corporate taxes collected by Germany's central and local governments rose by about 3.7 trillion yen ($35.6 billion) in those 10 years.

According to Shigeki Morinobu, professor of tax law at Chuo Law School in Tokyo, over those 10 years, there was a major increase in the number of new business launched in Europe because of the tax cuts.

In the U.S., corporate tax cuts implemented in the 1980s under President Ronald Reagan led to a massive budget deficit. But many also argue that those tax reductions set the stage for entrepreneurship to flourish in the country's information technology sector.

Corporate tax cuts would probably at the least give a boost to entrepreneurship and new business investment in Japan.

Abe's willingness to look into a tax rate change stands in sharp contrast with Deputy Prime Minister and Finance Minister Taro Aso's stance toward the issue. Aso is against any major tax cut that lacks a feasible plan to make up for the shortfall.