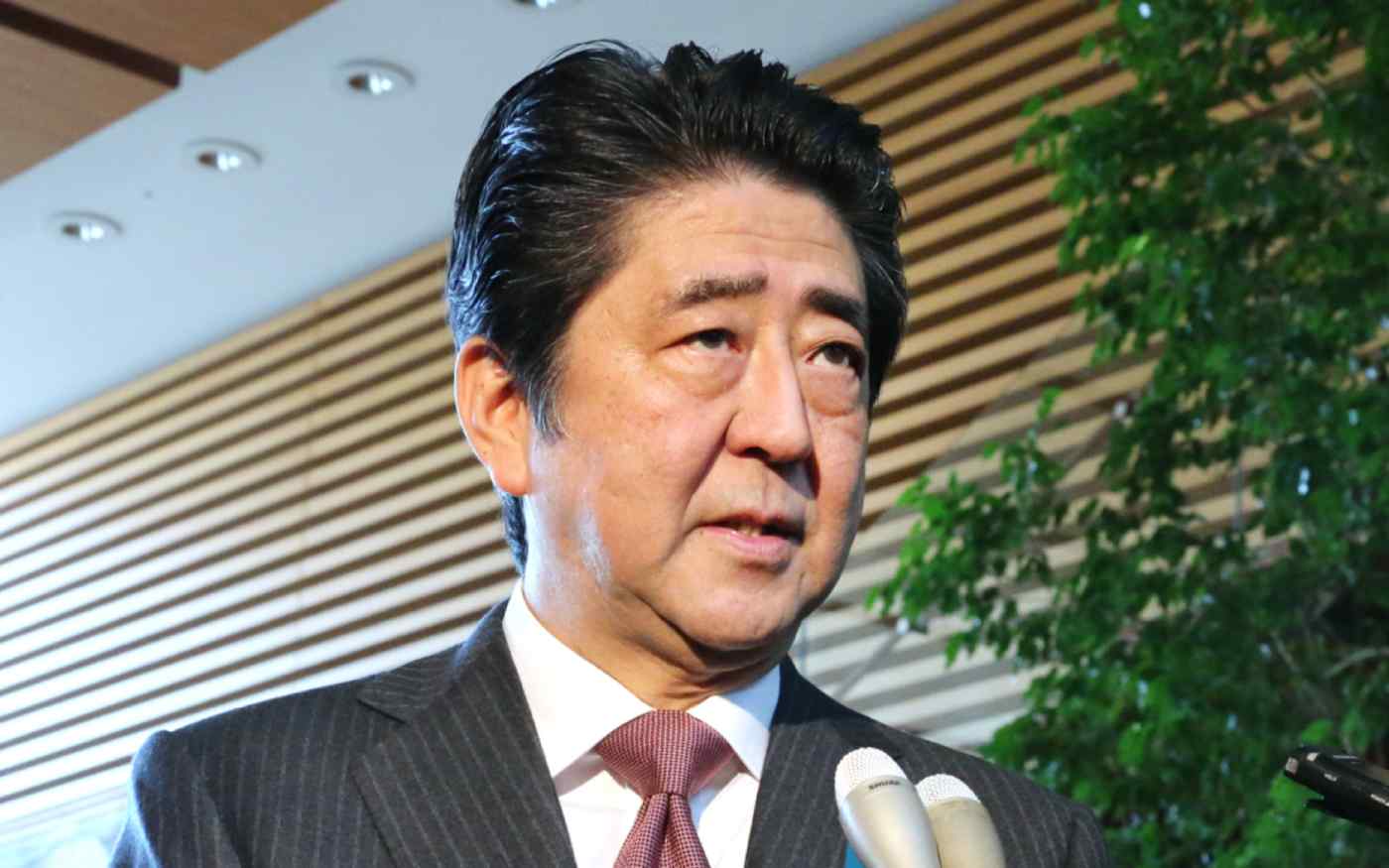 TOKYO -- If Japan was in far better economic shape, this month would have seen the consumption tax pushed up from 8% to 10%. But Prime Minister Shinzo Abe thought the timing was premature and decided in June last year to postpone the hike until October 2019.

Abe cited downside risks in the global economy as the reason for the delay. It was the second time he put the plan on hold, after scuttling the increase originally set for October 2015. But his concern was misplaced. Business sentiment is picking up among developed and developing economies for the first time in four years. Japan's unemployment rate is at a 22-year low, declining to 2.8% in February.

His decision to once again postpone a tax increase -- and thus temporarily spare the public a heavier burden -- was welcomed by voters. Abe's Liberal Democratic Party won a landslide victory in the subsequent upper house election in July 2016.

What happens twice will probably happen a third time, and speculation is growing that there will be yet another tax-hike delay. This deeply worries me. Because of the two postponements, Japan appears to have significantly backslid on its push to reform its fiscal and social security systems over the medium term -- efforts aimed at helping future generations. People seem to have fallen under the spell of Abenomics, the unusually long-serving prime minister's signature policy framework. That strategy comprises an array of short-term policies, and it is as if the people have become similarly shortsighted, giving little thought to what difficulties may lie down the road. The lack of a sense of urgency is quietly undermining Abenomics.

The 2017 New Year's message by the Japan Association of Corporate Executives, an influential business lobby known as Keizai Doyukai, spoke volumes about the prevailing mindset. While the message addressed many key subjects -- such as the need for structural reform, innovation in productivity, and expansion of free trade frameworks -- it was surprisingly short on details about fiscal issues; it merely offered a brief suggestion at the end that, "We must also stay on track to achieve economic growth and fiscal consolidation simultaneously."

For a group that, in 2015, called on Japan to raise the consumption tax rate to 17% in stages and slash social security spending by 500 billion yen ($4.51 billion) a year, it was an oddly weak message. Just last spring, the lobby group's chairman, Yoshimitsu Kobayashi, criticized Abe's decision to put off a rate hike as "a form of populism." When it was suggested that Keizai Doyukai's New Year's message was too timid, Kobayashi said: "[The government] won't listen to us anyway, so there's no use in repeating the same thing."

This "I give up" attitude can also be seen in the Finance Ministry and its Fiscal System Council. They have pointed critical fingers at the Bank of Japan's monetary easing policy, which aims to keep the country's benchmark long-term interest rate at around 0%. Loose monetary policy reduces the government's interest payments on its debt, "thereby creating an image that Japan's finances will not deteriorate despite mountains of government debt," one official said.

Japan's long-term debt is expected to reach 253% of gross domestic product this year, according to the International Monetary Fund. And it is looking increasingly unlikely that the government can make good on its promise to achieve a primary surplus by fiscal 2020, as Abenomics has not boosted tax revenue as much as expected.

Meanwhile, the Cabinet Office expects the country's debt-to-GDP ratio to steadily decline under the bullish assumption that the economy will continue growing at 2% annually in inflation-adjusted terms. This is one aspect of Abenomics that Abe and his ministers are more than happy to emphasize.

An American Nobel Prize-winning academic has suggested to Abe that Japan put a rate hike on ice until inflation speeds up to 2%. Given that one of Abe's policy brains supports this view, speculators increasingly believe a third postponement is in the cards.

But is that a smart idea?

There is nothing wrong with the overall aim of Abenomics, which is to stimulate the economy. Though still in its earliest stage, reform of working conditions has finally begun, such as capping maximum overtime and ensuring equal pay for equal work regardless of one's employment status.

Abe is good at touting short-term gains. He has drawn people's attention to policies aimed at breaking the so-called bedrock regulations, revitalizing local economies and promoting the "dynamic engagement of all citizens." But his government is woefully lacking in any will to push for longer-term structural reform, fearful of taking on extra risks.

The prime example here is social security reform. The government made some progress in the fiscal 2017 budget by raising the portion of nursing care expenses individuals must bear under their medical insurance, and by increasing medical treatment costs for senior citizens whose incomes are above a certain threshold. But there was no discussion about a drastic overhaul of the system.

Japan has surprisingly little time left to make crucial reforms. Three problems will all come to a head in 2020. The first is the growing pressure of an aging population. In the early 2020s, Japan's postwar baby boomers will all be 75 or older, driving medical costs exponentially higher.

The second is post-Olympic lethargy. After the 2020 Tokyo Olympics are over, the consumption and construction boom will end. If history is any guide -- and I dearly hope that is not in this case -- Greece began on a long path of economic stagnation after it hosted the 2004 Summer Olympics. 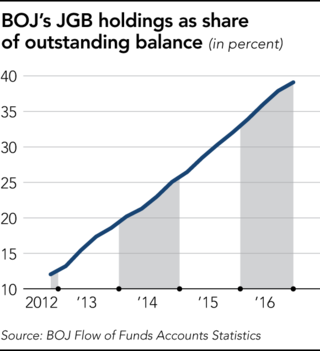 The third is that the BOJ will find it extremely difficult to "exit" from the ultraloose monetary policy it embarked on under the guidance of central bank Gov. Haruhiko Kuroda in 2013. The BOJ has since been gobbling up Japanese government bonds to the tune of 70-80 trillion yen annually and currently holds 40% of the outstanding balance. If interest rates rise in the U.S. and Europe on growth expectations and the upward pressure spreads to Japan, the BOJ will be forced to hoover up JGBs even more voraciously to keep its target rate near zero. "The bank is expected to reach its asset-buying capacity as early as this summer," the Japan Center for Economic Research predicted.

About 90% of treasury bills, excluding those held by the BOJ, are owned by foreign investors, and their holdings of medium-term JGBs are increasing. If JGBs are downgraded by two notches from the current A rating by Fitch Ratings, they will have the lowest investment-grade rating. Another tax hike delay and the BOJ hitting an impasse are counted among major causes that could trigger JGB selling by foreign investors.

Whether to go ahead with the sales tax hike as scheduled in October 2019 needs to be decided in 18 months, when the fiscal 2019 budget is to be compiled. Talks must start in the current fiscal year from April if the government wants to focus on serious discussions on social security reform without getting caught up in bickering over a possible tax hike. Measures to reform working conditions, which the government started pushing in earnest in early 2016, will come into effect in fiscal 2019. Delaying talks on a consumption tax hike will leave future generations with an even heavier burden.

A 2012 cross-party agreement on comprehensive social security and tax reform -- cut between the then-ruling Democratic Party of Japan (since renamed the Democratic Party), the now-ruling LDP and its junior coalition partner, Komeito -- has been frozen as a result of Abe's decisions to delay a tax hike. What lawmakers should be doing now is trying to work out even bolder social security reforms.

As the cherry blossoms make their annual appearance, Japan finds itself with a lukewarm economy and a parliament caught up in a debate over Abe's alleged connection to an ultranationalist school. The clock is ticking.