TOKYO -- Tokyo is reeling from a scandal involving skewed data that has upended official readings of the economy and cast doubt on a pillar of Prime Minister Shinzo Abe's economic program.

The labor ministry is required to collect data from all companies with 500 or more employees for its Monthly Labor Survey. But from 2004 to 2017, it surveyed only about one-third of these large businesses in Tokyo. Because large companies typically pay more than smaller ones, the undercounting dragged down wage estimates across the country.

The ministry has acknowledged that the faulty survey data cost 19.7 million people about 53.7 billion yen ($490 million) in unpaid benefits. That, plus updates to the ministry's computer systems to correct the problem, will raise the cost of the foul-up to about 79.5 billion yen.

The lapse prompted a broader investigation of Japan's 56 key economic statistics, which revealed that 40% of them contain errors. A group of specialists will examine all of the government's 233 data series.

The scandal has also raised questions about government economic assessments, undercut wage inflation expectations and left Abe vulnerable to criticism from rivals ahead of an election scheduled for this summer. It has also forced revisions to some of Japan's key economic data.

The Abe government is scrambling to clean up the mess. Earlier this month the cabinet added an extra 650 million yen to the budget for the next fiscal year to cover the cost of the blunder. Twenty-two officials, including Labor Minister Takumi Nemoto, were punished.

Chief Cabinet Secretary Yoshihide Suga apologized and said the labor ministry needs to consider measures to make sure there is no repeat of the mistake. 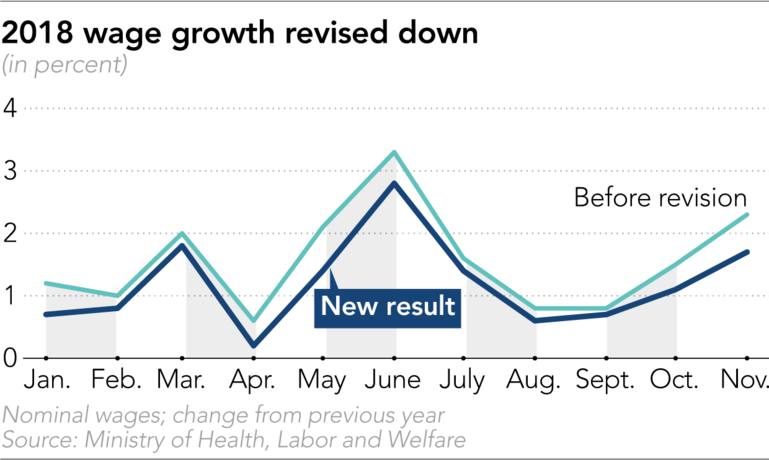 But deeper concerns linger. Officials corrected the survey methodology last year, meaning that wages appeared to jump significantly compared with 2017. With the revisions applied to previous years, however, last years' pay hikes were shown to be less dramatic.

Wage growth, a key part of meeting the Abe government's 2% inflation target, was revised down for the first 11 months of 2018. Before the data was corrected, pay in June 2018 was seen as having grown by 3.3% on the year; that figure was cut to 2.8%.

The change casts further doubt on the government's ability to meet its inflation goal. Policymakers have argued that wage hikes increase consumers' purchasing power and push prices up, but the downward revisions show that households have less disposable income than previously thought.

The Bank of Japan may also have to reconsider some of its indicators. The central bank uses the Monthly Labor Survey to calculate the output gap, a main gauge of inflationary pressure in the economy.

A spokesperson said the BOJ will look into the extent of the impact after seeing the results of the government's investigation.

"The reliability of Japanese statistics, especially of GDP and other important data, is quite low. That was true even before this scandal," said Masamichi Adachi, senior economist at JPMorgan Securities Japan. "That impression has intensified now."

Opposition politicians condemned the government's handling of the issue, with one lawmaker calling Abenomics, as the prime minister's reflationary economic policy is known, a fraud.

At a parliamentary hearing on Thursday that lasted more than nine hours, lawmakers from both the opposition and ruling coalition said the Ministry of Health, Labor and Welfare could not carry on with business as usual.

"This is a good chance for the government to recognize the importance of doing it better," said JPMorgan's Adachi. "I think it's important for the Japanese people to understand and trust the government's policies."