KABUL -- Afghanistan is known as the place where empires go to die. Foreign invaders -- from the British in the 19th century to the Soviet troops in the 1980s to the U.S.-led forces that entered nearly 13 years ago -- have suffered legendary defeats at the hands of tenacious local resistance and the unforgiving, mountainous terrain. 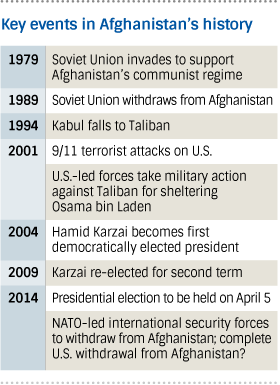 Today, on the eve of Afghanistan's first-ever democratic transfer of power, the war-weary country is finding that the path to becoming an independent nation is a struggle, not least because some of its superpower neighbors are, for once, reluctant to make their presence felt, at least in terms of investing in Afghanistan. The country is sitting on over $3 trillion worth of gold, gas, oil, minerals and other natural resources, according to U.S. estimates, with mining a key plank of the economic plans drawn up by the U.S. and NATO for Afghanistan post-2014, when most, if not all, foreign troops will be withdrawn.

But even China, with its rapacious hunger for resources, appears to be having second thoughts on investing in Afghan mines and infrastructure. The main reason: worsening security.

The March 20 attack on the Serena Hotel in Kabul, the capital, was a stark reminder of the Taliban's violent resistance and determination to undermine the April 5 election.

That evening, teenage gunmen killed nine civilians, including Sardar Ahmad, a journalist with Agence France-Presse, his wife and two of his children. His surviving infant son remains in critical condition.

Days later, the Taliban, which is boycotting the election and has warned Afghans against voting, stormed Kabul's election commission office and killed at least five people. According to the U.S.-funded National Democratic Institute, which has placed election observers throughout Afghanistan, this was just the latest in a series of attacks on individuals involved in presidential and provincial council election campaigns. Numerous people have been killed, and staff at provincial offices of Afghanistan's Independent Election Commission have been kidnapped. The NDI is pulling its foreign staff from Kabul following fresh violence in the city.

Attacks like these foment a sense of increasing danger, with countries such as China and Japan concerned that their workers will be unprotected after the local, freshly minted security forces take over the responsibility of making the country safe.

The crucial relationship between security and Afghanistan's economic survival is clear as foreign investors appear increasingly wary of undertaking large projects in the country, according to Mahmoud Saikal, economic and political adviser to Abdullah Abdullah, one of the front-runners in the presidential election.

Saikal said Mes Aynak, one of the world's largest copper deposits and located 40km from Kabul, is a "victim" of the situation. In 2007, a consortium led by China's state-owned China Metallurgical Group signed a $3 billion lease to mine Mes Aynak and put in the infrastructure to support it. But the company is now seeking to substantially reduce its investment because the price of copper has fallen and it fears for the safety of its workers.

Saikal said foreign contractors are frequently attacked by rocket-propelled grenades and that other major projects may be derailed for that reason.

Japanese engineers responsible for refurbishing Highway 1 -- the crucial ring road linking Afghanistan's major cities -- complain of being under threat when working near the southern city of Kandahar, and work has stalled indefinitely, said Saikal.

Similarly, the India-led reconstruction of the Salma Dam in Afghanistan's western province of Herat has been "taken hostage by insecurity," he said. Indian engineers regularly came under attack by the Taliban, according to Saikal, while the roads to the location were often deemed too dangerous to drive on because of roadside bombs, pushing back construction deadlines and leading to subsequent cost blowouts.

A consortium led by the Steel Authority of India is also renegotiating a multibillion-dollar iron ore project in the province of Bamiyan, where insurgency attacks have been on the rise.

Memories are still fresh of the 2009 election, which was rife with vote rigging, ballot stuffing and intimidation, and ultimately saw incumbent President Hamid Karzai re-elected. Fabrizio Foschini, a political analyst at the Kabul-based Afghanistan Analysts Network, said it was hard to predict whether the presidential election will worsen the security situation.

"If there is an impression among the public that there have been irregularities in how the election result is reached, that will of course impact the legitimacy of the future government," Foschini said. "But in the short term, the major concerns are not so much the public perception as the fear that one or more of the (presidential) candidates will protest the result." That would bring violence or unrest that will further unravel the stability of the country, he added.

But the election offers hope for some respite when it comes to the presence of foreign troops. All major candidates standing in the April election have said they will sign a new bilateral security agreement with the U.S., which is required to ensure a small but ongoing presence of international military forces in Afghanistan after 2014. Outgoing President Karzai, whose relationship with Washington has deteriorated, refuses to sign it, and the U.S. is threatening a full withdrawal of its troops when NATO's security mandate expires on Dec. 31.

Lais Shuja, a 30-year-old businessman in Kabul, said a new security accord would make a real difference to how locals feel about the future of the country. Ordinary Afghans have slashed their spending, with even a box of tissues regarded as a "luxury item," he said. The reason is that people feel their lives are even less secure than before.

"People are keeping all the cash they can and not spending it except on the most basic needs," Shuja said. "They feel that if the BSA is not signed then we will go back to square one (when the Soviets retreated and the country fell into civil war)."

As the member of a family with a large, successful construction business, Shuja was targeted in an unsuccessful kidnapping attempt last year. He managed to escape with two bullet wounds after his captors fired 14 rounds at him as he ran for his life. Like many others, however, he has chosen to stay in Afghanistan and help rebuild his homeland.

The Afghan electoral office does not expect to announce the presidential winner until June, leaving little time for the U.S. to reorganize its military strategy before the pullout deadline. But Saikal, the political adviser, said signing the security agreement should be one of the first acts of the president-elect. Then, he said, the new leader can start tackling the nation's myriad problems, including the economy.

"In the past 12 years we have had a bubble economy pumped up by war expenses, foreign aid and the (illegal) drug economy," said Saikal. With foreign aid drying up and national revenue only around $2.3 billion a year, the government is under pressure to find at least another $10 billion to support its ongoing expenses -- not least of all for its 352,000-strong security force.

Statistics for economic growth are equally dismal. Afghanistan's growth has averaged about 9% for the past 12 years. In 2012, the World Bank estimated a figure of 14.4%. But for the year ahead it has projected a plunge to 3.5%.

Meanwhile, unemployment is massive. There is little agreement on what Afghanistan's precise unemployment rate is, but the Afghanistan Chamber of Commerce puts it at 40%, the World Bank measures it at 56% and Afghanistan's labor leaders put it at a shocking 86%.

"The unemployment problem is huge, and it is getting worse with the foreign withdrawal," Saikal said. "Tens of thousands of Afghans were employed by the foreign armies and organizations. Plus, investors don't have confidence anymore so business is also disappearing."

Shuja and many business owners back Ashraf Ghani Ahmadzai, the former finance minister, who is running on a pro-business platform in a crowded election with nine candidates. He pledged in early March in a live televised debate among the three presidential front-runners to sign the security agreement "in his first week in office." He is currently No. 2 in the polls behind Abdullah, an eye surgeon who was the runner-up in 2009 and stridently anti-Taliban in the past.

President Karzai, who has led the country since December 2001, is not allowed to run for another term. He has not officially endorsed any of the candidates, but he is understood to be privately backing former Foreign Minister Zalmai Rassoul, who is trailing in the polls.

However, Karzai's legacy will be felt for some time after he has stepped down. His increasingly combative stance against the U.S. and NATO's military presence in recent years has been off-putting to international allies and donors alike. The three presidential front-runners agreed on one thing in their March debate: The next president must repair the confidence lost in the Afghan government.

"We have come a long way when you compare it to where we were 12 years ago," Saikal said. "Still, the task ahead of us is not easy. And without the support of the international community, it will be impossible."

Despite the cynicism that pervades Kabul, there is a sense that Afghanistan is moving forward with a historic transfer of power and steady gains made in the past 13 years across education, infrastructure and government structure.

"I'm hopeful, and at the same time a little worried," said Shuja. "We are all waiting now for the outcome of this election."