African swine fever has Chinese pork industry in a sweat TOKYO -- China is fighting an uphill battle against deadly and highly contagious African swine fever, which is threatening the domestic pork industry in the world's largest market for the meat.

Despite all-out efforts by the government to contain the disease, which started more than three months ago, the fever has spread, with possibly dire consequences for China's agriculture and economy as a whole.

The crisis took another troubling turn last Friday, when the country confirmed the first case in a wild boar, raising the difficulty of containment. Authorities also confirmed that the outbreak has spread to the southwestern province of Sichuan, the top pig-raising region.

China's first case of African swine fever was reported in early August on a farm in Shenyang, in the northeastern province of Liaoning, where 47 pigs were confirmed to have died from the disease. The initial claim by the Ministry of Agriculture and Rural Affairs that the outbreak had been controlled has since proved to be wrong.

African swine fever is nearly always fatal to pigs but does not affect humans. It was once confined mainly to Africa but started spreading to other regions about a decade ago. There is no vaccine, nor is there any effective treatment, limiting the options for controlling the disease.

Since pork is a vital food staple in China, the virus could have a serious effect on eating habits. Chinese Premier Li Keqiang convened an executive meeting of the State Council on Sept. 26 and ordered that every possible effort be made to prevent the spread of the virus.

But Beijing does not seem to be winning the fight. The disease has also spread to the provinces of Heilongjiang, Henan, Anhui, Jiangsu, Zhejiang and Shanxi, as well as the Inner Mongolian Autonomous Region. The disease was found in a dead wild boar in Jilin Province, according to the ministry.

On Oct. 16, Vice Agriculture Minister Yu Kangzhen called for greater efforts to contain the contagion in a meeting held to deal with the threat in the Liaoning Province city of Jinzhou. While noting that measures taken so far are "powerful and effective," Yu stressed that more needs to be done. 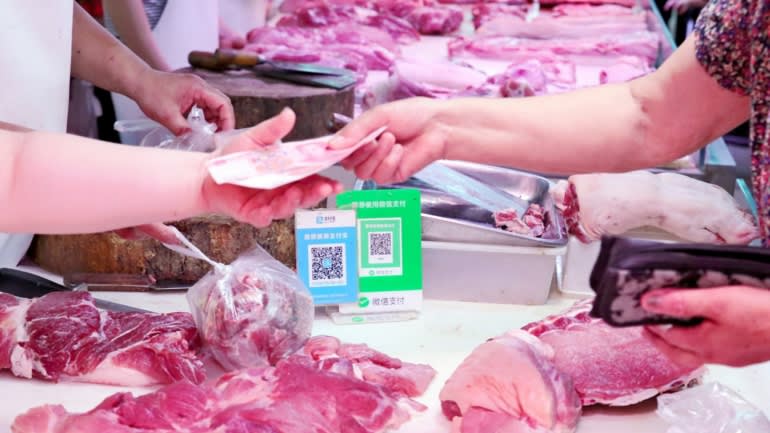 The government is scrambling to spare China's pork loving population from the effects of the spreading swine fever.   © Reuters

Pork prices regularly fluctuate in China in what is known as the "pig cycle." This happens because much pork comes from small farmers who do not have the means to track market trends and adapt when things turn rough, according to Ruan Wei, research counselor at Norinchukin Research Institute.

Small pork farmers ramp up production when prices rise without knowing the overall market picture, thereby causing oversupply and a decline in prices, which in turn forces financially weak operations to close.

This is not a problem in countries where pork is mostly produced by large pig farms. Also, China does not import much pork, relying mainly on domestic production, which makes pork prices more vulnerable to supply fluctuations.

Observers are now wondering how the fever will affect the industry. Ruan suggested the outbreak could be a blessing in disguise. She predicts it will trigger consolidation in the industry, weeding out inefficient small farmers and leaving only large players.

After authorities restricted the transport of live hogs and pig products from affected areas, local prices have plunged, a situation that will likely force many small farms to close.

The government is promoting efforts to establish large pork producers capable of clean and efficient operations. The drive is likely to result in a wider and better temperature-controlled supply chain.

Chinese would be hard hit in the short term if the government fails to control the outbreak. From the long-term perspective, however, the situation could be a boon to the market by eliminating the pig cycle that has been a bane for the industry and a curse for consumers.