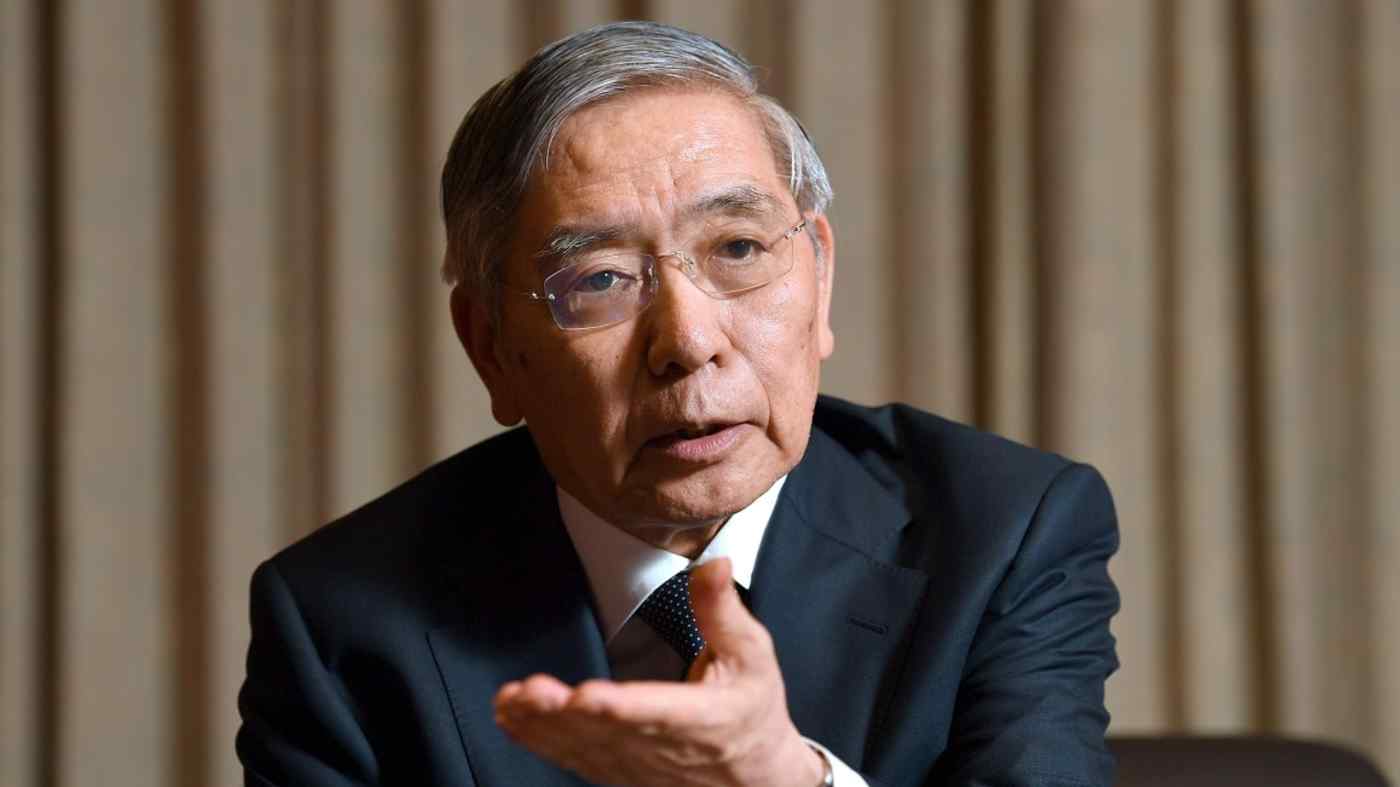 TOKYO -- Even after two decades of aggressive monetary easing, Japanese people have not been able to shake off their deflationary mindset, Bank of Japan Gov. Haruhiko Kuroda told Nikkei, pledging to stay the course until inflation stabilizes at 2%.

While central banks in the U.S. and Europe start to consider tightening as fears of excessive inflation creep in, price growth in Japan has remained stubbornly weak and the economy lukewarm.

"Past deflation is still affecting people's mindsets," Kuroda said, admitting that he "had to acknowledge that spurring inflation has taken longer than hoped." But the governor defended his policy, saying it "did create non-deflationary conditions."

Kuroda, who is set to become the BOJ's longest-serving governor this month, vowed to achieve 2% inflation within about two years after assuming his post in the spring of 2013.

He embarked on massive purchases of government bonds and other assets to that end. Price growth, previously mired in negative territory, jumped to the mid-1% range in about a year, but lost steam thereafter, and fell back below zero last year amid the coronavirus pandemic.

Over his eight and a half years as governor, Kuroda has mobilized every tool in the BOJ's policy toolkit, including negative interest rates and forward guidance for long-term rates. Yet the 2% target has remained elusive.

According to the BOJ, price growth has stayed in positive territory excluding extraordinary factors such as government-driven cuts to wireless rates. Its policy assessment in March estimated that real gross domestic product is 0.9% to 1.3% higher, and inflation 0.6 to 0.7 percentage point higher, than they would have been without qualitative and quantitative easing.

The actions of businesses and households "tend to be driven by past deflationary conditions," Kuroda said. If this fixed view of stagnant prices can be changed, the 2% inflation target can be achieved, he argued.

But the real problem is that Japan still lacks an environment to enable such sustained price growth. Over the past 20 years, average nominal wages have grown about 80% in the U.S. and roughly 50% in Germany and France, but declined 5% in Japan, according to the Organization for Economic Cooperation and Development.

Without higher pay, consumers will not spend more. Businesses with stagnant sales are reluctant to raise worker pay, and may even cut prices to stoke demand, feeding a vicious cycle of slow growth and low inflation.

The government's structural reform efforts and growth strategies have done little to boost Japan's economic potential. The potential growth rate has remained below 1% for the past two decades and sits around 0.5% now, compared with 1.8% in the U.S. and 0.8% for the eurozone.

"It will take time for structural reform to show results," Kuroda said. He urged the government to keep pushing these measures where necessary.

Kuroda, who previously worked on currency policy for the Finance Ministry, sought to use monetary easing to correct the yen's excessive strength, seen as a drag on the economy. And the currency has softened significantly, from less than 90 yen to the dollar to around 110 yen now.

Yet the fact that net exports have actually weighed down real growth in each of the three years through fiscal 2020 has raised questions about the assumption that a softer yen is a boon.

The usual mechanism of a weaker yen boosting export volumes and thereby growth "has weakened" as companies have moved production offshore, Kuroda said. But he also pointed out that a weak yen "increases the yen-denominated earnings of companies operating abroad," encouraging boosts to wages and capital spending.

The BOJ's balance sheet has ballooned to 130% of GDP, from around 30% before Kuroda. This compares to roughly 30% at the Federal Reserve and 60% for the European Central Bank, a gap that would widen further if these authorities start to normalize monetary policy.

Years of ultraloose policy have had a range of side effects. Households' total net interest income plunged to 6 trillion yen in 2001, when quantitative easing was introduced, from more than 10 trillion yen in the late 1990s, and is now hovering at around 5 trillion yen ($46 billion).

Low rates have eaten away at banks' financial health. Regional banks' net interest income was down more than 10% in fiscal 2020 from pre-Kuroda levels, according to the Financial Services Agency. And the BOJ's ownership of nearly half of all Japanese government debt has disrupted that market.

Kuroda argues that the benefits have outweighed the drawbacks."Economic improvement caused by easing have had a positive impact on financial institutions' profits and the better employment situation also helped household incomes improve from when they were without easing," he said.

Asked when the BOJ might start tapering itself, the governor said only that "we will continue strong easing and make every effort to achieve the 2% target."