JAKARTA -- Indonesia's surprise decision on the evening of Jan. 12, after the markets closed, to ease its mineral export ban sent ripples through Asia's nickel industry. Shares of nickel producers in the region plummeted the day after the announcement on fears of a sudden supply surge. One company, though, stood out in the crowd. Indonesian state miner Aneka Tambang saw its shares jump 6%. That was because the government decided to allow exports of low-grade nickel ore - defined as ore containing less than 1.7% nickel to resume -- raising hopes that Antam, as the company is better known, can reap benefits from the decision.

"We welcome [the new policy], notably as it allows the export of potentially mined low grade nickel ore which is yet to be used or processed domestically," Antam President Tedy Badrujaman said in a press statement. 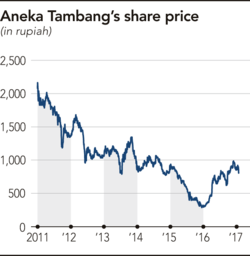 But the boost turned out to be short-lived. Antam's share price has since failed to maintain momentum and dropped 6.9% on Jan. 24 to 805 rupiah ($0.06) -- lower than in the days before the announcement -- where its closing price remained on Jan. 27.

The oversupply concerns have also dampened the company's sales outlook. Last September, Badrujaman said Antam could resume exports of up to 20 million wet metric tons (wmt) of ore in 2017 if the ban was lifted. It exported nearly 10 million wmt of ore in 2013. Now it is not likely Antam can export that much. Nickel is an essential element in the production of stainless steel, which has a wide range of uses, including in home appliances, auto components and medical equipment.

Indonesia was the world's largest producer of nickel until the government imposed a raw mineral export ban in January 2014 in an effort to force mining companies to build more local downstream production facilities to generate increased revenue. The government said heavy reliance on raw commodity exports did not contribute to long-term economic growth.

The mining industry, in which nickel was one of the main commodities, contributed to 18% of Indonesia's total exports in 2013, according to PwC, the international consultancy. That contribution shrank to 14% in 2014-15.

Indonesia's mining industry has been dominated by foreign companies. U.S.-based Freeport-McMoRan, which operates the world's third largest copper mine in Indonesia's Papua province, is one of the country's largest taxpayers. In comparison, Antam, established in 1968, as well as other state-owned miners such as coal producer Bukit Asam, are much smaller. In 2013, Antam paid a mere 917 billion rupiah in tax and dividends, according to its financial statement. The government has a 65% stake in Antam. Jakarta's intention to ban nickel exports was not only to push the state-owned company to become a main enabler of developing value-added minerals industry. It wanted to increase revenue by bolstering Antam's profitability in the long run.

The government's vision is in line with Antam's strategy. The company aims to expand to downstream business and eventually wants to build its own stainless steel factory. However, the interests of Antam and the government started to collide as the commodity's cycle entered a steep downtrend in the second half of 2014, not long after the export ban came into effect. While the regulations governing the export ban allowed foreign miners like Freeport to continue to ship concentrate minerals overseas, Antam, whose contribution to state coffers was minimal, did not receive any preferential treatment. When the ban took effect, Indonesia's domestic smelter capacity was underdeveloped. Unable to either export or sell its products to local smelters, Antam swung to a net loss of 743 billion rupiah in 2014, which ballooned the next year after nickel prices plunged amid a slowdown in the Chinese economy. Antam's stock price hit an 11-year low of 287 rupiah in late 2015. Nickel prices bottomed out in the first half of 2016, after which they rose as demand from China rebounded, and after the Philippines threatened to suspend operations of 18 nickel mines that account for more than half of the country's production capacity citing environmental concerns. Manila swiftly moved to crackdown on local industry after President Rodrigo Duterte came into power in June 2016.

Antam's first nine months of 2016 saw the company return to profit, but the 38 billion rupiah booked is a far cry from 409 billion rupiah made in 2013.

Generating cash flow has become even more crucial for Antam and the government, not least in order to finance smelter projects and to protect the state budget. Based on a realistic outlook for commodity prices, the government took additional measures. In 2015, while holding the ban on nickel ore exports, the government injected 3.5 trillion rupiah in Antam to fund the company's fourth ferronickel smelter in North Maluku province, which will need another 3.3 trillion rupiah in planned investment. Last year, Antam signed an agreement with two German companies,  Ferrostaal and Cronimet Holding, to develop a nickel pig iron smelter estimated to cost $800 million.

Meanwhile, Antam is sticking by its ambition to build its own stainless steel factory. According to Trenggono Sutioso, the company's senior vice president and corporate secretary, the business will be economically sustainable once Antam's ferronickel output reaches 40,000 tons -- double its production in 2016. The company aims to achieve this by 2019, when Indonesian President Joko Widodo ends his first term.

"Had we had the funds, we could immediately build the whole factory right now," Badrujaman told local reporters in December. "But that is not the case. We need good cash flow so that banks will be willing to grant loans. Building this refinery facility is very expensive." On Jan. 12, the Indonesian government made its latest move to reverse the export ban on low-grade nickel ore, as well as washed bauxite, after three years from its imposition. The government is likely to see a backlash against this decision. Foreign companies with interest in Indonesian nickel sector may be also significantly affected by Jakarta's sudden decision. They are stepping up the pressure on the Indonesian government in criticizing the policy shift. Some Chinese nickel smelter companies, which have heavily invested in Indonesia's smelter industry over the past few years, are considering taking the government to court. The Chinese were quick to build the smelters after they learned they were no longer able to import Indonesian ore. Of the $20 billion invested in Indonesia over the past few years for the development of around 30 smelters, two-thirds come from China. Meanwhile, Freeport, which has been forced to halt copper concentrate exports since the decision, recently told analysts that it may seek international arbitration if it fails to negotiate a deal.

Despite the easing of the export ban, it is not immediately clear whether the new regulations will significantly help Antam and local peers. The new rules feature a set of requirements, including that miners have to use 30% of their smelting capacity for low-grade ore processing before they can ship the excess overseas. It has been widely reported that Antam had requested the government to allow the industry to export low-grade nickel ore. Sutioso, the company's senior vice president, said that while Antam's existing smelters can process low-grade ore, it is not economically feasible. At best, profit margins will be small.

Three-month nickel futures on the London Metal Exchange have dropped 5% since Jan. 11, the lowest levels in seven months. With pressure on prices, it also remains unclear how much the government will allow miners to export this year after relaxing the ban. Price concerns may lead to shipment quota. A decision over the matter is expected to come out next month.

"We're still awaiting guidelines from the government concerning the export quota," Badrujaman told the Nikkei Asian Review on Jan. 25. "Only then that we will be able to calculate... how much we should produce and export." Andrew Franklin Hotama, an analyst with Bahana Securities, estimates that Antam can export 1 million wmt of ore and generate roughly 300 billion rupiah in additional revenue - only 3% of Antam's 2015 sales.

Among mining industry and investors, there is growing concern over the fickle nature of some Indonesian government policies, which could affect the rest of the world. Some believe the Indonesian government is putting on hold its pursuit of long-term downstream production goals for short-term gains. "[The relaxed ban] is a clear indication of how serious the Indonesian government's current fiscal position is, and the increasingly short-term nature of the government's objectives now that it is halfway through its term in office and the next presidential election must be held in 2019," said Bill Sullivan of Indonesian law firm Christian Teo & Partners. Worse, the government's flagship tax amnesty policy launched last year has so far failed to bring back money stashed overseas to finance Widodo's ambitious infrastructure push.

Energy and Mineral Resources Minister Ignasius Jonan said on Jan. 24 the government is committed to its long-term vision, and that resuming ore exports will help finance expansion of domestic smelter capacity. However, changeable mining policies seen over the past few years may keep weighing on Indonesian industry's growth prospects.

Antam's gains - or pains - will gauge how committed the government really is to building downstream industry. However, at the end of the day, Antam has to assume responsibility to raise the funds regardless of the direction of the commodity cycle as well as the government's policies.

Nikkei staff writers Wataru Suzuki in Jakarta and Cliff Venzon in Manila contributed to the story.