BANGKOK -- In the 20 years since the Asian currency crisis of 1997, the region's companies have generally done well. They recovered from that setback and shrugged off the global financial crisis triggered by the U.S. housing meltdown a decade later, thanks in large part to strong growth in China. 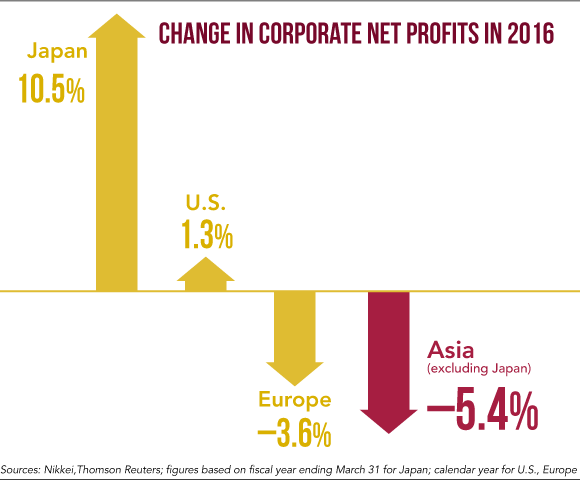 Things are looking less rosy of late. China's economy has slowed, pushing commodity prices lower and eroding the profitability and growth of big Asian companies. As a whole, they are forecast to post smaller profits for the second straight year in fiscal 2016, the first time that has happened since the currency crisis.

Nearly half the 122 companies in the Nikkei Asia300 Index that had announced their fiscal 2016 results as of the end of February have seen their profits shrink or have fallen into the red, putting their resilience to the test. This year's outlook is considerably brighter, with market watchers predicting a strong upturn in corporate profits, but who will thrive and who will continue to flounder in today's more challenging environment remains a mystery.

Taiwan Semiconductor Manufacturing Co. (TSMC), an Asian tech leader, announced on Feb. 23 that it plans to start test production of cutting-edge 5-nanometer chips in the first half of 2019. Speaking to suppliers in the northern Taiwanese city of Hsinchu, where TSMC has plants, co-chief executive Mark Liu said the company will spend more of its money developing advanced technology. 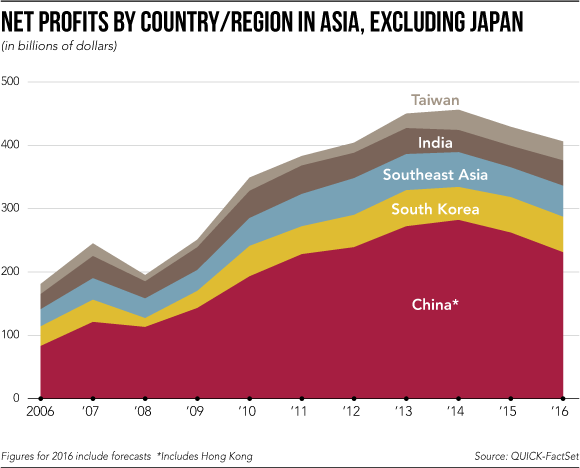 But TSMC is an exception. The Nikkei Asian Review has compiled the actual and forecast net profits of 254 out of the 327 companies comprising the Asia300 for which comparable data is available. Their combined net profit comes to $409.6 billion, based on average exchange rates during the fiscal year. That is down 5% from the previous fiscal year, when they posted a 6% decline.

"It is quite surprising, as Asia is the fastest-growing region in the world. If you look at earnings for the past five or six years, they have hardly grown," said Suresh Tantia, an investment strategist for Asia-Pacific equities at Credit Suisse.

By contrast, the earnings of big Japanese and U.S. companies have improved. The Nikkei estimates the net profit of about 1,500 major Japanese companies will climb around 11% in fiscal 2016. The constituents of the S&P 500 stock index in the U.S. will see their profits grow by around 1%.

The chips are down

The slowdown in China has hit the country's domestically focused businesses hardest. Sixty-four companies based in mainland China and Hong Kong saw their profit shrink by 12%, or a combined $31.3 billion, with most of that figure coming from forecasts. Their counterparts in Indonesia, Thailand, Malaysia and India see profits rise, on balance, but they are too small to make up for China's much bigger decline.

China's slower growth is not the only headwind. Tantia points to falling crude oil prices as another challenge. Crude prices were around $100 a barrel in the summer of 2014, but then began sliding, hitting around $30 at one point. "That sharp fall led to a very substantial earnings downgrade in the energy sector and the entire value chain." 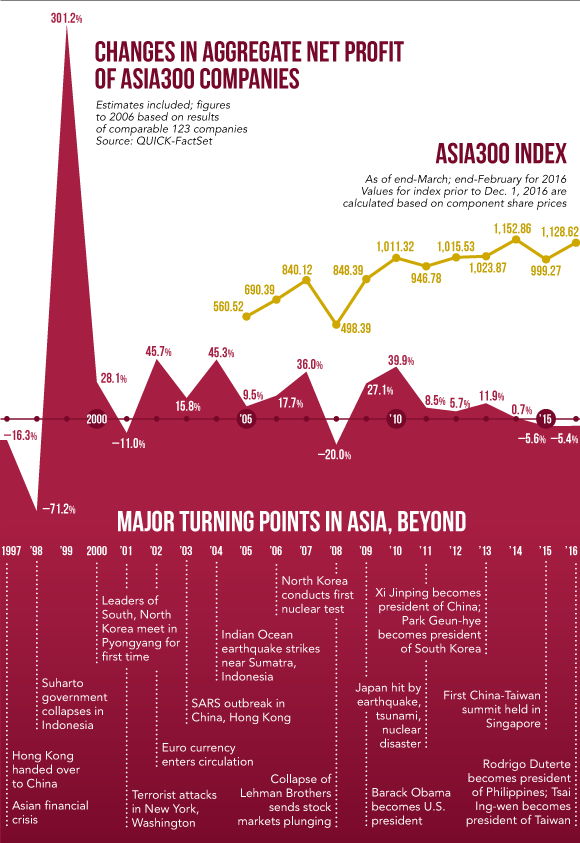 PetroChina, one of the largest listed companies in Asia, illustrates the challenge. The company said on Jan. 25 that it expects its net profit for 2016 to drop 70-80% from the previous year. On Feb. 23, its listed subsidiary Kunlun Energy announced a possible impairment loss of 3 billion yuan to 4 billion yuan ($435 million to $580 million, at the March 8 exchange rate) in its natural gas distribution business.

But there are bright spots and TSMC is undoubtedly one. The Taiwanese company's earnings are underpinned by superior technology and competitive prowess that have made it the sole supplier of core processor chips for Apple's iPhone, and the dominant provider of baseband chips designed by Qualcomm and Intel. The chipmaker is expected to maintain its lock on the iPhone's core processors this year.

South Korea's Samsung Electronics is another enduring success story. In October, it killed off the Galaxy Note 7 smartphone after the top-tier model proved fire-prone. Still, its net profit grew by 20% on the year. Samsung has the top share in the global NAND flash memory market. Its semiconductor sales climbed 8% to 51.2 trillion won ($42.4 billion), helping offset a 3% decline in its mobile business.

MediaTek, another Taiwanese chipmaker, looks like TSMC's poor relation. Although the company posted record revenue of NT$275.51 billion in 2016, thanks to robust sales to Chinese customers Oppo, Vivo and Huawei, its net income slipped 9% to NT$23.7 billion last year due to ferocious competition with Qualcomm. MediaTek's gross margin for the October-December quarter dropped to 34.5%, from 38.5% a year earlier.

There are winners and losers in the auto industry as well. Brisk domestic sales helped Astra International, a conglomerate that is Indonesia's largest car seller, log a 5% gain in net profit in 2016. Its auto sales rose 16% to 591,000 units -- more than triple the industry growth rate of 5% -- thanks to new models from Japanese automakers Toyota Motor and Daihatsu Motor. Their brands are strong in an Indonesian market that expanded for the first time in three years.

For South Korean automakers, 2016 was not a banner year. Hyundai Motor, the country's largest automaker, had a net profit of 5.4 trillion won, sliding 16% from the previous year. "Low growth in the auto market, as well as tough competition among players, weighed on sales," said Hyundai in a statement in January.

One of the reasons for the weaker profits is lackluster performance in the U.S., the world's second-largest market. Hyundai Motor Group's unit sales, including those of Kia Motors, grew 2.5% on the year in the U.S., but that was less than the growth at Honda Motor and Nissan Motor. Its sophisticated designs used to capture the hearts of American drivers, but they have lost their edge as Japanese rivals rolled back. Hyundai Motor is losing steam in China as well. Its operating profit has been shrinking since hitting a record high in fiscal 2012.

The food and beverage industry is also a mixed bag. While Thai Union Group's net profit declined last year, Nestle India continued to recover from a ban in 2015 on its most popular product, Maggi noodles. "The year saw Nestle India's single-minded commitment to build back Maggi noodles. ... We are now back to market leadership in the noodles category, with close to a 60% market share," said Suresh Narayanan, chairman and managing director of the Swiss company's India unit.

Keppel's net profit fell by nearly half on the year to 783.9 million Singapore dollars ($542 million). The company laid off about 10,000 workers at its offshore and marine unit last year. "We are going through a very long and harsh winter ... it is not business as usual," said Keppel CEO Loh Chin Hua at a news conference in January.

Meanwhile, Thai energy majors are rebounding. PTT, the country's largest company by market value, saw its net profit jump about 370%. In response to falling crude oil prices, PTT wrote down assets held by PTT Exploration and Production and others worth 72.8 billion baht ($2.03 billion) in 2015. This helped the company reduce its impairment loss in 2016 by 90% versus the previous year.

The country's largest coal miner, Banpu, returned to the black after a production cut in China pushed coal prices up. Its power generation business in Laos, Japan and China, as well as the shale gas business in the U.S. that was launched last year, helped raise its profit. CEO Somrudee Chaimongkol told reporters on Feb. 27 that the coal market had returned to normal in 2016 and that she expects prices to recover further in 2017. 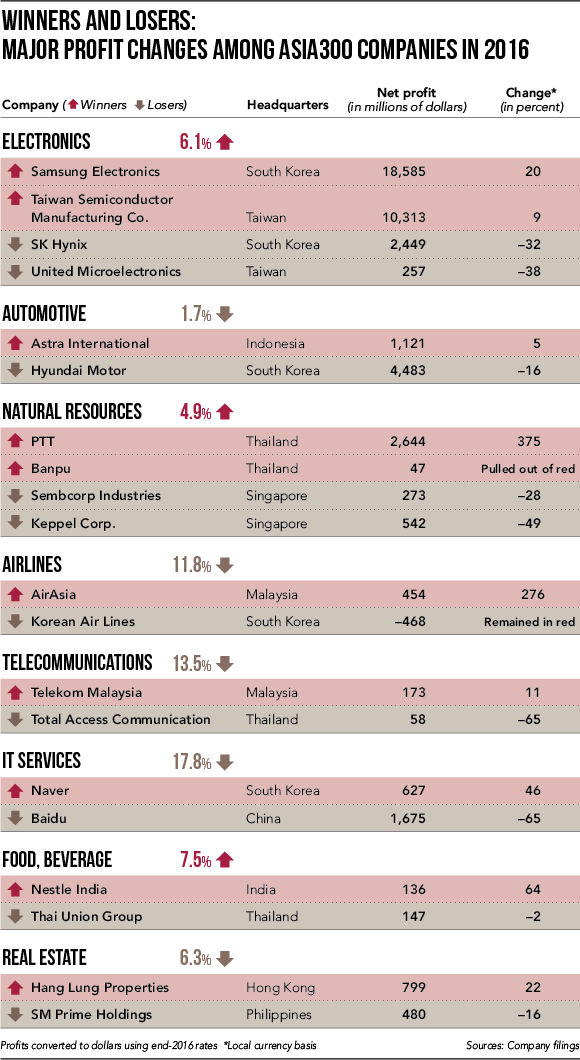 Although falling crude prices were hard on some resource companies, for the airlines, cheaper jet fuel was a shot in the arm. Thai Airways International, the national flag carrier, returned to the black for the first time in four years. AirAsia's fuel costs in 2016 fell more than 20% from the year before, helping the airline's net profit surge 276%, year on year. Another reason the low-cost carrier is doing better is that more people are flying. AirAsia had 56.59 million passengers in 2016, up 12% on the year. Its load factor rose 6 points to 86%.

Korean Air Lines, on the other hand, suffered a loss for the fourth straight year, although its earnings base improved. The airline's operating profit in 2016 rose 27% to 1.12 trillion won, its highest since 2010, thanks to fuller planes. But the collapse of Hanjin Shipping, in which the airline holds about a one-third stake, cost Korean Air more than 800 billion won, erasing most of that profit.

The spread of smartphones, and especially texting, is having a big impact in telecommunications. Data traffic in the form of texts, videos and photos is displacing voice as the main source of revenue for carriers. And fierce competition is causing earnings to diverge among competitors.

Total Access Communication, Thailand's second-largest mobile operator by subscribers, posted a large profit decline for the second year in a row in 2016 and will pay no dividend. Revenue from its data business rose, thanks to greater numbers of smartphone users, but that failed to make up for the decline in voice charges. The company is also bleeding customers because it has spent less on high-speed data infrastructure. As it tries to make up lost ground by spending more on base stations, its depreciation costs have risen, further denting profit.

Sales and profit fell at Taiwan's Chunghwa Telecom, compared with the previous year, due to fierce competition at home and a continuing decline in voice calls as messaging apps such as Line take hold. Telekom Malaysia, on the other hand, saw a higher net profit, partly because it was able to cover a 5% decline in voice revenue with higher data revenue.

Among IT service providers, China's top search engine operator Baidu is struggling. It posted its first net profit decline since its debut on the U.S. Nasdaq market in 2005. Last April, a college student died after trying an unproven cancer treatment the search engine listed among its top results. Baidu came under fire for taking large sums of money from dodgy sellers of medical treatments. Users have apparently drifted away since the scandal.

Last year's gloom notwithstanding, the outlook for 2017 is brighter due to expectations for a recovery in China's economy and commodity prices. The Nikkei Asian Review estimates the combined profit of 254 companies in the Asia300 Index will rise 14% to $469 billion, surpassing the record of $458 billion marked in 2014. Although profit forecasts tend to be optimistic at the beginning of the year, the Asia300 stock index recovered by more than 30% since its recent low in January 2016, as of March 7.

"As you come out of a deflationary environment, you expect companies to start making money. We will see substantial improvement in earnings this year and next year," said Credit Suisse's Tantia. Toshiyuki Murai, chief investment officer at Sumitomo Mitsui Asset Management in Hong Kong, is bullish on the infrastructure sector, including engineering and cement. The outlook is also good for domestically oriented businesses such as household goods makers, convenience stores and IT service providers.

But even if the experts are right in general, there will be plenty of individual companies that fall by the wayside. The enduring champions have yet to reveal themselves.

*Except where otherwise noted, the exchange rates used in this report are for end-2016.