China closes in on US, while India and South Korea also boost filings

TOKYO -- International patent applications filed from Asia exceeded half the world total for the first time in 2018, thanks to significant growth from China, India and South Korea. The landmark shows that Asian companies and institutions are rapidly increasing their presence in global innovation. Huawei Technologies filed the most in the world for a single company.

The World Intellectual Property Organization published a document on Tuesday reporting a record-breaking 253,000 filings of international patent applications in 2018 globally, a 3.9% increase over 2017. Of all the applications, 50.5% came from Asia.

The figures refer to patent applications made according to the Patent Cooperation Treaty, which coordinates on protection of patent rights and has over 150 members. Applications are treated as if they apply to all the parties, instead of the individual patent offices in each country or region.

When a company or institution files an international patent application, it shows that the applicant is interested in protecting their intellectual rights not just in their home country but in most of the world. Therefore, the rise in such applications shows that technological advances in Asia have grown to a level where more companies are tackling the global market.

China filed 53,345 international patent applications in 2018, an increase of 9.1% from the previous year. It remained in second place in the global ranking, following the U.S., whose applications numbered 56,142, down 0.9%. China is expected to surpass the U.S. in the next two years. A boy stands next to an iPal robot at the World Robot Conference in Beijing in August 2018. China filed 53,345 international patent applications in 2018, a 9.1% year-on-year increase.   © Reuters

China's telecommunication equipment manufacturer Huawei filed 5,405 applications, up 34.3% year on year and staying atop the global companies ranking. Although it is under pressure from Washington and its allies in government procurement for 5G network equipment, the results show its high level of research and development.

India, ranked 13th globally, saw its applications jump 27.2% from 2017 to 2,013. It was the highest annual growth among the top 15 origins, although there were no Indian companies in the top 50 applicants list.

Applications from Japanese companies remained high, though they ceded second place to Chinese companies in 2017. Japan filed 49,702 patents in 2018, a 3.1% increase, and stayed in third place.

Francis Gurry, WIPO director general, pointed out in a statement that there is a "historical geographical shift of innovative activity from West to East." 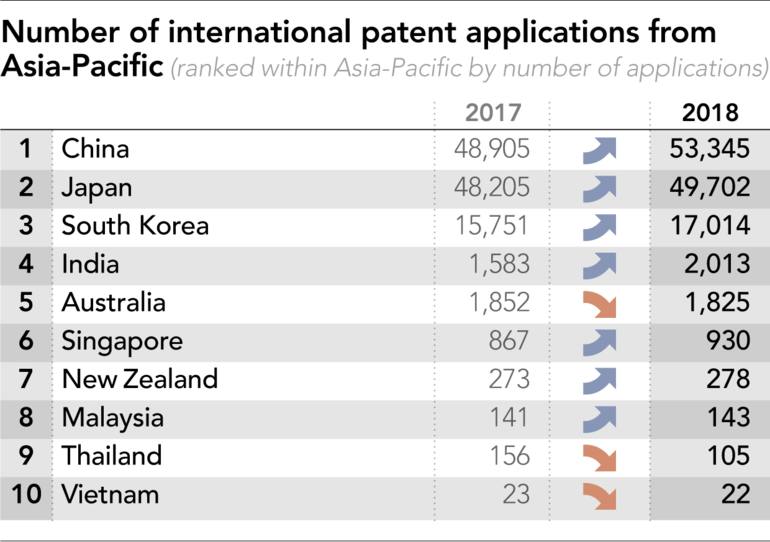 "Asia is now the majority filer of international patent applications, which is an important milestone for that economically dynamic region," he said.

Gaston Kroub, an attorney at Kroub, Silbersher & Kolmykov, a New York law firm specializing in intellectual property, said Asian companies of all sizes are "becoming much more sophisticated about how to develop and use intellectual property and protect themselves on a global basis."

"Within China itself, we're starting to see more Chinese domestic companies file for Chinese patents, and that behavior has been encouraged from the highest levels of the Chinese government," Kroub said. "Once a company becomes used to filing for patents, they are more likely to file for patents in other jurisdictions as well."

The rise of China in the patent ranking reflects the nation's expenditures in advanced technology. A Deloitte report titled "5G: The chance to lead for a decade" found that "Since 2015, China outspent the United States by approximately $24 billion in wireless communications infrastructure and built 350,000 new sites, while the United States built fewer than 30,000." The report noted that the U.S. has underspent China in wireless infrastructure by "$8 billion to $10 billion per year" since 2015.

China, now the Asian leader in international patent filings, is ready to keep strengthening in the field of intellectual property. Premier Li Keqiang, in the government work report at China's National People's Congress on March 5, said, "We are promoting the accelerated development of emerging industries and deepening research and development of applications such as big data and artificial intelligence."

"We are cultivating a new generation of information technology, high-end equipment, biomedicine and new energy vehicles," he added.

As for the ranking of educational institutions in WIPO's report, for the first time in 2018, Chinese universities appeared in the top 10, which comprises five universities from the U.S., four from China and one from South Korea. 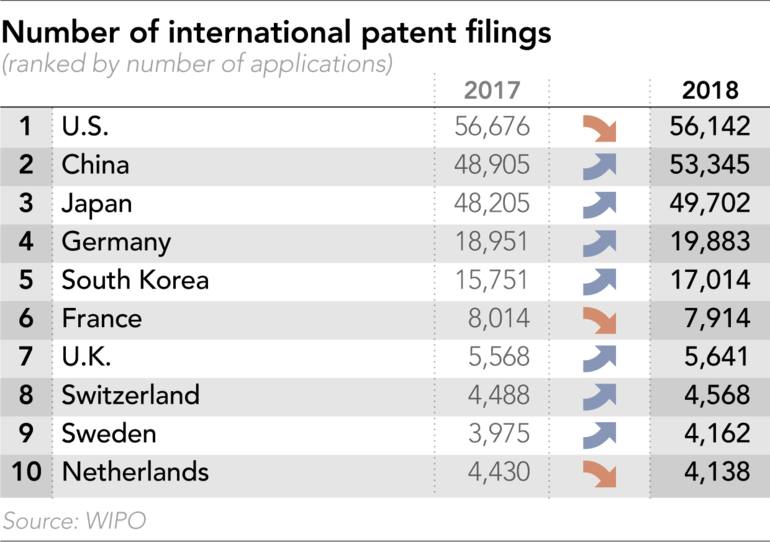 But there is a headwind for China, as the U.S. government criticizes China for poaching American intellectual property. China's ZTE filed for 2,080 patents in 2018, down 29.8%, with the company falling to fifth place from second in 2017. The U.S. government announced a ban on American technology exports to ZTE last April, leading to financial difficulties for the company.

WIPO also released a report on the ranking of international trademark applications. U.S.-based institutions filed 8,825 applications, the most from nations using WIPO's Madrid System for the international registration of trademarks in 2018. Germany was next with 7,495, followed by China with 6,900 and France with 4,490.

Asian countries such as Japan and South Korea achieved the biggest growth among the top 15 origins for international trademark applications. Japan filed 3,124 in 2018, up 22.8% from the previous year, while South Korea filed 1,305, up 26.2%.