Asia's economy deemed to be swayed by China slowdown in 2019

As headwinds build from trade war, all eyes turn to Beijing's stimulus measures A woman paints lanterns for the Lunar New Year in China's Zhejiang Province on Dec. 25. The country's economy is expected to heavily influence others in the region in 2019.    © Reuters

SINGAPORE -- China will again shape Asia's economic outlook in 2019 as the region's largest economy faces internal and external challenges, including trade tensions with the U.S.

Economists expect China's growth to slow versus 2018, affecting economies across Asia. All eyes are fixed on Beijing's response.

In line with global trends, the regional economy is likely to see slower growth in 2019, estimates by economists and governments suggest. According to Japanese investment bank Nomura, one of the key challenges faced by Asia is China's expected slowdown, especially in the first half of the year.

In 2018, China's growth slowed gradually, with gross domestic product expanding by 6.8% on the year in the first quarter, by 6.7% in the second quarter and by 6.5% in the third quarter, as the government cut back on infrastructure spending to try to reduce debt at the local level. Weaker car sales added to the slowdown.

Ting Lu, Nomura's chief China economist, expects much slower growth in the coming months. Pointing to the weak auto sales, which were a drag on consumption figures, he said, "We believe this kind of decline will extend all the way into the first half of [2019]." Lu also predicted sales of construction equipment will also drop in the first half of the year due to the replacement cycle and the end of stimulus measures aimed at encouraging purchases.

In addition to domestic factors, the U.S.-China trade fight will likely weigh on the Chinese economy. Data show that U.S. tariff increases on Chinese exports have started to bite, with the Chinese government's Manufacturing Purchasing Managers' Index showing declines in export orders over the past few months through November 2018. 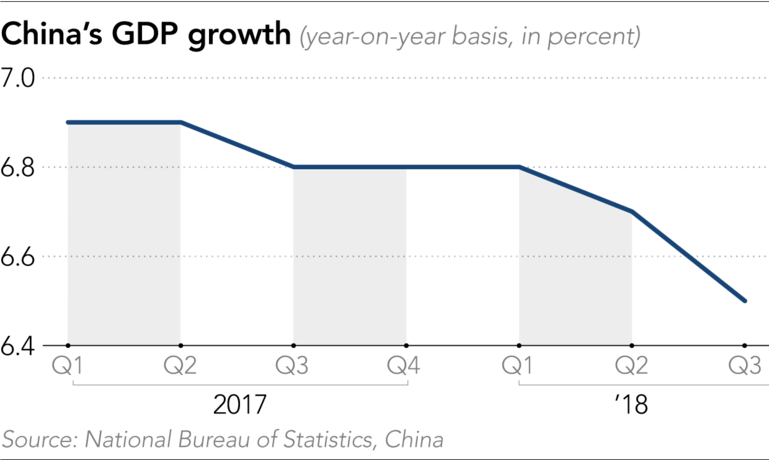 HSBC, a bank, said in a recent report that an escalation of the trade war could shave 0.7 to 0.8 percentage point off China's GDP growth in 2019. According to the latest China economist survey compiled by Nikkei, the country's economic growth is forecast to slow to 6.2% in 2019 from 6.6% in 2018.

Given that likelihood, market watchers are turning their attention to the steps the government will take to keep the economy ticking over. The leadership under President Xi Jinping already hinted at more fiscal stimulus, such as bigger tax cuts, at the annual Central Economic Work Conference in mid-December.

"The external environment is complicated and severe, and the economy faces downward pressure," the conference statement said. It called for "bolder and more effective measures" to implement a "proactive fiscal policy." The plan is to expand tax cuts and fee reductions beyond the roughly 1.3 trillion yuan ($188 billion) authorized for 2018.

A slowdown in China would have ripple effects across Asia, as it is a major trading partner for most countries in the region. That would also affect the region's market confidence. Most economies in Southeast Asia started to cool in the second half of 2018 as U.S.-China trade tensions escalated.

At the same time, growth in the technology sector is slowing worldwide, which will dent the growth of electronics exporters. The World Semiconductor Trade Statistics in November predicted the chip market as a whole will grow by just 2.6% in 2019, compared with 15.7% in 2018, due to weaker demand for smartphones. Output of electronics in places like Japan, South Korea and Taiwan may suffer. Sales at Taiwan's Largan Precision, one of the world's largest manufacturers of lenses for smartphone cameras, dropped nearly 30% on the year in November.

Another potentially destabilizing factor in Asia in 2019 is elections, and the political uncertainty that may result.

The first big electoral test in the region is scheduled for Feb. 24, when Thai voters head to the polls for parliamentary elections that will mark a milestone in the country's return to civilian rule.

"Even if a general election passes smoothly, political uncertainty is likely to remain a drag on Thailand's prospects," according to a report by Capital Economics. Pointing to the short-term risk from civil unrest, the report says, "Another outbreak of protests and violent conflict, similar to those observed in 2010 and 2014, would deal a significant blow to the economy." Indonesia will hold a presidential election in April, and there will be midterm elections in the Philippines the following month. India will also have a general election in May. Clouds on the political horizon are already affecting the region's third-largest economy, with central bank chief Urjit Patel resigning in December over policy differences with the government of Prime Minister Narendra Modi.

Some emerging economies may need to continue raising interest rates to keep local economies stable as the U.S. Federal Reserve hinted at more interest rate increases at its December policy meeting. On Dec. 20, stock indexes in emerging markets dropped when the Fed implied two rate hikes might be coming in 2019, on the heels of four the previous year.

Fed tightening tends to pull in capital to the U.S. from emerging markets, and that could cool domestic consumption and investment.

One positive factor would be lower oil prices, which peaked in late 2018. As many Asian economies rely heavily on domestic consumption, lower oil prices could help moderate inflation and boost consumer spending.