TOKYO -- Coronavirus-hit demand for migrant workers from Asia is expected to only recover unevenly and will hinge largely on economic rebounds in major destination countries, a new report warns.

Short-term economic growth in major destinations for Asian migrants, as well as origin countries, is expected to remain weak through 2021, according to the joint study by the Asian Development Bank, the Organization for Economic Co-operation and Development and the International Labor Organization.

In particular, the report points to weak demand from Gulf Cooperation Council nations, the main employers of Asian migrant workers, as well as in countries like Thailand and Vietnam, where tourism is a major source of jobs for them.

A few Asian economies, such as China and India, are primed for strong recoveries this year, though a record-setting virus surge is casting a pall over the latter.

All this suggests many of the region's most vulnerable people may find little relief from the pressures of COVID-19 in the months to come, while experts call for enhancing migrant workers' rights.

The pandemic has disrupted migration globally, with countries imposing strict entry rules as well as economy-squeezing lockdowns. Some key destinations have seen sharp declines in inflows and populations of foreign workers, the report shows.

The number of foreign nationals entering Japan on work visas plummeted 99.5% from April to August in 2020, compared with the same period a year earlier. In Saudi Arabia, work visa issuances were down 91% in the second half of 2020, versus the latter half of 2019.

Among origin countries, the Philippines -- the single largest origin country for the deployment of migrant workers -- saw a 60% year-on-year drop in the number of new hires from January to May 2020. Outflows from Bangladesh, the second main country of origin, were suspended during the second quarter of 2020, though in December the number rebounded to about half the year-earlier level. 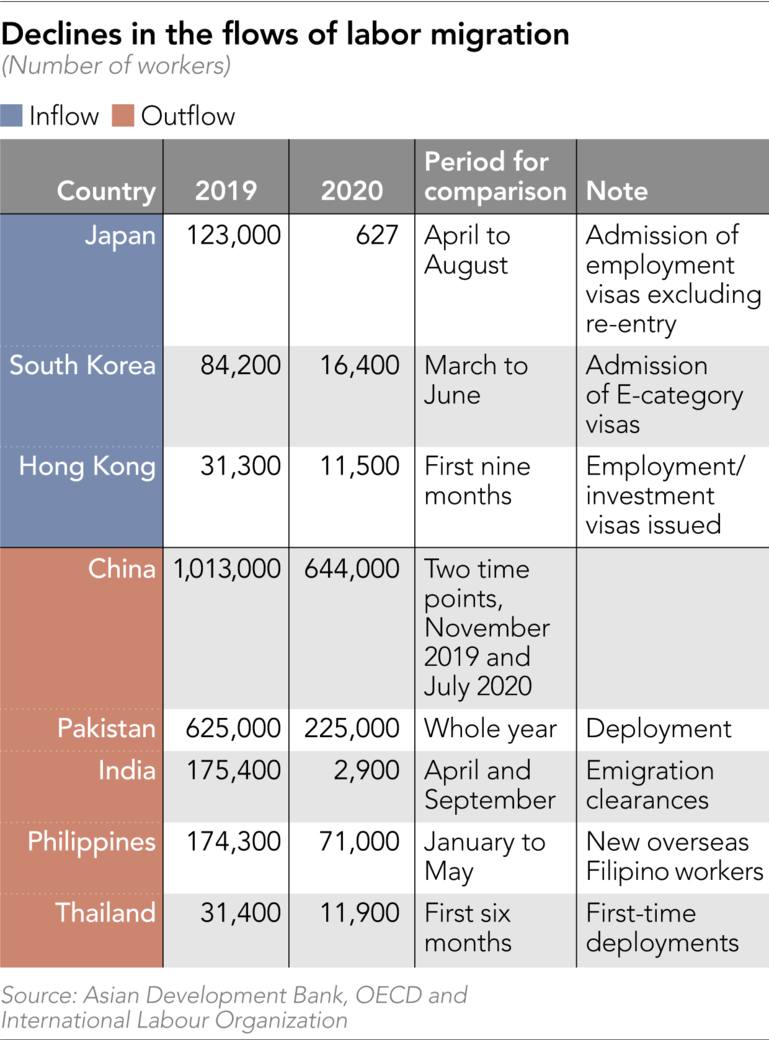 Many migrant workers were also forced to return to their home countries earlier than planned because of job losses or fear of contracting COVID-19 in host nations. As of April 2021, over half a million overseas Filipino workers had returned to the Philippines, according to the ILO's Nilim Baruah.

Jean-Christophe Dumont, head of the OECD's international migration division, observed: "The pandemic is leading to a very severe economic crisis, so the scope and nature of labor rights need to be changed. And we'll even change more quickly because the pandemic is also acting as an accelerator for change, notably for automatization and digitalization."

Dumont added that other factors including falling oil prices, Brexit and changes in migration policies in the U.S. will also have an impact on labor migration in Asia.

The disrupted labor migration, meanwhile, has resulted in a decline in remittances back to Asian countries -- likely the sharpest decrease ever, the report says. The World Bank projected in October 2020 that remittance flows to low- and middle-income countries will fall by 7% in 2020 and another 7.5% in 2021.

In the new report, the ADB estimates that total remittances to Asia stood to drop by up to $54.3 billion in 2020, assuming it takes countries more than a year to get COVID-19 outbreaks under control and start to normalize economic activity. South Asia would be the hardest-hit subregion in the ADB's calculations, recording a remittance loss of $28.6 billion in the worst-case scenario. There are exceptions. Remittance inflows into two South Asian countries -- Pakistan and Bangladesh -- actually rose significantly in 2020, according to World Bank data. But a February 2021 report by the Economist Intelligence Unit attributed the increase to "factors unique to 2020," including the repatriation of overseas savings by nationals returning home after losing jobs, a shift in flows to formal channels as travel restrictions made informal transfers harder, and the introduction of new remittance tax incentives.

The EIU report warned of an increased risk of remittances falling in 2021 for Pakistan and Bangladesh, both of which rely heavily on the funds for their current-account credits.