SINGAPORE -- Rapidly aging populations and skyrocketing medical costs are set to squeeze Asia-Pacific countries. The region's annual health care spending on people 65 and older is expected to reach $2.5 trillion by 2030, a fivefold increase from last year, according to Marsh & McLennan Companies, a U.S.-based risk management consultancy. 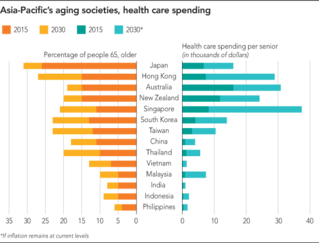 MMC on Wednesday released a report that sees the Asia-Pacific region spending $20 trillion on senior health care in the next 15 years -- half of the region's total healthcare expenditures.

The research, conducted in 14 markets in East Asia, Southeast Asia and Oceania, shows that the region is aging faster than any other part of the world as life expectancy increases in line with medical advances and rising incomes.

While seemingly everybody hopes for a longer life, the Asia-Pacific region as a whole lacks the capital, infrastructure and human resources to handle the oncoming surge in demand for medical care.

The report estimates that the region will be in need of an extra 18.2 million professional long-term caregivers by 2030. China alone will need another 9.3 million.

In addition, the report says many countries in the region are short of medical infrastructure, such as elderly care centers, and lack adequate social safety nets. There is dire need for affordable medical insurance and mortgage schemes, the report adds, noting neither public nor private players have filled this gap.

All this will weigh on the region's citizens and governments. Without medical centers to take aging relatives to, family members will have to act as caregivers themselves. This will reduce the workforce's productivity.

"As countries age and the [overall] workforce shrinks, it just  exacerbates the problem," Hedrich said.

Also, increased spending on public healthcare can reduce governments' capacity to invest in other sectors.

On the other hand, surging demand for medical care will create business opportunities. Countries like Thailand and the Philippines are popular locations for retirement homes. In addition, companies like Malaysia-based IHH Healthcare and Thailand's Bangkok Dusit Medical Services are expanding to cater to the increasing number of medical tourists.

But while investments in the luxury elderly care sector is booming, many middle to low income seniors in developing countries cannot afford adequate health care.

The report warns that middle to low-income countries "may not have sufficient time to achieve a high level of economic development before the detrimental effect of societal aging occurs."

Even countries with young populations, such as Vietnam, should move quickly, the report suggests. Technological innovations, more medical facilities, lower costs and preventative care are needed.

"Given the run-up time for necessary investments," Hedrich said, "this is not something you can put off for 15 years."