The headline Nikkei ASEAN Manufacturing PMI rose 0.3 point from January to 50.3, moving above the 50 boom-or-bust line for the first time since September.

Vietnam topped the region, with its PMI hitting a 21-month high of 54.2, driven by stronger consumer demand. According to the PMI survey by IHS Markit, new orders from abroad increased in the consumer and investment goods sectors. The Philippines had the second-highest reading, at 53.6, due in part to a faster expansion in new orders and employment.

Indonesia, meanwhile, fell into contraction territory, with a reading of 49.3, down from January's 50.4. About 19% of survey panelists reported thinner order books, citing deteriorating purchasing power among customers. 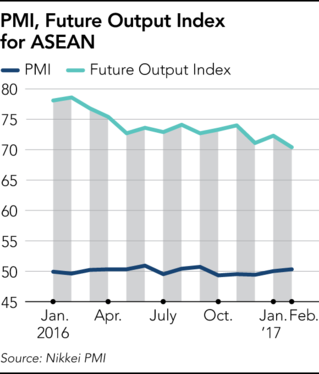 Despite the improvement in the headline number, the Future Output Index, which indicates production expectations over the next 12 months, hit its lowest point in 32 months, at 70.4 in February, down from 72.3 the previous month.

Vietnamese manufacturers were more optimistic about prospects for business. The Future Output Index for that country hit a 12-month high at 80.2. Two-thirds of respondents predicted a rise in production, as companies look to expand and capitalize on expected growth in consumer demand.

By contrast, the future gauge dropped in most Southeast Asian countries. Indonesia's hit a 21-month low, though it is at a high reading of 87.5. The cooling reflects concerns about competitive pressures and the global economic climate, according to the survey.

The Philippines, while still showing optimism, saw its future output reading fall to a four-month low of 86.0. The indexes for Myanmar and Singapore hit record lows of 53.0 and 42.2, respectively.

"In part, fairly weak demand for ASEAN goods explained the confidence divergence, especially for countries that depend more on overseas demand for growth. Recent weakness in regional currencies has not [been] seen to provide a boost to foreign demand, but instead aggravated a rising cost environment," said Bernard Aw, an economist at IHS Markit.

Another key trend observed in the latest PMI was India's recovery from the downturn caused by demonetization -- the pulling of high-denomination bank notes from circulation. The manufacturing and services PMIs both ended in expansion territory for the first time since October. The manufacturing PMI rose to 50.7 from January's 50.4, while the services PMI rose to 50.3 from 48.7.

Manufacturers are noticing the recovery. In early February, an executive with Japan's Suzuki Motor, which has a large share of the Indian auto market through its subsidiary Maruti Suzuki India, told reporters at an earnings briefing in Tokyo: "The impact [of demonetization] on the whole economy is still unclear, but the situation around us is gradually regaining stability." 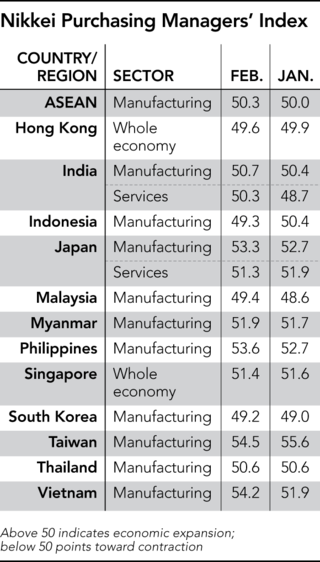 But the future index for February marked a 12-month low of 55.0 for the service sector and a two-month low at 53.5 for the manufacturing sector. "It is still too early to state that expansion rates will climb to their trend levels in the near term," said Pollyanna De Lima, an economist at IHS Markit. "So far, firms are doubtful about the sustainability of the economic recovery."

The PMIs for the rest of Asia remained in either expansion or contraction territory. Japan's manufacturing PMI rose from 52.7 to 53.3, while South Korea's improved slightly to 49.2 and Taiwan's dropped 1.1 points to 54.5.