SINGAPORE -- Central banks in Asia will have to consider reversing their monetary policy after a year of tightening as the pace of inflation slows and economic outlooks remain uncertain, economists say.

Last year, many Asian economies moved to tightening to support weakened local currencies, as well as to avoid capital outflows in response to repeated rate hikes by the U.S. Federal Reserve.

Among those countries was Singapore, which awaits a semiannual monetary policy decision, due Friday morning.

The Monetary Authority of Singapore, the central bank, tightened its policy last April for the first time in six years, followed by additional tightening in October. The city-state bases monetary policy on the exchange rate, whereby the Singapore dollar is managed against a basket of currencies of major trading partners. Guiding the local currency to appreciation means tightening.

Most economists believe Singapore will pause tightening this time and keep policy unchanged, as its core consumer price index growth rate slowed to 1.5% on the year in February from 1.7% in January, making it the lowest since last May 2018.

"The disappointing trade backdrop [stemming from U.S.-China tensions], which has been feeding into growth concerns, along with the recent decline in core inflation, could tip the scales in favor of the MAS staying on hold in April," said Bank of Singapore currency strategist Sim Moh Siong.

However, Singapore could move to monetary easing later this year, according to economists at Capital Economics. "It is likely to leave monetary policy settings unchanged in April, but if the weakness in the economy continues, we think the MAS will reverse course and loosen policy at its meeting in October," they wrote in a note dated March 29. 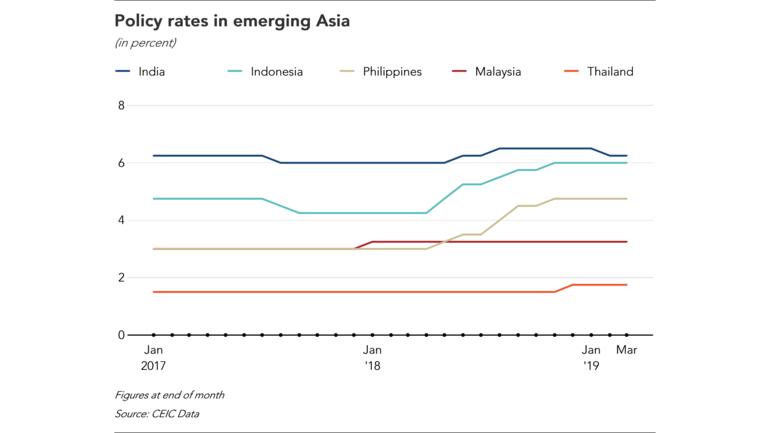 The Philippines may also ease the policy later this year, according to Citigroup's forecast, as the country's headline CPI growth rate declined for the sixth consecutive month from its peak in September.

"We maintain a forecast of 25 basis point policy rate cut each in the fourth quarter in 2019 and the first quarter in 2020," according to Citigroup. The country has maintained its policy rate at 4.75% since November, when the central bank raised a total of 175 basis points over the year to support the peso and cool down heated inflation.

While central banks in Asia shifted tightening last year, the economic outlook has gradually darkened due to an expected slowdown in China and the trade conflict between the world's two biggest economies, as well as a slump in the semiconductor industry. These have hit Asian businesses hard, with export demand and industrial output slowing in many markets. Easing monetary policy would help businesses borrow and expand.

Among major Asian economies, India in February became the first mover to reverse the policy, lowering the policy rates from 6.5% to 6.25%. The Reserve Bank of India on April 4 again lowered the rates to 6%, justifying the second successive move by subdued inflation, which some analysts saw as a political move by Prime Minister Narendra Modi ahead of the general elections due to take place this month and in May.

Over the last year, India raised policy rates from 6% to 6.5% as the Indian rupee depreciated sharply against the U.S. dollar amid the Fed’s tightening.

Other Asian countries have yet to move to easing, keeping the current rates for the last few months.

Indonesia’s policy rate has stayed at 6% since November, as the central bank raised its policy rate a total of 175 basis points from 4.25% since May. Malaysia has also maintained the 3.25% level since January 2018, when the Bank Negara Malaysia raised rates for the first time in three and a half years from 3%. Bank Indonesia will decide monetary policy on April 25, and Malaysia on May 7.