LONDON/NEW YORK/TOKYO -- Asian companies warned of the damaging fallout from a possible "no-deal" Brexit after the British Parliament on Tuesday struck down Prime Minister Theresa May's plan setting out the terms for the country's departure from the EU.

The crushing defeat for May adds yet another layer of uncertainty to a global economy already feeling the weight of the U.S.-China trade war.

Experts agreed that the implications for Asia would be huge, from companies being forced to review investment strategies, to governments exploring new trade deals as the U.K. looks to sign alternative free trade agreements.

A sudden change in the trading relationship between the U.K. and the EU would have "serious implications for British industry," said a spokesperson for Nissan, which runs its largest European plant in the U.K.

"We urge U.K. and EU negotiators to work collaboratively toward an orderly balanced Brexit that will continue to encourage mutually beneficial trade."

Lee Bo-sung, a vice president at South Korea's Hyundai Motor Group, said Brexit is "definitely a negative factor to us" because its production lines are based in Slovakia and the Czech Republic, exposing the company to potential tariffs in the U.K. But Lee added that it "may have an edge compared to global automakers which have their production lines in the U.K."

A spokesperson at Honda Motor said that the U.K.'s departure from the EU without a withdrawal agreement would pose "serious challenges" to the company's highly integrated European business. "New checks at the border could disrupt our just-in-time logistics systems, while the imposition of tariffs on the movement of goods between the EU and U.K. would have an impact on our competitiveness," the spokesperson said.

Some companies said Tuesday's vote leaves them with greater uncertainty over the future for the U.K.'s relationship with its biggest trading partner.

Hitachi, the Japanese industrial conglomerate, is "investigating the impact on our businesses, taking into account the possibility of a hard Brexit," according to a spokesperson.

The South Korean Finance Ministry said the government had "decided to take necessary actions in advance, considering the worse scenario of a no-deal Brexit," and that it would "speed up our preparations for signing Korea-UK FTA as soon as possible after Brexit."

Takaaki Hanaoka, secretary-general of the Japanese Chamber of Commerce and Industry in the U.K., said: "Our hope is for a friction-free agreement, and for the schedule of the agreement to be made clear quickly. We do not want it to be a no-deal."

Hopes for a gradual transition to the new reality were shattered on Tuesday as the House of Commons rejected May's Brexit plan by 432 votes to 202. Opposition leader Jeremy Corbyn tabled a motion of no confidence that could push May out of office and trigger a general election if passed.

The U.K. and the EU had agreed to keep existing rules in place until the end of 2020 as a transition period, so that businesses and government agencies could have time to adjust. Now, there is a growing possibility that the U.K. will be forced out at the end of March 2019 without any kind of buffer, barring a further extension or cancellation of Brexit.

The immediate impact of a no-deal Brexit could be a 10% drop in the pound's value, global macro research consultancy Fathom Consulting predicted. For companies, new tariffs are expected on goods shipped to and from the bloc. The British economy may suffer even further if a wave of financial companies and manufacturers move their European headquarters from London to Paris or Frankfurt.

"Asian companies will have no choice but to move operations to the European Continent, if the U.K's unfettered access to European markets is blocked," said Edward Alden, a senior fellow at the Council on Foreign Relations. "It will be a big negative for the U.K. and costly for companies," he said. 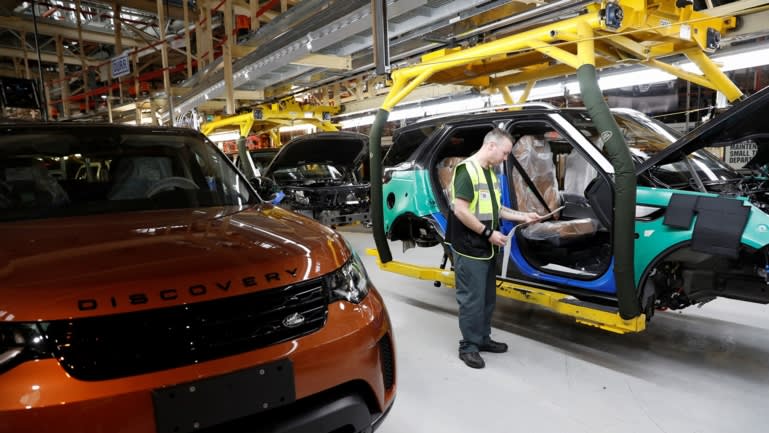 A Jaguar Land Rover factory in Solihull, U.K. The automaker has been shifting more production to cheaper countries like Slovakia.   © Reuters

Already, companies have been adjusting their playbooks. Jaguar Land Rover, which is owned by India's Tata Motors, recently announced that it would cut 4,500 jobs, largely in the U.K. The move represents a reduction of more than 10% to its roughly 40,000 employees in the country. The automaker also laid off 1,500 workers in 2018.

The auto industry will likely be impacted especially heavily, since many companies use just-in-time inventory systems procuring exactly what they need when they need it. If customs procedures are reinstated between the U.K. and EU countries, auto supply chains could be plunged into chaos.

The effects of a no-deal Brexit will be seen "within hours," said Mike Hawes, chief executive of the Society of Motor Manufacturers and Traders.

Anthony Kim, a senior policy analyst at The Heritage Foundation, a Washington-based think tank, said Asian companies such as Samsung Electronics and Hyundai Motor could reduce their exposure to the European uncertainty and shift investment to the U.S.

"In the name of utilizing the U.S.-South Korea free trade agreement, these companies could put their strategic investments in the U.S., especially as the U.S. enters a presidential election next year," he said.

Eager to preserve its relevance in the global economy, the U.K. is expected to look for alternative trade deals. "The U.K. will be very aggressively pursuing trade agreements with Asia and the U.S.," CFR's Alden said.

Heritage's Kim said the U.K. will be conducting a proactive trade policy. "Liam Fox, the U.K.'s secretary of state for international trade, has been traveling across the world over the past two years, to like-minded countries such as the U.S., South Korea and Japan, talking of bilateral free-trade deals and the Trans-Pacific Partnership," he said.

Bill Reinsch, the Scholl Chair in International Business at the think tank Center for Strategic and International Studies, said that the U.K.'s appetite for trade deals will be determined by the terms of Brexit. "If it is a no-deal Brexit, the U.K. will go full speed ahead to sign as many trade deals as possible," including the TPP, he said.

"If the U.K. were to enter TPP, it would break a threshold since it would be the first member that does not have a geographic presence in the region," Reinsch said.

Isaac Stone Fish, a senior fellow at the Asia Society's Center on U.S.-China Relations, predicted that China will be the one to step in to fill the void. "Some in the U.K. government will see China as the economic savior," he said, predicting that Beijing will deepen trade links and investments, possibly offer loans and sign key high-profile deals to cement the new ties.